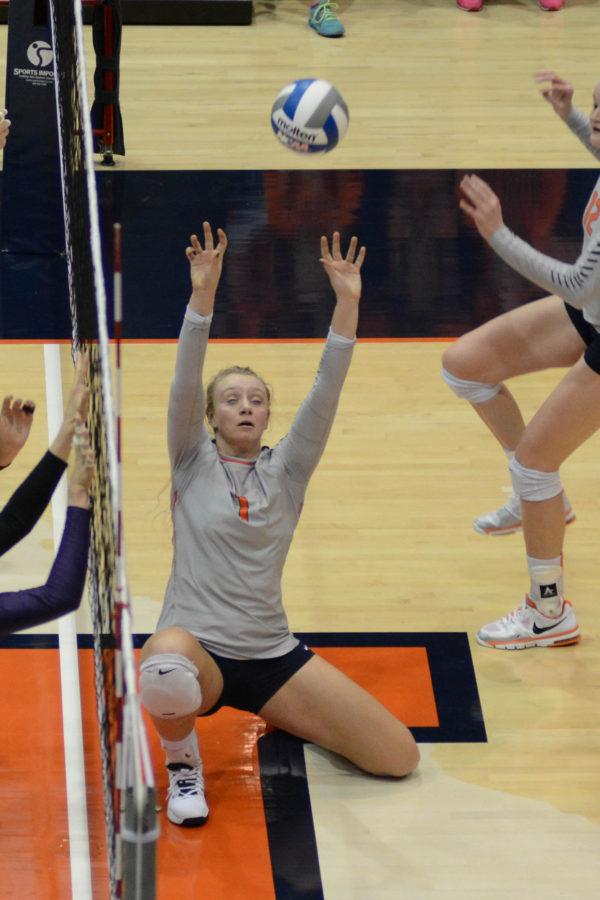 Illinois' Jordyn Poulter sets the ball during the match against Northwestern at Huff Hall on Nov. 7, 2015. Poulter is this week's Illini of the Week.

When the NCAA tournament seeding was announced Sunday night, Illinois was placed in No. 15 Louisiville’s regional. The team will open the tournament against Southern Illinois, and will play the winner of the Louisville-Belmont matchup.

Hambly said that despite the team not being given its own regional for the first time in his tenure as head coach, it is convenient that the Illini will not have to travel an excessive distance to play its first round.

“I think that as far as the potential as to where we could have gone, I would rather be (in Kentucky) than somewhere like Texas,” Hambly said. “I think in that case, it’s an easy trip for us and it’s against an opponent that we know. It’s at a place that we know well because we played there last spring.”

Senior Jocelynn Birks hopes the team can turn it around in the tournament after an underwhelming regular season. The outside hitter will be leading the team in her last post-season appearance, in which she hopes the team can make a surprising run.

“You always want to strive for something better than what you have,” Birks said. “We have a great chance to make a run. I think that where we are placed, we have a nice opportunity ahead of us.”

That “opportunity” will start against Southern Illinois, who the Illini swept in the 2014 Illini Classic. Hambly said that although Illinois will have a clear advantage from a physicality standpoint, Southern Illinois’ speed could pose a problem.

Hambly pointed out that the team will need to be very aware of its one-on-one matchups because of how quick the Salukis run their offense. Setter Jordyn Poulter and opposite hitter Naya Crittenden will be counted on to lock down the net and prevent Southern Illinois from finding its rhythm against the Illini.

If Illinois makes it past Southern Illinois, its second-round opponent will likely be Louisiville, another familiar opponent. The Illini faced the Cardinals in the first match of the season and had little trouble en route to a sweep of the Cardinals.

Louisville started the season 2-3 with all three of its losses coming at the hands of Big Ten teams. But following the mediocre start, the Cardinals rebounded and went on to claim the ACC Championship.

Illinois faced a much different road to the tournament. After starting the season 9-2, the team floundered in Big Ten play, finishing with a 10-10 record.

Hambly attributed the team’s struggles to its lack of emotional investment in tight matchups, and he echoed the same sentiment again this week with the team looking to make a run in the tournament.

“Early on, we lost some tight sets,” Hambly said. “Then we got into those tight sets later, I felt like we were backing down instead of sorting it out and figuring out how to win some of those tighter sets … If we are emotionally in this thing, we can probably pull some of these sets off. But we have to have these beliefs and not hold on to the history of what has happened in the season.”