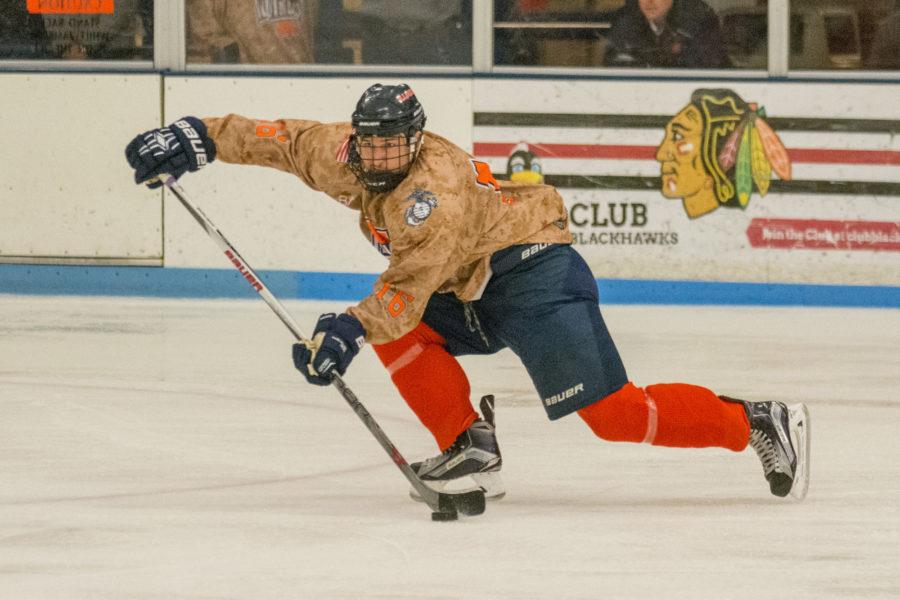 John Olen sends a pass across the ice during the game against Iowa State at the Ice Arena on Saturday, Nov. 14. Illinois lost 3-2 in a shootout.

Tweet: [email protected] looks to make a jump in the conference standings this weekend against Robert Morris University

The Illinois hockey team had last weekend off due to the Thanksgiving holiday festivities and feasts — a break the Illini desperately needed after their 8-0 loss to Lindenwood University on Nov. 21.

This weekend, Illinois (10-5-3) will be back in action as they look to snap a three-game-conference losing streak against CSCHL rival Robert Morris University (12-7-0).

After losing a heart-breaking eight-round shootout to Iowa State, then dropping both games of a road series with conference-leading Lindenwood, the Illini find themselves second-to-last in the CSCHL. As Illinois starts its second and last cycle through its conference schedule, there is little room for the type of inconsistent play the Illini have shown all season.

“The biggest thing for us up to this point was just getting healthy and staying healthy,” head coach Nick Fabbrini said. “This isn’t a group to use injuries as an excuse, but we’re a completely different team when we’re healthy.”

With senior captain John Olen back in the lineup and at 100 percent, the Illini believe they now have the roster to make a run at the conference title — and this weekend is a prime opportunity to make a major move up the league standings.

Robert Morris sits at the bottom of the conference, and match up fairly even Illinois.

The Eagles have scored a total of 64 goals and have allowed 51, and the Illini have netted 61 goals and giving up 55. Each team has given up 30 goals on the road and have three conference wins.

The teams’ prior meeting this season was Oct. 16-17 at Illinois Ice Arena and the two games resulted in a series split, the Illini losing the first game 4-1 and winning the latter 5-3.

With only one point separating Illinois from third place Ohio and four points from league-leader Lindenwood, a series sweep could catapult the Illini as high as second in the CSCHL.

“One of our goals every year is to win the regular-season conference title to put us in the best position possible for tournament play,” Fabbrini said. “We’ve dropped some games we really needed, now every league game is crucial.”

Illinois has the offense to make a run.

With the line of Grant Stueve, James Mcging and Eric Cruickshank, who have combined for 56 points, and Olen now acclimated to the veteran line mates Josh Belmont and Shaunak Pal, the Illini have proven they have the firepower to match nearly any team in the country.

However, the Illini give up almost twice as many shots as they take.

In their last four games, the Illini have allowed 192 shots on goal while only producing 113. Even with goalie-stand out Joe Olen in net, the sheer volume of shots Illinois faces creates a hole it often can’t score its way out of.

“Our defensive zone needs work,” John Olen said. “We’ve given up too many power plays and have just been struggling to find our guys and clear the puck.”

The Illini have had impressive wins this season: shutting out ACHA top-five Ohio and beating then No. 2 Iowa State in a shootout. Although, disappointing losses to teams like Illinois State and Oklahoma have diminished such feats. This weekend has the makings of a statement series for Illinois, not to the players themselves but for the league.

“We know how talented we are,” Austin Zima said. “we just have to show it.”