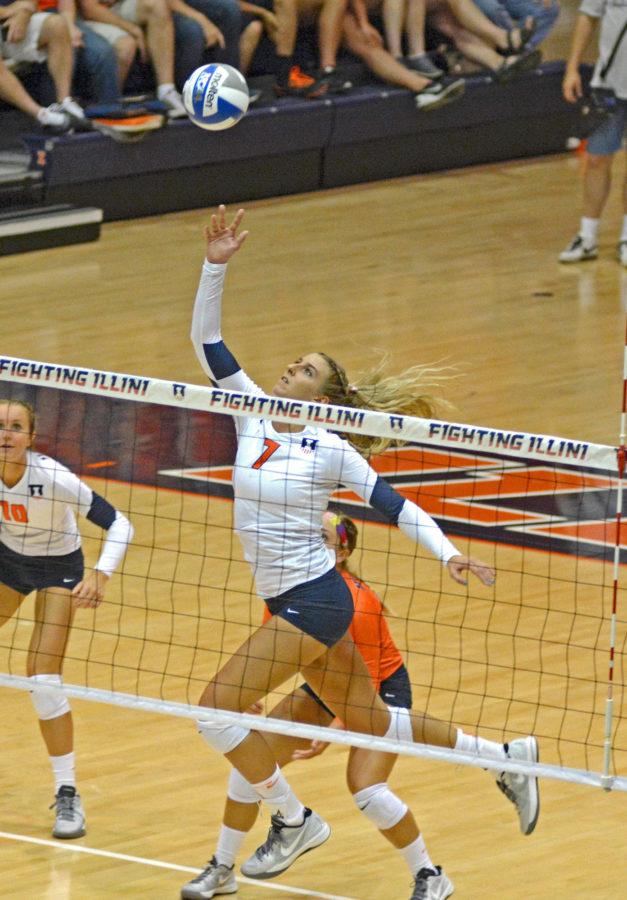 Illinois’ Jocelynn Birks (7) attempts to dink the ball during the game versus Louisville at Huff Hall on Friday, August 28, 2015.The Illini won 3-0.

After dropping the first set against Louisville in a hostile environment, Illinois volleyball head coach Kevin Hambly had a message for his team: Calm down.

Frantic play has been a cause for concern for the Illini over the course of an up-and-down regular season. But in their second-round NCAA tournament matchup with the Cardinals on Saturday night in Louisville, Illinois was able to right the ship and took three straight games to win the match (15-25, 25-22, 25-18, 27-25).EJ

“I think (Louisville) came out hot and the energy and the crowd was behind them,” Hambly said. “I thought we were a little bit nervous. It was tight and competitive, and we had to work through that emotionally. I thought we turned the tide in the second set though.”

The team entered the match coming off a sweep Friday of first-round opponent Southern Illinois (25-19, 25-15, 26-24).EJ Setter Jordyn Poulter said the Salukis played a fast style offense the Illini were unaccustomed to playing against.EJ Because of that, Poulter believes the team found itself out of rhythm to start the match against the Cardinals, which led to several mistimed blocks.

Once the team found its momentum in the second set, it relied heavily on the stellar play of outside hitter Jocelynn Birks.EJ The senior racked up a season-high 26 kills off a .426 hitting percentage.EJ

Hambly said it was one of the best games he has seen from Birks. He particularly praised her leadership in the huddle, which helped calm the team down when it was facing adversity after the first set.

“I think it was one of the best matches I have ever seen her play from top to bottom,” Hambly said. “She played inspired . . . She kept us calm and was saying the right things in the moment. That’s a big deal. I thought she did a good job of that all weekend.”

The Illini maintained steady leads throughout the second and third sets, hitting above .300 in both.EJ It looked like the team would be able to finish the match in similar fashion in the third set, but the desperate Lousiville team went on a 5-0 run after being down 24-21.

Poulter said the team had been in similar situations before, and had trouble ending the set once its opponent gained the momentum. Fortunately for the Illini, a pair of blocks from freshmen Poulter and Ali Bastianelli sealed the victory and destroyed the home crowd’s hope of a comeback.EJ

“Their crowd was getting really into it. It could have been really easy for us to give up there and that probably would have transpired into the fifth set,” Poulter said. “Who knows what would have happened in that? Even though we were struggling, we focused on ourselves and were able to close out the set.”

The team will move onto the Sweet Sixteen to take on Big Ten champion and national No. 2 seed Minnesota in Des Moines, Iowa. It will be the third straight year that Hambly’s team has reached this point in the tournament. With a chance to redeem its underwhelming conference play, the head coach is interested to see if his team can achieve its full potential this Friday.