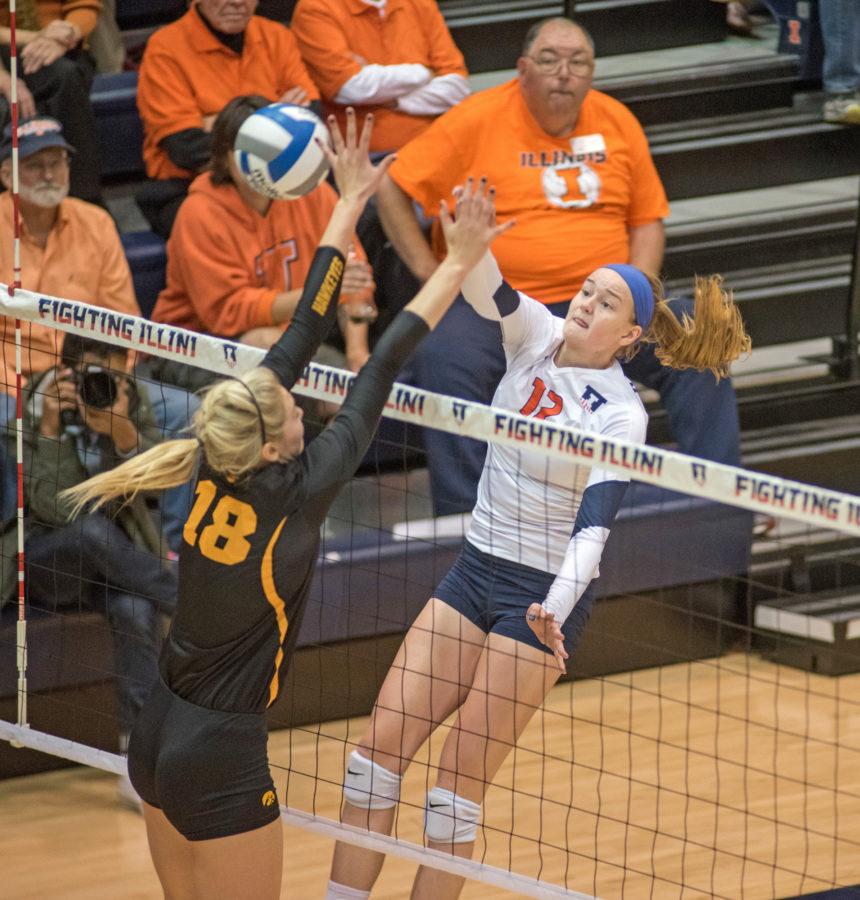 Katie Stadick spikes the ball during the game against Iowa at Huff Hall on Friday, Oct. 16. Illinois won 3-0.

With its win on Saturday night, the Illinois volleyball team advanced to the Sweet Sixteen of the NCAA tournament for the third straight year.

Illinois is one of six Big Ten teams to advance to its respective regional semifinals. Of the remaining Big Ten teams, the Illini have lost to all of them over the course of the regular season, including Sweet Sixteen opponent Minnesota.

However, after Saturday’s victory over Louisville, setter Jordyn PoulterCC said the team has come a long way in the weeks leading up to the NCAA tournament. She believes that the team is more prepared mentally to take on some of the best teams in the country.

“I think we figured ourselves out a lot more, especially in these past few weeks,” Poulter said. “It’s always fun to go up against an opponent that you have already played, and I think we will have that mindset next week when we go up against Minnesota.”

Stadick leads the way over Salukis

In the team’s opening round match against Southern Illinois, middle blocker Katie StadickCC led the way for the Illini.

The junior recorded 12 kills on a .632 hitting percentage, which was her highest this season. On the defensive end, she added four blocks. She followed up her Friday play with a seven-kill and three-block performance Saturday against Louisville.CC

Stadick credited Poulter for putting the ball in good positions for her to execute a good spike. Head coach Kevin HamblyCC agreed with her sentiment and added that the coaching staff pushed Stadick in practice leading into the match to overcome her offensive trouble in the regular season.

“She has been struggling offensively,” Hambly said at Friday’s press conference. “We made a couple of changes and got on some things, and I thought she did a nice job of getting on the slide … I thought Katie started to play with a little bit more confidence as she has shown throughout this week.”

Poulter facilitates offense throughout the weekend

In her first taste of post season volleyball, Poulter helped guide the team past its first two tournament opponents.

She recorded 34 assists and 10 digs against Southern Illinois and then followed that up with 46 assists and six blocks against Louisville. In addition, the freshman recorded the match winning block to end the Cardinals comeback attempt.CC

Hambly praised Poulter for helping the team maintain its composure during the heated final points of the fourth set Saturday. He added that Poulter was able to get her teammates involved in the action and helped set up outside hitter Jocelynn Birks’CC 26 kill performance — two shy of the program kill leader’s single-game high.

Poulter said the team kept calm in the big moments of both matches over the weekend, which was a big contributor to its victories.

“I think that the team that we were two weeks ago would have just crumbled. But (on Saturday), we focused on what was ahead of us and not get caught up in previous plays, and we were able to pull the win out.”