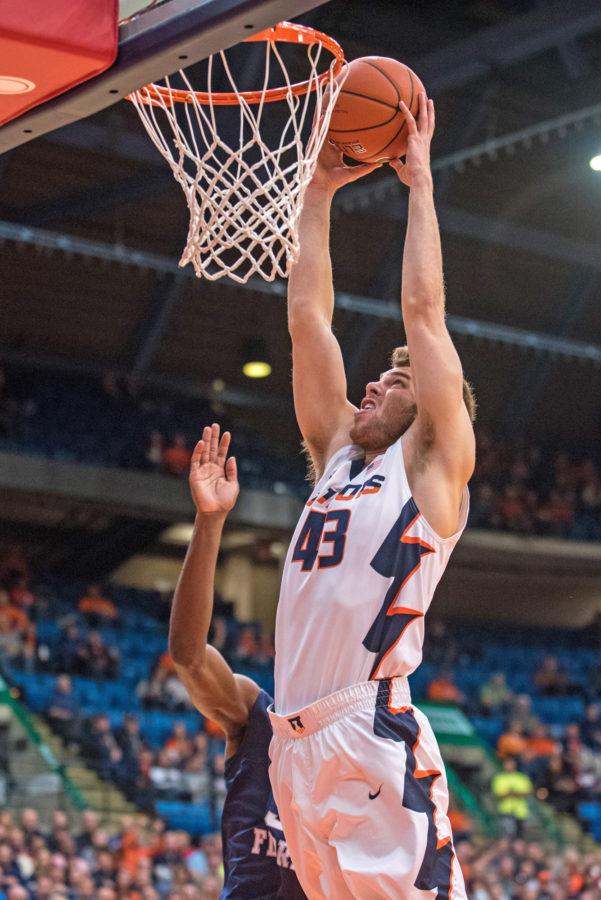 Forward Michael Finke jumps to dump the ball during the game against North Florida at the Prairie Capitol Convention Center on Friday, Nov. 13. Illinois lost 93-81.

From his spot on the right wing, Yale point guard Makai Mason lofted a perfect pass to a cutting Nick Victor, who caught the ball mid-air at the rim. Victor failed to convert the set-play alley-oop in the second half of Yale’s win against Vermont on Saturday, but reigning Ivy League Player of the Year Justin Sears wasn’t ready to let the possession die.

After setting the screen which got Victor open originally, Sears followed the rock’s trajectory after his teammate’s miss and threw down a one-handed poster dunk on Vermont’s 6-foot-9 forward Ethan O’Day. Yale went on to beat the Catamounts by 18.

Sears and the Bulldogs (5-3) are headed to Champaign for a matchup with the Illini (4-5) on Wednesday at 7 p.m. Illinois is coming off an 80-68 win over Western Carolina on Saturday, in which shooting guard Kendrick Nunn (27 points) and forward Michael Finke (24 points) attained career-high scoring totals.

Head coach John Groce has harped on team defense ever since the Illini gave up 17 3-pointers in a loss to North Florida in their season opener. After Saturday’s win, Groce said his team began to ratchet up the intensity on that end of the floor after Western Carolina tied it up at 50 in the second half.

“From that point on, our defense got really stingy,” Groce said. “I’ve been waiting to see that in the guts of the game.”

“There’s nothing he can’t do,” Groce said.

The only knock on Sears’ game last season was his vision; he dished out only 1.5 assists per outing. He’s more than doubled that per-game number this season to 3.1.

The Plainfield, New Jersey, native possesses unique footwork, which he developed from playing tennis starting at age 4. In an October interview with SLAM Magazine, Sears said Manu Ginobili and Al Jefferson are the two NBA players he studies the most.

“They’re unorthodox with their footwork,” Sears told SLAM. “It’s like they’re thinking, ‘Well, most players do it this way, so how can I do it differently?’”

Illinois will likely use a combination of center Maverick Morgan and forwards Michael Finke and Leron Black to lock up Sears down low. Don’t be surprised if shorter players including Malcolm Hill and Alex Austin get a chance on Sears, too.

Mason is the other Bulldog the Illini will need to keep in check Wednesday night. The 6-foot-1 point guard is a high-octane scorer at 16.8 points per game. He also knows how to get his teammates open – he’s delivering 4.6 dimes per matchup, including a season-high eight assists against No. 6 Duke on Nov. 25. Jaylon Tate and Khalid Lewis, currently splitting time at point for the Illini, will each guard Mason.

Groce said Yale’s offense is “very synchronized.” He said the Bulldogs run their half-court sets with great pace, and the players are well-connected – the result of an experienced squad.

The Illini are 2-0 (1949 and 2010) all-time against the Bulldogs. Yale lost to Harvard in a one-game Ivy League playoff last season, halting its chances at an NCAA Tournament bid.