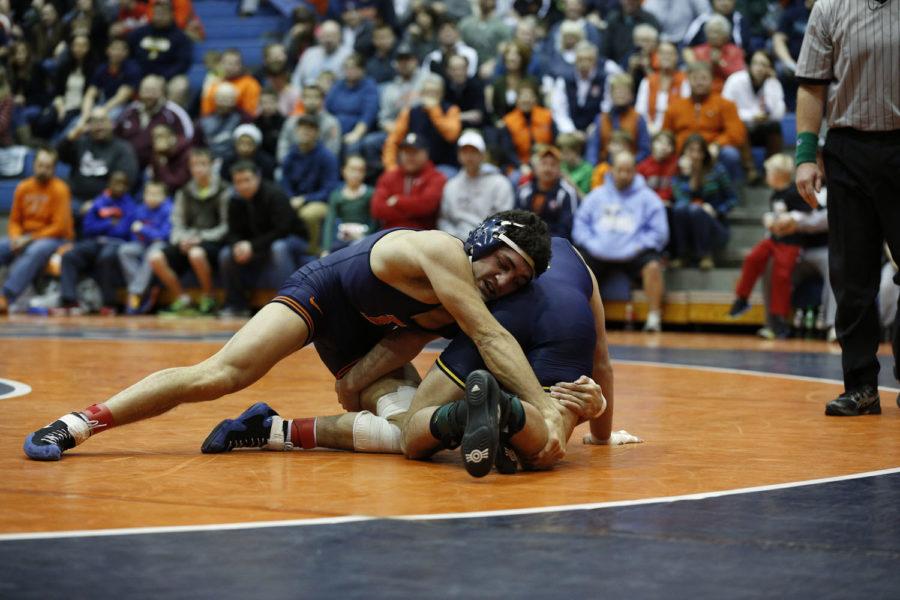 Growing up in Morganfield, Kentucky, Brock and Caleb Ervin were surrounded by wrestling.

The two cousins wrestled for the same high school – Union County – and were coached by Caleb’s father, Robert Ervinbr.

The two have continued their careers with Illinois, where they have faced injuries on their respective paths to victory.

At Union County, Brock was a five-time state champion — his first came when he was an eighth grader competed on the teambr.

To go along with five state championships, Brock earned the Most Outstanding Wrestler award as a senior, going undefeated against opponents from Kentuckybr.

He was a Junior Nationals champion and part of two Kentucky state championship teamsbr.

Wrestling was a big thing in his household, but Brock initially picked it up as a hobby.

“It’s in our blood,” Brock said. “I started at a young age. I wrestled with my cousins and then, in middle school and as an eighth grader, our high school team needed a 103-pounder, so I stepped up and wrestled for our high school.”

From that point forward, his interest in wrestling continued to spark.

As for Caleb, his high school success was mirrored by Brock’s at Union County. Caleb was a part of two team state championships — 2008 and 2011br.

Individually, Caleb placed second in the state in 2008, but was a state champion the following three seasons of his high school career: 2009-2011br.

To add on to his success in 2009, Caleb earned a national championshipbr.

Due to a neck injury, Caleb’s performances on the mat has been limited, but is something he takes day-to-day.

“It’s kind of always been an issue for me,” Caleb said. “Every wrestler has their setbacks and this is mine. It’s always tough to deal with injuries because you have the rest of your life ahead of you. You have to make sure you’re not going to affect yourself in the long run.”

He placed eighth at the Big Ten Championships and won the Harris Openbr.

Caleb’s biggest win came against Dylan Ness, the No. 7-ranked wrestler in the 149-pound weight class, from Minnesota. Caleb defeated Ness by an 11-3 majority decisionbr.

During the 2013-2014 season, Caleb again placed eighth at the Big Ten Championships and won the William Penn Open, but had a .500 record and was sidelined for nearly the entire season, due to injurybr.

“I’ve had a C5 and a C6 fusion that still had problems, where they (the doctors) had to go back in and clear it back out again,” Caleb said. “Currently, I’m still having issues with it.”

Since then, Caleb has not competed for the No. 12-ranked Illini at 149-pounds.

Caleb added that there was no timetable on his return.

The main reason for choosing Illinois was simply because it was close to home.

“It’s a big thing with family,” Brock said of going to a college close to home. “It’s about three and a half hours away and I’ve been coming here for camps since I was real little.”

Caleb was interested in Oklahoma State — a perennial wrestling powerhouse — and Arizona State, but what drew him to Illinois was the coaching staff.

“The biggest factor was the coaches here because they didn’t think of me as a business tool as most people do,” Caleb said. “The main goal for a coach is to assemble the people to win a national championship and they wanted that, but they were more concerned about me on a personal level.”

The Illini are 8-0 on the season and have conference play approaching when they’ll face seven Big Ten teams ranked in the top 25br.

Brock is the team’s 141-pound starter and 6-2 on the season — two of those wins coming in New York Citybr.

Wrestling in the bright lights of New York City is something Brock said he was extremely excited about, but added that he could have wrestled a little better regardless of the 2-1 record he had that day.

“It was exciting, it’s always fun to wrestle in front of a lot of fans, especially in New York City,” Brock said. “I’ve never been to a big city like that, or quite as big.”