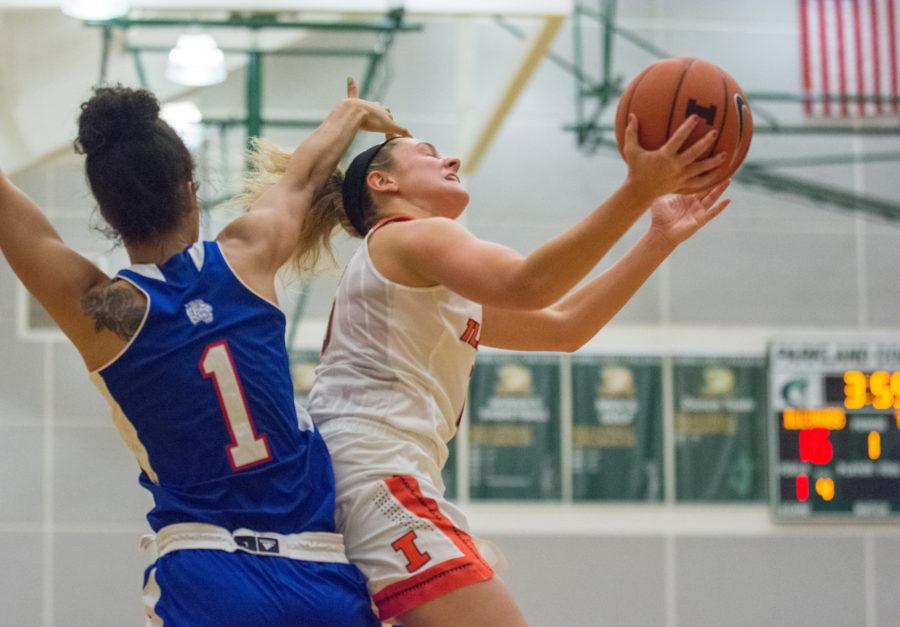 Guard Kyley Simmons puts up a layup during the game against Tennessee State at Parkland College on Tuesday, Nov. 24. Illinois won 98-43.

Senior Kyley Simmons paced the Illini with 21 points on Sunday in the team’s first game back at the renovated State Farm Center.

Head coach Matt Bollant called the 76-67 win over Lehigh a “grinder,” saying that his team just found a way to win.

Bollant dished out the bulk of the credit to Simmons, who’s seven threes tied the State Farm Center record — set by Amber Moore in 2011.

“(Simmons) just kind of refused to let them get back in it,” Bollant said.

The record amount of deep-balls marked a career-high for Simmons, who made at least five 3-pointers in a game for the second time this season.

The Illini needed Simmons’ effort — they were looking to bounce back after suffering their first loss of the season against Miami a few days before the match against Lehigh.

Illinois’ opponent came out firing. Bollant said the Mountain Hawks were the best-shooting team that the Illini have faced this season. Lehigh even tied things up at 31 points apiece shortly after the second half began. It was Simmons’ inspiring play that allowed the Illini to pull away.

“I was talking to (Simmons), and she was shooting the ball so well, and she said ‘Why do you think? Because we know that you believe in us. We know that you think we can be great,’ and that is starting to transfer to all of the players,” Bollant said.

Simmons added to that, saying that Bollant giving her the green light means the world to her in terms of confidence. The sharpshooter also gave credit to her teammate sophomore Chatrice White.

“(White) sets those awesome screens up top for me,” Simmons said. “When you have a big girl that can set those screens and then also be inside and outside for you, it just opens up a lot of room for me.”

White then spoke about how valuable Simmons’ knockdown shooting is for the Illini (5-1). She pointed out that when she or one of her teammates misses on offense, it forces the entire team to be on their heels defensively with little time to set up.

“I love it, it’s great for us,” White said referencing Simmons’ shot making. “When she makes it, it definitely makes it easier on all of us.”

Bollant said that it was impossible not to label Simmons’ play as “clutch.” He noted that whenever the opposition would make a run and close the Illini’s gap, Simmons would step out and make a shot to halt Lehigh’s momentum.

“It seemed like every time we needed a big shot, Kyley had the ball in her hands and was willing to knock it down,” Bollant said.

Bollant, like Simmons, also gave credit to Chatrice White for setting screens to get Simmons open. Simmons’ unmatched confidence is what Bollant feels allowed her to capitalize on opportunities.