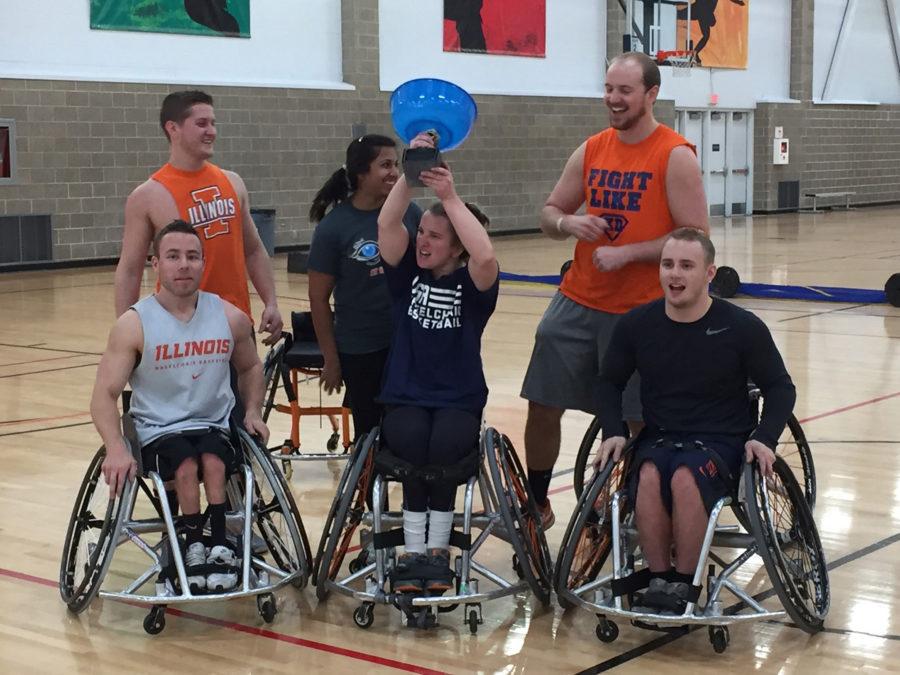 After a long first half of the season, the Illinois wheelchair basketball teams were able to have a little bit of fun heading into winter break.

Wednesday morning, the Illini held their 11th annual “Popcorn Bowl,” a gift exchange and touch football tournament that takes place every year before the breakbr.

The initial Popcorn Bowl idea came in 2004, when the coaches and players thought that they should celebrate the bowl season before break.

“It’s our fun way to kick off the football bowl season and celebrate the first half,” Assistant Coach Kate Rougeaubr said. “We do our gift exchange, play the game, and it gets pretty intense. The coveted popcorn is one of the big goals, especially for all of the seniors. It’s similar to the Stanley Cup, names written on it, years that they won. It’s awesome.”

After the gift exchange, the players from both the men’s and women’s teams — along with some of their friends that are not on the team — break up into four smaller teams and play two-hand touch football.

Though it is supposed to be a friendly game, the players did not take it easy on each other.

At times two-hand touch became tackle, and there were even people running into the walls.

“There’s a big group of us that are seniors, so it would be awesome to come out with a win,” senior Olivia Morrisonbr said before the game. “The Popcorn Bowl always gets really heated and competitive because its just fun to support our home teams in football. It’s just really fun to compete against each other in a different sport.”

In the end, the “Philly Fanatics,” came out on top. They won on a touchdown by senior men’s player Ryan Neiswenderbr with five seconds remaining to go up 28-22.

Some notable performances came from Shelby Grussbr, who had a huge catch over Kendra Zemanbr, and Gail Gaengbr, who participated in her first Popcorn Bowl ever this year in her senior season.