Illini basketball pushes past Yale to climb back to .500 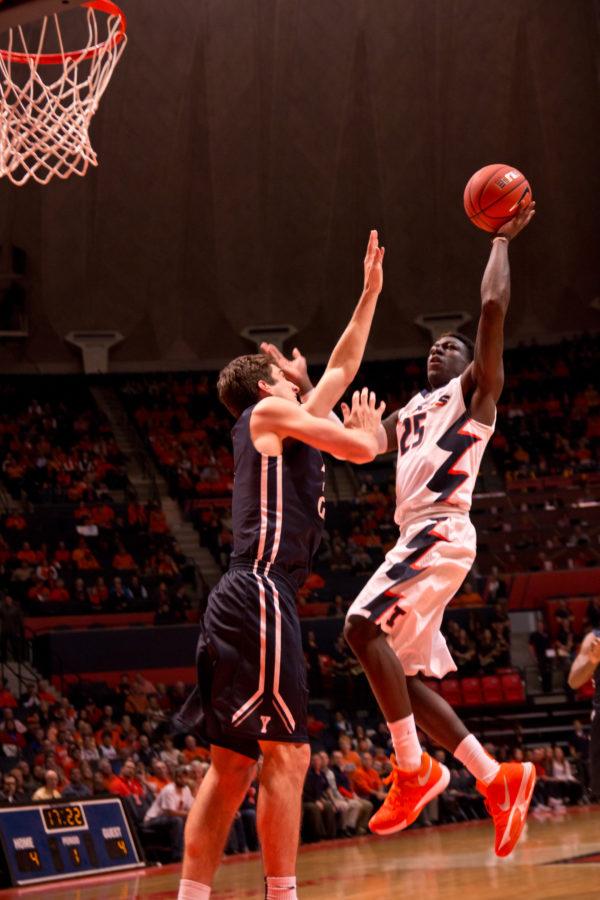 Malcolm Hill pushed the ball and settled on the left wing. The 6-foot-6 swingman went through the legs to a crossover — a move patented by Tim Hardaway in the NBA during the 1990s — and then he was off to the races. A Maverick Morgan screen opened the floodgates for Hill, who only needed one more dribble before taking flight from a foot outside the restricted area and flushing it home over Yale’s Jack Montague.

Hill (20 points, seven assists, five rebounds) was in attack mode early and often in Illinois’ 69-65 win over Yale on Wednesday night. Meanwhile, shooting guard Kendrick Nunn (9-of-16 shooting, 28 points) continued his hot hand in his fifth game back in the lineup. He drilled 6-of-8 3-pointers to increase his season-average from beyond the arc to 49 percent.

“What I’ve seen out of Kendrick in these games is what I’ve seen over my years with him here,” Hill said. “All the hard work he puts in … it doesn’t surprise me at all. I’m happy for him. When we were freshmen, we talked about sticking with it, and to see the hard work pay off, I’m proud of him.”

Yale (5-4) hung with Illinois (5-5) for much of the first half until Hill and Morgan scored a combined 10 points during a three-minute span. The Illini entered the halftime locker room with a 33-25 lead thanks to their fast-paced play, forcing Bulldog turnovers and scoring points in transition. Yale coughed up the ball 15 times in the first period, and reigning Player of the Year Justin Sears was benched for picking up two early fouls.

Illinois continued its trend of allowing teams to creep back in the final 20 minutes of games. Yale went on a 12-2 run to begin the second half. Because their shots started to fall, the Bulldogs had more time to run back and position themselves in their defensive sets.

Yale would never regain its lead, but it would relapse its turnover issue. With the game on the line, the Bulldogs turned it over in three of their last four possessions.

“I was proud of the fact that we got punched in the mouth in the second half, and our guys really responded,” Groce said. “They just buckled down and made the plays we needed to make.”

Then chaos ensued as the Illini led 67-62 with fewer than 10 seconds to play. Yale had the ball, and suddenly there was a mad scramble for the rock as players converged on the floor of the lane. Somehow, Victor emerged from the dogpile and, still on the ground, flipped a pass to Mason for a 3-pointer to cut it to 67-65.

Mason’s shot gave Yale a glimmer of hope, but Nunn was cool and collected on the free throw line, sinking two from the charity stripe to extend Illinois’ lead to four and essentially end the game with 1.6 seconds left.

The Illini fought their way back to a .500 season record despite being out-rebounded 48-25. Seventeen of Yale’s boards came on the offensive end. Illinois made up for the deficit on the glass by taking care of the ball – Groce’s team finished with just five turnovers.

“I don’t know how many times I’ve won a game, as a coach, where we were out-rebounded (by that number),” Groce said.