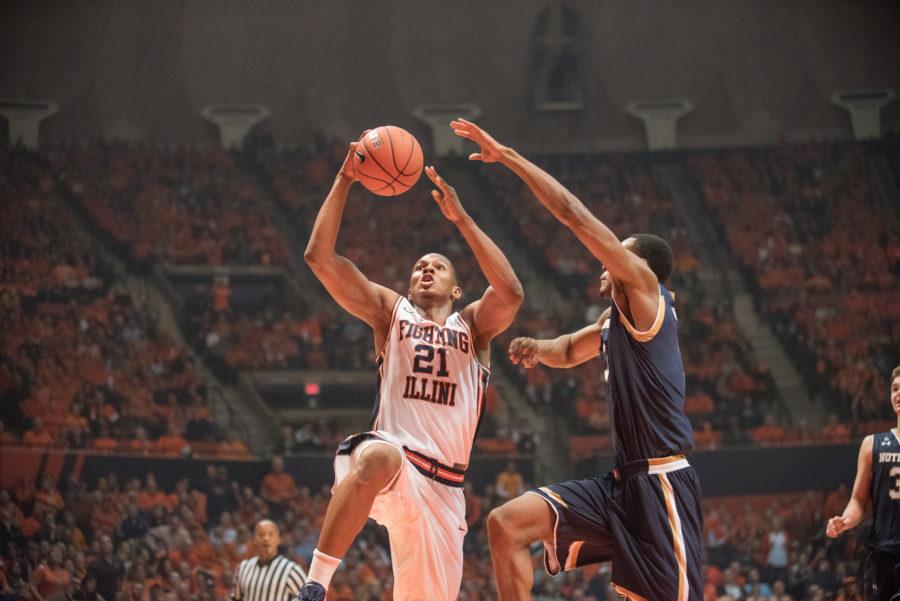 Guard Malcolm Hill drives to the basket during the game against Notre Dame at State Farm Center on Wednesday, Dec. 2. Illinois lost 84-79.

Over the last five years, Illinois basketball’s annual United Center game has evolved into an experience comparable to getting a root canal or waiting in line at the DMV.

It isn’t pleasant. It isn’t fun.

In its last six regular season games at United Center, Illinois has: lost to UIC, lost (badly) to UNLV, edged bad Auburn and UIC teams, lost to Oregon and barely escaped UIC again. The Illini held off a double-digit Flames’ comeback Saturday for a 83-79 win, crawling above the .500 mark for the first time this season at 6-5.

John Groce’s squad needed 21 points from Malcolm Hill and double-digit scoring efforts from Kendrick Nunn, Michael Finke (14 points apiece) and freshman Jalen Coleman-Lands (15) to scrape by its sister school at a United Center venue that was probably filled to one-fifth of its capacity.

As we’ve seen in its last four games, Illinois has serious problems coming out of halftime with a lead. In each of their last four against Notre Dame, Western Carolina, Yale and UIC, the Illini have led by at least 10 points early in the second half, only to quickly blow their double-digit margins and let their opponents back in the game. On Saturday, UIC used a 16-1 run to take a 60-55 lead with 9:21 remaining.

Dikembe Dixson scored 17 of his 20 points in the second half to spark the comeback.

At this point, it’s clear these second-half struggles are not a fluke. It’s a critical flaw in Groce’s team that will be mercilessly exposed in Big Ten play if it isn’t corrected soon. In the Springfield games in November, it was the beginnings of games that the Illini couldn’t figure out. Now they can barely finish them.

It’s hard to overstate how badly injuries have hampered the Illini. With Leron Black and Mike Thorne Jr. sidelined, Illinois’ frontcourt is mostly wiped out. Michael Finke and Maverick Morgan have filled in admirably, but rebounding and interior defense have taken a major hit.

Still, Groce has some talented pieces to work with. Hill, Nunn, Coleman-Lands and Finke have all shown shown elite scoring capability, and Hill and Nunn bring it consistently. The cupboard is not bare.

Even though they both registered as wins, it’s impossible to excuse Illinois’ performances against two far inferior basketball schools in Chicago State and UIC. The Illini beat these historically bad programs by a combined seven points, which is nothing short of embarrassing and unacceptable for an athletic program that claims to own the state.

I really like Groce as a person and truly believe he’s endured some of the worst possible fortune during his three-plus years as head coach, but performances like Saturday’s should be evaluated independent of the injuries. The Illini have enough healthy talent on their roster to blow UIC off the floor.

The atmosphere at United Center was on life support, and I’m not sure if all of the announced crowd of 5,151 even showed up. It’s going to take some serious work to win Chicago back.

The most optimistic takeaway from Saturday for the Illini is that this team has shown they’re capable of playing up to talented competition. They played No. 4 Iowa State close for 32 minutes, probably should have beaten Notre Dame if not for a brutal second-half collapse and were a missed dunk away from beating a Top 25 Providence team on the road.

But understandably for Illini fans, playing down to the competition is getting old.