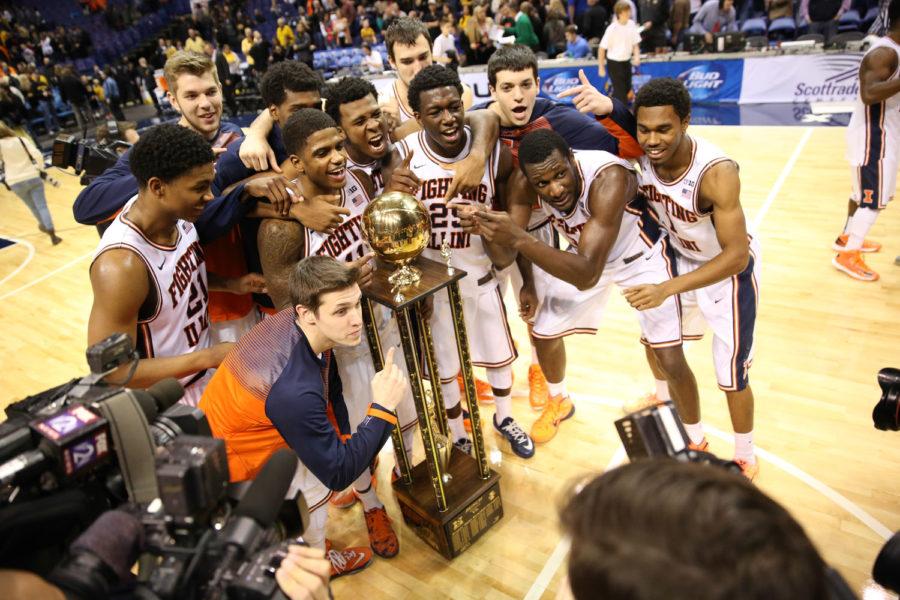 Tweet: Even in a down year for both teams, Braggin’ Rights remain sacred for Illini/Mizzou

When a season goes as it has so far for Illinois basketball, it can become harder to find games on the schedule with true importance and meaning.

At 7-5, the Illini have suffered from some self-inflicted pain this season and a good deal more from forces beyond their control. In John Groce’s fourth year as head coach, Illinois basketball fans have seen things they never thought they’d witness when they were riding high in the three decades before this one.

Illinois losing to mid-majors in a mid-sized convention center in Springfield. A nearly-empty United Center crowd watching the Illini and UIC battle it out in the final minutes. Starting lineups featuring walk-ons due to an unprecedented spate of freak injuries.

At this point, it’s pretty clear that much of the casual fan base has checked out, occasionally peeking its collective eyes back in the direction of Illini hoops when convenient. With the team’s injury situation still so uncertain, it’s unclear if Groce and his guys are capable of building that buzz around the program back up this season, or if fans should even entertain the notion of a possible NCAA bid.

But Wednesday’s Braggin’ Rights game against Missouri is different. It’s not just another chance for the Illini to try and dig themselves out of an early-season hole or bury themselves even further. Braggin’ Rights — even for two programs at one of their lowest shared points in the history of the series — remain sacred for thousands of fans on both sides of the rivalry.

Much like how the season has unfolded to this point for Illinois, the 2015 edition of the Braggin’ Rights game won’t have as much of the familiar buildup and anticipation.

At 5-5 coming off a rough rebuilding season, Mizzou basketball isn’t where it once was, either. Wednesday night’s game will be just the ninth time since 1980 that neither team is ranked in the Top 25. And even though playing the game mid-week is nothing new, the fact that this year’s matchup takes place at 6 p.m. on Wednesday won’t do the attendance or atmosphere any favors.

But still, this series has too much history and too many highlights for the aura surrounding Braggin’ Rights to completely disappear Wednesday night. Remember, the fan bases still generally despise each other. And if you’re an Illini fan in Missouri or in the Metro-East area in Illinois, this is probably your Super Bowl. Not only are the loser’s holidays a little less happy, but the right to gloat to family, co-workers and friends who have been corrupted by the other school is forfeited for an entire year.

It’s fitting that the fate of Wednesday night’s game will probably be determined by how well a St. Louis-area native — Illinois junior Malcolm Hill — plays at Scottrade Center, just 15 miles from his hometown. Hill is coming off the best game of his career, a 34-point, 11-rebound outburst against South Dakota Saturday, and is rounding into one of the Big Ten’s most complete and efficient players.

He was named a co-Big Ten player of the Week for his performance against the Coyotes, and his stat line marked the first time in 25 years that an Illini posted a 30-point, 10-rebound, five-assist game

Hill is leading his team in scoring (18.5 points per game), rebounding (if you don’t count injured Mike Thorne Jr., at 5.8 per game) and assists (four per game). Kendrick Nunn isn’t far behind in the scoring column, putting up 18.4 per contest. Look for Mizzou to try and lock down those two, potentially opening up opportunities for freshmen Jalen Coleman-Lands and Michael Finke.

The Tigers’ best player transferred after last season, and two of their freshmen now carry a large portion of the offensive load. Terrence Phillips — who has a hilarious name if you’re a South Park fan — runs the show at point, and 6-foot-7 forward Kevin Puryear leads Mizzou in scoring at 12.4 points per game.

Both teams are looking for their first signature win of the season, and neither will find it Wednesday night. It remains to be seen how many “big games” the Illini will participate in this season.

But no matter the circumstances, Braggin’ Rights will always be “big.” Wednesday is no exception.