Nunn, Hill light it up for Illini in upset of Boilers 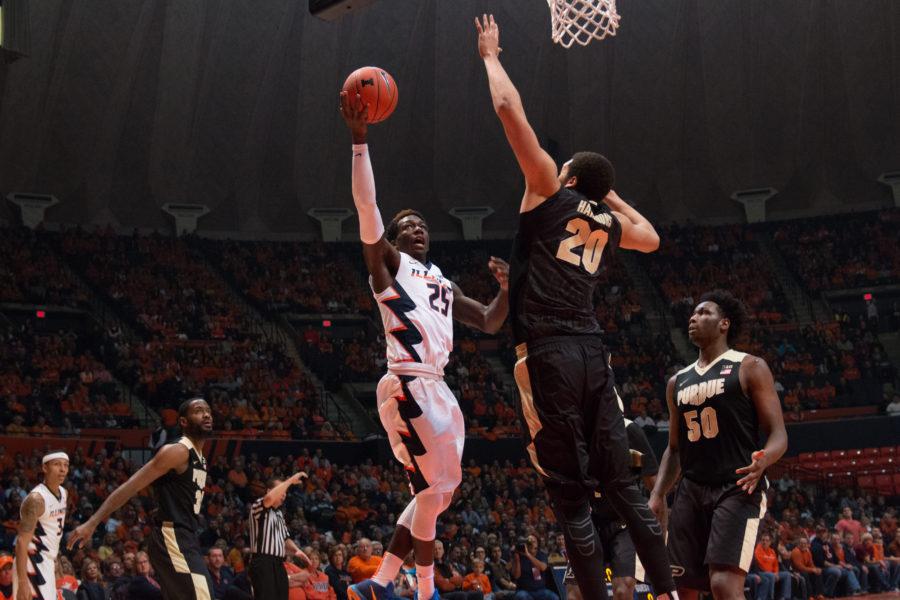 Illinois’ Kendrick Nunn puts up a layup over Purdue’s A.J. Hammond during the Illini’s 84-70 victory over the Boilermakers at State Farm Center on Sunday. Nunn dropped 22 points in his first game back since missing time to attend the birth of his first child.

Nearly two full months into the season and fresh off the worst loss in the John Groce era, a struggling Illinois team needed a signature win.

It got one Sunday against No. 20 Purdue at State Farm Center.

The Illini junior opened the second half with eight straight points and Illinois never looked back, knocking off the Boilers 84-70 for the program’s first win over a ranked team since the Illini beat No. 11 Maryland on Jan. 7 of last year.

“That probably ended up being the difference in the game, the start of that second half,” Purdue head coach Matt Painter said. Nunn’s outburst included a three, a fast-break layup and four-point play, and he wasn’t done.

With 12 minutes left, Nunn saved a broken possession when he slashed into the lane, received a pass from teammate Jalen Coleman-Lands and finished with a thunderous slam in the face of Purdue’s Caleb Swanigan. The jam electrified the Illinois crowd of 12,246 and drained the life from the reeling Boilermakers.

Nunn capped off his performance with a steal and a dagger three to give the Illini a 71-56 lead with 4:26 to play.

Nunn finished with 22 points in his first game since the birth of his son, which caused him to miss Thursday’s 25-point beatdown at Michigan State. But he returned with a vengeance Sunday.

“It’s been a long week for me, I probably haven’t got much sleep,” Nunn said after the game. “But I’m tough, and when I get on the floor, I do what I have to do.”

While Nunn ignited the Illini surge, Malcolm Hill was the steadying force all evening. He scored 30 points on 9-of-15 shooting and buried 10 of 14 free throws to help seal the game down the stretch. It was Hill’s second 30-point outing on the season and a refreshing bounce-back game after being limited to 10 points against the Spartans.

As they’ve shown all season, when both Nunn and Hill are lighting it up, the Illini can hang with nearly anyone.

I wrote before Sunday’s game that Illinois head coach John Groce would need to get creative defensively to counter Purdue’s post advantage, which features a pair of skilled seven-footers in AJ Hammons and Isaac Haas, as well as five-star freshman Caleb Swanigan. Even if I knew Groce’s game plan was destined to succeed Sunday — and it did — I doubt anyone expected it would work so well.

Groce mixed his defenses, alternating between a zone and man-to-man to keep the Boilermakers off balance. While in man, guys like Hill, Michael Finke and Aaron Jordan fronted the post and relied on weak-side help to have their backs in case Purdue lobbed entry passes over the top. It was easy to tell that Groce had drilled defensive rotations into his players’ heads in practice, and the strategy worked beautifully.

Junior center Maverick Morgan probably had the most impressive day defensively. Tasked with holding down Hammons and Haas, Morgan came off the bench  and held his ground, helping limit the pair to a combined 18 points.

Swanigan finished with 12 points, but the fact that the Boilers’ trio of big men came nowhere close to dominating was key.

Simply put, Illinois beat Purdue at its own game Sunday. The Boilermakers have long been known for known for bruising basketball, grinding opponents into submission with suffocating defense and hustle. But the Illini had active hands all night, playing the passing lanes and refusing to let Purdue develop any offensive rhythm.

At 9-8, this win won’t mean much in the grand scheme of things if the Illini don’t string together some more victories as the Big Ten schedule softens in the coming weeks. No one — players, coaches or fans —should be thinking NCAA tournament or even NIT yet.

But even in the context of a turbulent, injury-riddled season, this win has to feel good for everybody involved with Illinois basketball. The Illini not only showed they could play with a superior team, they proved they could prepare, execute and beat them handily.

The Illini can feel good for a couple days here, and they have a really good win to build on as they look to salvage the season. Groce stressed after Sunday’s game that no one is satisfied.

“I’m not interested in doing that just one day, or just a couple practices,” Groce said after the game. “We have to do that every day. That’s the standard, and that’s the expectation moving forward.”