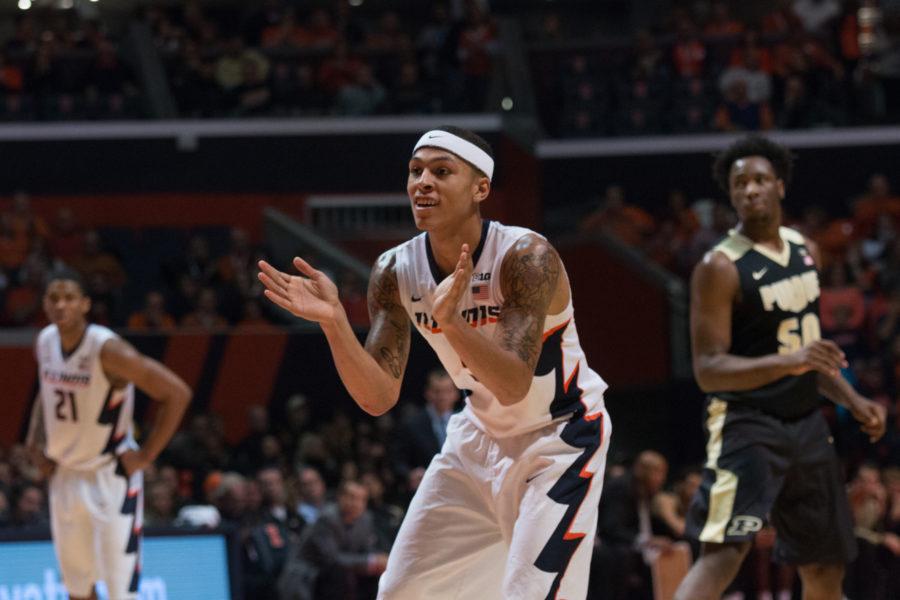 Illinois’ Khalid Lewis claps during the Illini’s 84-70 victory over Purdue at State Farm Center on Sunday.

No two basketball seasons are the same.

This is especially true during the John Groce era at Illinois, where a revolving door of transfers, freak injuries and inconsistent play have turned the program into somewhat of an enigma. But even though Groce’s current Illini team is completely different than the one he fielded in 2014-15, it’s easy to see the similarities between what happened almost exactly one calendar year ago and what’s at stake this weekend when Illinois takes on Nebraska.

The Illini picked up their first win against a ranked opponent in over a year Sunday when they surprisingly manhandled No. 20 Purdue. Before Sunday, the last time the program defeated a ranked team was Jan. 7 of 2015, when the Illini upset No. 11 Maryland in similarly unexpected fashion in their first game without an injured Rayvonte Rice. It was an uplifting win for a team that seemed doomed without its star player, and one that was capable of sparking a long run of Big Ten victories.

Illinois followed its signature win over Maryland with an absolute clunker, losing 53-43 at Nebraska four days later. The up-and-down theme continued for much of the remaining Big Ten slate last season on the way to a 9-9 conference record. With the Huskers set to visit State Farm Center Saturday, this year’s version of the Illini can’t let history repeat itself.

Illinois has to feel good about its schedule the rest of the way, with only two truly intimidating road opponents in Maryland and Indiana dotting an otherwise favorable schedule. There’s a 6-2 or 5-3 run to be seized in the next month if the Illini can play consistently at a level approaching what they did against the Boilermakers.

If the Illini are serious about answering an 0-3 Big Ten start and a painful nonconference slate with a nice turnaround in the season’s second half, they have to prove that their big win over Purdue was more than just a fleeting glimpse of what this team is capable of. They have to build on that refreshing performance and dispose of Nebraska Saturday.

At 10-8 and 2-3 in Big Ten play, the Huskers aren’t a remarkable team at this stage of the season. They took a couple good teams in Miami and Cincinnati to the wire in nonconference and are entering Saturday’s matchup after two straight blowout wins over Rutgers and Minnesota, who are dreadful. There’s not much Nebraska does on either side of the ball particularly well or poorly, although it is a team prone to turnovers and one that will rebound at a decent rate on both ends.

The Huskers are similar to Illinois in that they heavily rely on two players — Andrew White and Shavon Shields — for the bulk of their scoring and rebounding. Last season’s leading scorer Terran Petteway left for the NBA draft, but White is a Kansas transfer who has slid into the scoring guard role and filled it well, averaging 17.3 points per game on 52 percent shooting. The Illini should be familiar with Shields by now, a versatile slasher who is putting up over 15 points per game as a senior.

So while Illinois and Nebraska stack up competitively on paper, Saturday is a chance for the Illini to show they’re a class above the Huskers. Even with injuries, the Illini can reasonably aspire to finish near the top half of the Big Ten standings and be a team that is capable of making some noise down the stretch.

A win Saturday is another step toward that goal. A loss would be another frustrating setback in a season of many.