No. 13 Illinois wrestling look to bounce back in conference play at Michigan 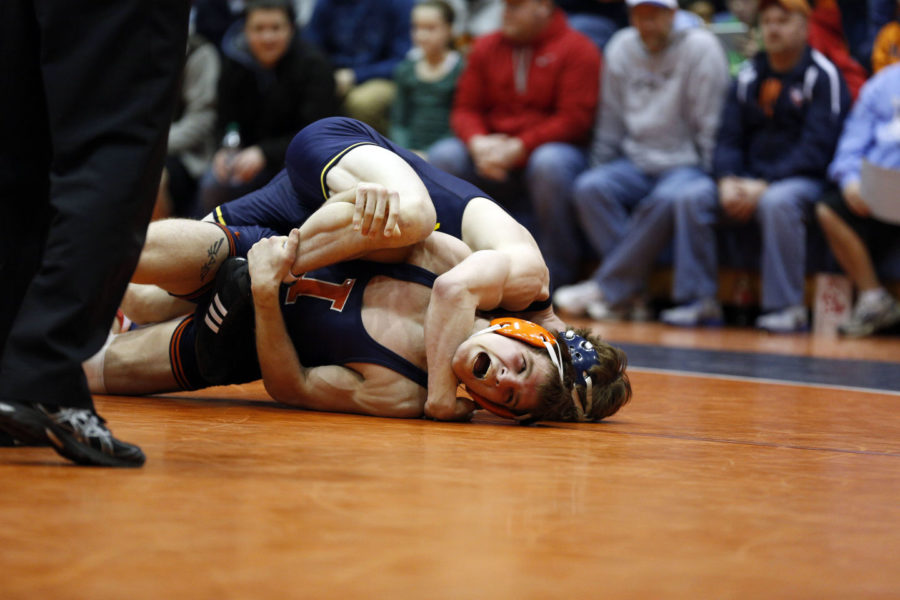 Illinois’ Zac Brunson wrestles Michigan’s Brian Murphy at Huff Hall on Jan. 18, 2014, the last time the Wolverines and the Illini met on the mat. Brunson, now a senior, will not wrestle against Michigan on Friday night in Ann Arbor, and several freshmen have been called upon to take his place.

After dropping the first two duals of its Big Ten season, the No. 13 Illinois wrestling team heads to Ann Arbor, Michigan, for a top-15 dual against No. 10 Michigan.

The Illini will also face Michigan State on Sunday in East Lansing, Michigan.

Illinois began the Big Ten slate with two tough opponents – No. 11 Ohio State and No. 2 Iowa – but bounced back for a 27-14 win over Northern Illinois on Sunday.

Sunday’s dual proved to be a good day for redshirt freshman Brock Ervin, as he upset then No. 15-ranked Steve Bleise of Northern Illinois, 14-12, in a 141-pound bout.

“Going into the match, I knew he was a good wrestler,” Ervin said. “Just getting ready for it, I just basically just got my head on straight, confidence level was high, we went over my mistakes in the match against Iowa and what I did wrong and I just corrected those mistakes in the following practices and went up there and just competed.”

Ervin will likely face redshirt sophomore George Fisher on Friday at 141-pounds. This season, Fisher is 6-5 with a 3-2 dual match record and is coming off of a 19-4 loss to No. 6 Micah Jordan of Ohio State.

As a team, the Wolverines are 2-0 in conference competition with their latest victory coming last Saturday against then-No. 6 Ohio State.

Redshirt sophomore Kyle Langenderfer said that the Friday-Sunday matches are tough because of the different style that both teams bring to the table.

“Its different schemes and stuff, it is a little tough at times to get up for two, but now that we’re in full Big Ten swing, it’ll be pretty easy just because they’re all tough opponents,” Langenderfer said. “It’ll be a little easier to get up, especially with Penn State coming in next Saturday, it’ll be fun.”

At 149-pounds, Langenderfer is coming off a tough two-point loss to Gabe Morse of Northern Illinois on Sunday and things don’t get any easier on Friday, because Michigan’s Alex Pantaleo is ranked sixth in the class.

“I go into every match with a positive mindset, I have to go in and fight and just do my best,” Reinemann said.

Originally at 141-pounds, Reinemann has had to gain nearly 30 pounds to be eligible for the set weight class, which he said has been tough to wrestle at.

Friday, though, the Illini will wrestle another redshirt freshman, Emery Parker, who has likewise had to gain weight to stay eligible for the select weight class.

Parker came into the season as a 165-pound wrestler, but has wrestled most of the season at 184-pounds. With Brunson still injured, though, and Reinemann struggling, Parker had to drop his weight down to 174-pounds to wrestle against Michigan at that class.

Parker will take on the Wolverines’ Davonte Mahomes, who is ranked No. 16 in the class.

Friday’s meeting between the Wolverines and the Illini will be the first since the 2013-2014 season, where the Wolverines came out of Huff Hall with a 19-13 victory.