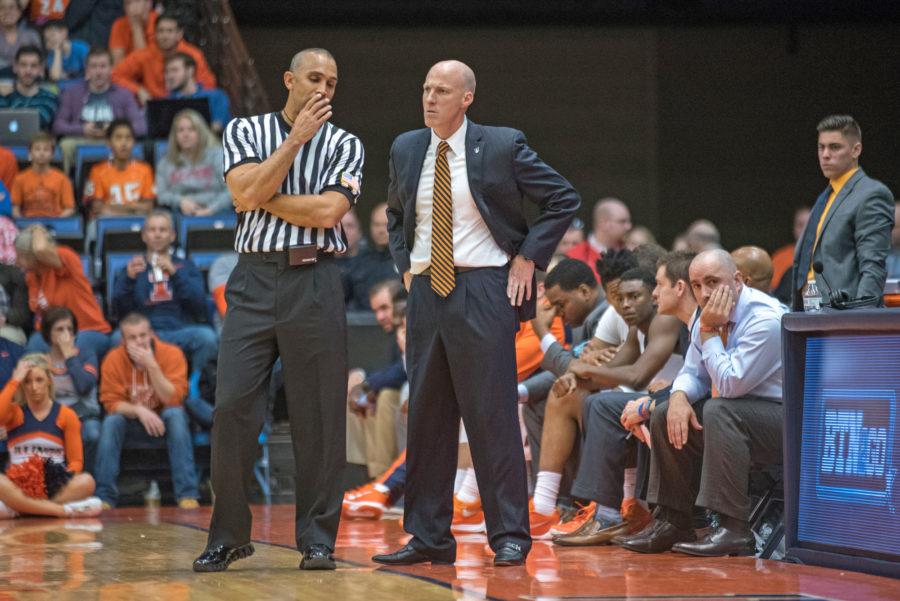 Head coach John Groce speaks with a referee during the game against North Florida at the Prairie Capitol Convention Center on Friday, Nov. 13. Illinois lost 93-81.

Javon Pickett, a 6-foot-4 shooting guard in the Class of 2017, has committed to Illinois.

Scott Burgess of Prephoopsillinois.com was the first to report Pickett’s pledge.

Pickett is rated as a 3-star prospect by 247sports.com, and is somewhat of a late-riser as a junior in high school. He didn’t have any Division I offers at the start of his sophomore season, but has developed into a tremendous scorer and rebounder at the high school level. He’s currently averaging 24 points and nine rebounds per game for Belleville East.

Scouts have lauded Pickett’s athleticism and ability to fill it up as a volume scorer. Considering his length on the perimeter at 6-foot-4, it’s possible his ceiling as a player is higher than his current 3-star ranking.

The Class of 2017 is crucial for Groce and the future of the Illini basketball program, and Pickett holds a couple of key connections to Groce’s other targets. He’s from the same Metro-East St. Louis-area as 4-star prospect Jordan Goodwin and 5-star big man Jeremiah Tilmon. Pickett told Derek Piper of IlliniInquirer.com Saturday that he would do his best to get those two to follow him to Illinois.

With an extremely loaded collection of in-state and regional talent, the 2017 class has the potential to be program-changing for the Illini if Groce can add the right pieces. Landing a talented wing like Pickett is a good first step.