University of Illinois athletics manages to stay afloat while others sink 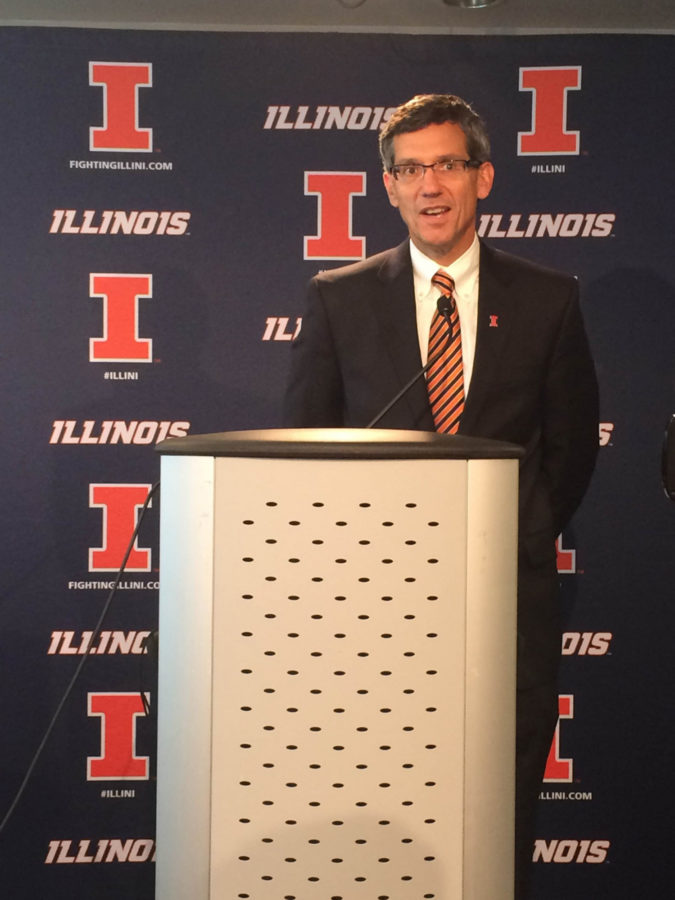 Peter Bailey Wells | The Daily I

In a growing “arms race” in college athletics where many athletic departments around the nation are in the red with continuous growing deficits, the University of Illinois barely managed to stay over the line during the 2015 fiscal year.

The University’s Department of Intercollegiate Athletics earned $74,469,976 in revenue during the 2015 fiscal year, resulting for the second-straight year in a $0 net profit.

Illinois’ finish to the year broke a trend of the DIA’s ability to bring in a profit while other schools struggle with increasing deficits. Interim Athletic Director Paul Kowalczyk recognizes that rising costs may force Illinois to join other schools that battle deficits, but is still proud of the department’s achievements.

“I think we’re in a good spot,” Kowalczyk said. “There will be challenges. … We’re not having success on the playing field that we would like, we’re not meeting all the revenue projections we’d like to meet, especially with ticket sales in football and basketball. We’re in a good spot right now, but there are always concerns around the corner.”

However, the athletic department has managed to remain profitable during at least the past five years. The department has stayed on budget while deficits grow in other schools’ departments.

Illinois’ ability to wade the financial water is something that’s become a rarity in college sports, according to B. David Ridpath, an associate professor and Kahandas Nandola professor of sports administration at Ohio University. Ridpath has more than 20 years of experience in sports administration as a professor and former college athlete — he taught Illinois Senior Associate Director of Athletics for External Operations Mike Waddell at Ohio.

According to the Ridpath, universities become caught up in the competition against other schools to provide the best facilities and sometimes don’t know when to draw the line, ultimately resulting in great deficits.

“In general, most athletic departments do run a deficit,” Ridpath said. “In athletics, we do a great job of generating revenue, but we do an equally bad job in managing our spending because we’re trying to be better than the next guy.

A Washington Post article published in 2015 showed that at least 30 universities in the FBS had deficits in 2014. The report stated six teams in the Big Ten ended the fiscal year in the red.

A majority of departments have dealt with large deficits and the inability to stop spending. University presidents and board of trustee members become worried of losing to other schools because of “outdated” facilities when competing schools improve theirs. Leaders are also focused on success and have shorter leashes with athletic directors and head coaches — early firings lead schools to pay for two coaches of the same sport at the same time, according to Ridpath.

All of these examples of excess spending are what led to Ridpath’s thoughts on needless spending. He admits there are facilities that need upgrades but draws the line when schools fill facilities with things that were once unimaginable, such as Clemson University, which is building a $55 million complex that will have a miniature golf course, laser tag, movie theater and other things that can only be used by football players.

Statistics show bumps in applications when a school’s football and men’s basketball team competes in national championships and Final Fours, but Ridpath noted that schools wouldn’t be lost without their athletic departments.

“If I waved the magic wand and eliminated athletics at the University of Illinois, the University would continue to survive, it would likely thrive because it’s a great academic institution,” Ridpath said. “The University is the most important thing here. We just want to watch the games.”

Last year’s break even ended years of profit for the department since at least 2011. Through a Freedom of Information Act request, The Daily Illini obtained the University’s annual Equity in Athletics Disclosure Act since 2011, which it is required to submit each year. The EADA is given to the NCAA to report spending, revenues and other financial-related topics per sport.

Football led all sports in revenue in 2015, earning $30,819,616 while men’s basketball finished second with $17,823,570. Volleyball finished fourth and led women’s sports with $809,830 and men’s golf and baseball rounded out the top five, finishing third and fifth, respectively.

The burden of football and men’s basketball carrying the load, revenue-wise, is not an uncommon national trend. Although women’s basketball has seen great progress during the past few decades and programs like Tennessee have seen greater support than the men’s team, many programs still struggle to gain any profit, according to Ridpath.

With the ticket revenue, television deals and other financial deals associated with football and men’s basketball, it’s not unexpected to see the two carry programs across the nation.

“It’s still tough,” Ridpath said. “Overall, sadly, women’s basketball programs do lose a lot of money and so do other programs and those bills need to be paid.”

Senior Associate Director of Athletics Susan Young is responsible for the annual reports. She said it’s a priority for her to be responsible with the budget the department put in place. Surplus money is saved for the next year or used to cover costs elsewhere, such as bonds to quickly payoff the State Farm Center renovations.

Illinois has covered the deficits while also increasing the amount it has spent on student aid and recruiting. In 2015, the department offered $6,682,901 to male athletes while $4,514,751 was offered to women athletes. Student aid for athletes has continually risen since 2011, when the University offered a total $9,847,571.

Despite the large expenses, the department evened the total with the $53,679,677 that was earned from sports revenues and $20,790,299 that was not allocated to a particular sport.

Young mentioned that it’s important to remember that the department is a not-for-profit and its responsibility is to serve the student-athletes’ best interests.

“We’re really here to create an experience for students that may or may not have had an opportunity,” Young said. “I think the student piece is as important as the sport-by-sport revenue and expense.”

Looking toward the future

While Illinois has stayed above the red during 2015, it will need to find a way to continue the trend. The University will likely name an athletic director in the coming days who needs to find a way to energize fans, especially donors, during years when the school’s revenue sports will experience down years.

Expenses will also continue to increase. The department has faced higher prices in travel, NCAA deregulations, higher cost in attendance and the new NCAA food regulations for student-athletes. The addition of Nebraska, Maryland and Rutgers to the Big Ten conference has also increased the costs through travel. Although 2014 was a high year in the annual fund donation, ticket sales are dropping with the poor play by both men’s basketball and football, forcing Illinois’ department to be weary of the future.

“You want to achieve as much as you can and have as much success as you can,” Kowalczyk said. “We’re not where we want to be, but we’ve done a good job of managing the money that we have.”

The new head of the department will have those issues to deal with while also trying to avoid joining a national trend that has hurt many schools. They, like many administrators, coaches, donors and fans, will need to reflect on the state of college sports and the direction athletic spending is heading toward.

“I think we’ve really lost our way,” Ridpath said. “We can really work on the deficit like women’s basketball, baseball and others will never turn a great profit, but we can manage more for our athletes and make their experience a lot better academically if we wouldn’t spend on things that are needless.”