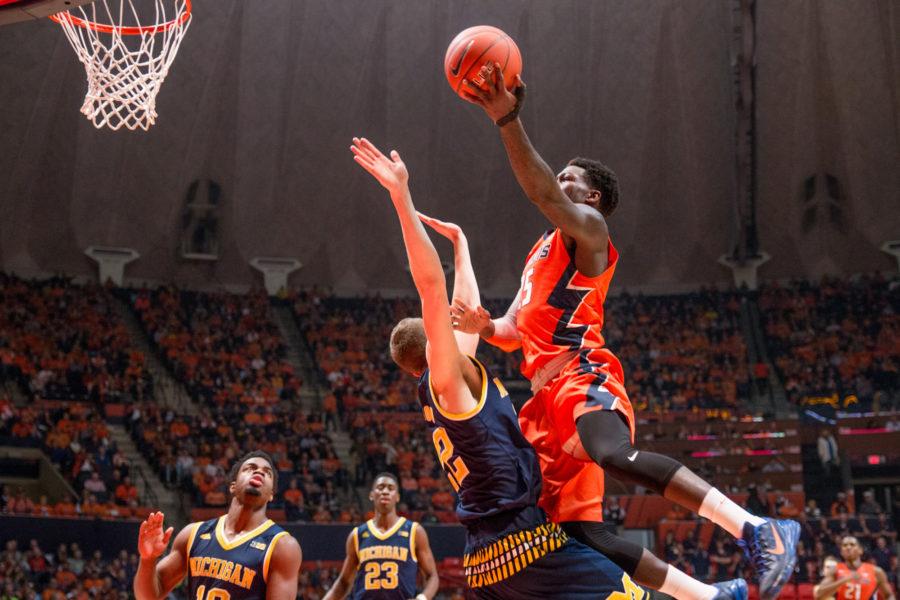 Illinois’ Kendrick Nunn takes a layup over a Michigan defender during the game against Michigan at the State Farm Center on Wednesday, December 30, 2015. The Illini lost 78-68.

Jalen Coleman-Lands took one baseline dribble before two Purdue defenders halted his path to the basket. With his back turned to the hoop, the freshman guard delivered a perfectly timed bounce pass to a cutting Kendrick Nunn, who collected the rock and took flight from well outside the restricted area.

Nunn’s upward flight trajectory culminated in a poster dunk on Purdue’s 6-foot-9 star freshman, Caleb Swanigan. All hell broke loose in State Farm Center, and the Illini took a 57-48 lead over the No. 20 Boilermakers with 11:45 remaining in their Jan. 10 matchup.

Illinois (9-10) went on to beat Purdue, and Nunn finished with 22 points on 8-of-12 shooting to go with five rebounds. It was another special performance in the shooting guard’s stellar junior season, in which he’s averaging 18.5 points and 5.4 rebounds per game, while shooting 48 percent from the floor and 41 percent from 3-point range.

But the Purdue game – which marked Illinois’ first win versus a ranked opponent since a 64-57 win over Maryland in early 2015 – was far from the biggest news in Nunn’s life that week.

Nunn’s son, Kason Lee, was born three days earlier on Jan. 7, right around the time the Illini tipped off against Michigan State. Nunn missed the game to be with his new family.

“It’s been a long week for me – just staying up. I probably haven’t gotten as much sleep for the past week, but I’m tough. When I get on the floor, I do what I have to do,” Nunn said after beating Purdue. “I’m proud of my son’s birth and glad we came out today and got the win.”

Illinois came back to Earth in a 78-67 loss to Nebraska on Jan. 16. Following Tuesday’s loss to Indiana, the Illini now sit third-to-last in Big Ten play with a conference record of 1-5.

But Nunn’s partner-in-crime, Malcolm Hill, isn’t concerned with the slow start or any outsiders’ perspectives.

“To be honest, I don’t really pay attention to what people can say – whether that’s people giving up on us or anything,” Hill said. “The people that are gonna be with us … we just know that our inner circle is going to give us full support no matter what happens. We can’t control what happened in the past, but we can control what happens in the future.”

Hill is putting up nearly identical numbers to Nunn. Through 19 games — and 19 starts — the do-it-all swingman is averaging 18.2 points, 5.6 rebounds and a team-high 3.5 assists per game. Nunn and Hill typically clock in at 30 to 38 minutes per game each, and in addition to jumpstarting the offense, they’re often tasked with guarding opposing teams’ best players.

They also complement each other. With Nunn out of the lineup in a 25-point loss to the Spartans, Hill struggled to find his shot and finished with 10 points – his lowest output of the season. Upon Nunn’s return the next game, Hill got to the free throw line seven times and tripled his point total, dropping 30 on 9-for-15 shooting.

Hill said the team has been going hard in practice, determined to step up for the remainder of the conference schedule.

“Practice has been like hell – I’m not going to sugarcoat it,” Hill said. “I think the key is, even though practice was tough, we can’t lose our minds. We have to focus on the gameplan.”

With 12 games remaining  before the Big Ten tournament, Illinois is looking to recapture the type of execution it showed against Purdue.