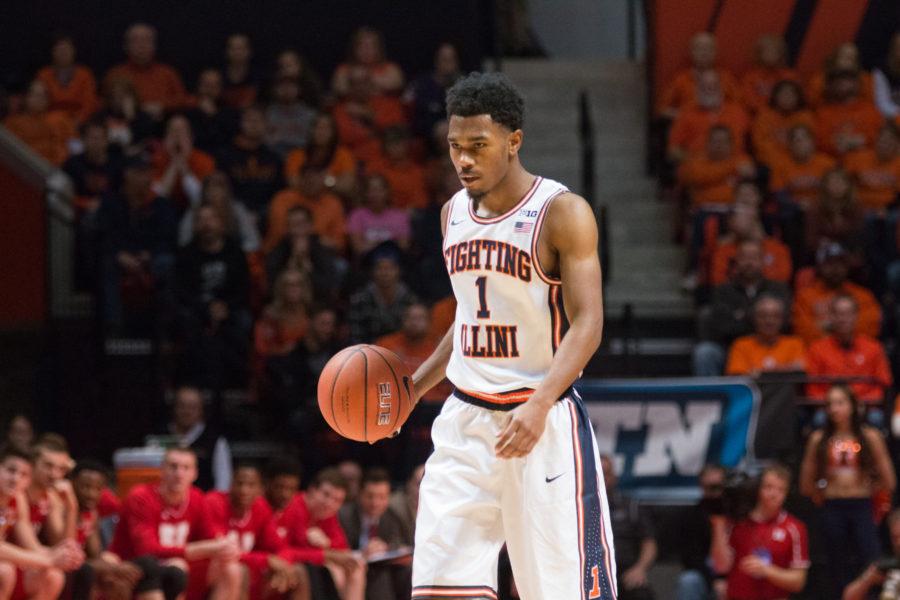 Illinois’ Jaylon Tate walks the ball up the court during the Illini’s 78-67 loss to Nebraska at State Farm Center on Saturday.

It’s easy to recognize a team playing with desperation.

We often see desperation from teams with their backs against the wall, with no other choice but to eat or be eaten. If a team plays desperate in college basketball it usually means bodies are flying across the floor for loose balls, defenders are swarming and you can see the hunger written on players’ faces.

For Illinois to have a shot at knocking off No. 25 Indiana on the road Tuesday, the Illini will have to play with some desperation added to their game. Asking for a do-or-die effort from an injury-ravaged, relatively young team in the middle of a .500 season might be a stretch, but a pedestrian showing simply won’t be enough to beat this Hoosiers team at Assembly Hall.

Indiana has won 10 straight games since starting 5-3 and is currently atop the Big Ten standings at 5-0. At 9-9 and 1-4 in conference play, the Illini are heavy underdogs in an arena where they haven’t won since 2010.

The home crowd will be extremely rowdy and will feast on the first Illinois mistake, so the Illini can’t let themselves get overwhelmed early like they did in their 25-point loss at Michigan State. Indiana likes to get out and push the ball in transition, so the points could pile up quickly if the Illini’s focus lapses.

Even though the Illini’s season is unlikely to completely turn around, Groce has no choice but to preach to his players that every game going forward requires a Herculean effort. Losing to Nebraska Saturday did Illinois no favors coming off its biggest win of the season over No. 20 Purdue, but stealing one at Indiana would make up for the ugly home loss.

The Hoosiers present some serious matchup problems for Illinois, as they have quick guards who can penetrate and either kick to spot-up shooters or dump off to their skilled forwards. Their offense is very high-powered and their glaring weakness is their propensity to turn the ball over.

Senior point guard and leading scorer Yogi Ferrell (17.1 points per game) has burned the Illini for three years now, and stopping him Tuesday will only be Groce’s first concern.

Second-leading scorer James Blackmon Jr. suffered a season-ending injury a couple weeks ago, but Indiana’s offense is still posting the second-highest effective field goal percentage in the country, according to kenpom.com. Robert Johnson and Nick Zeisloft are both deadly threats to score on the perimeter, which Illinois defends worse than 92 percent of the country’s 351 Division I teams.

Looking beyond the perimeter challenges Illinois are likely to face, Tuesday’s game also could cause major problems for the Illini down low. Though Groce wouldn’t rule out center Mike Thorne Jr.’s return to the lineup from a meniscus injury, both Thorne and sophomore forward Leron Black are both listed as out indefinitely with injuries.

Indiana’s Troy Williams is extremely long and athletic at 6-foot-7, and 6-foot-10 center Thomas Bryant is averaging 12 points per game as a freshman.

Illinois has little hope of winning games in which both Kendrick Nunn and Malcolm Hill aren’t performing at a high level. If both are up to their usual tricks and scoring over their respective 18-point-per game averages, the Illini can expend more effort trying to force the Hoosiers out of their offensive rhythm on the other end.

Anything less than an intense, locked-in Illini performance for 40 minutes will make winning incredibly difficult.

A desperate Illinois team shocked No. 1 Indiana three years ago in a game that helped save Groce’s first season. The stakes are different Tuesday, but a similar level of desperation could be needed to pull the upset.