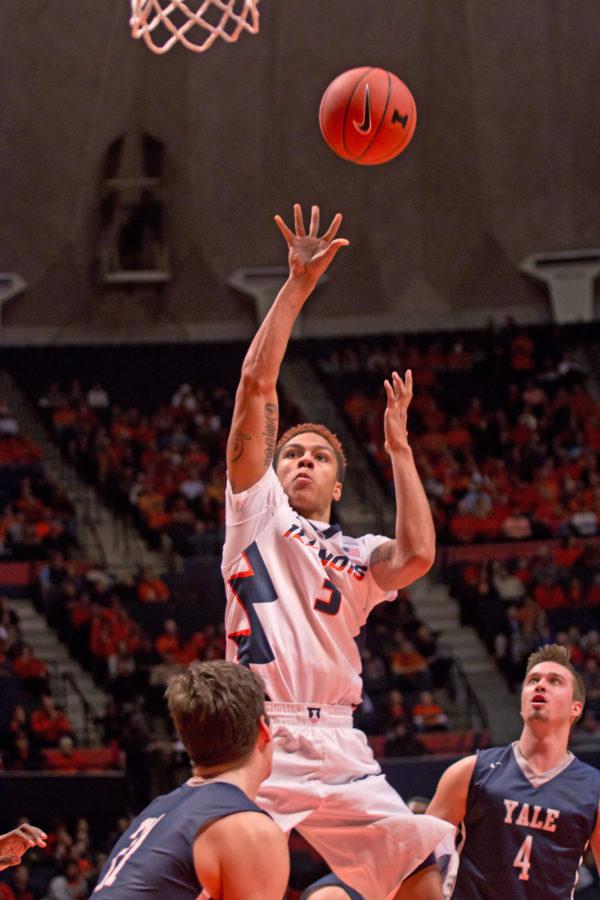 Illinois guard Khalid Lewis(3) takes a jump shot during the game against Yale at the State Farm Center on Wednesday, December 9, 2015. The Illini won 69-65.

Khalid Lewis was in the process of committing to play his senior season of college basketball at Illinois last August when he noticed strange headlines in the local Champaign papers.

A mumps outbreak was spreading on his future University’s campus in the form of a virus that Lewis knew virtually nothing about. Typically, between 400 and 500 people are diagnosed with mumps each year in the United States, meaning Lewis was hardly alone in his ignorance of the disease.

Just over four months later at the end of December, Lewis was quarantined in his campus apartment, having contracted the mumps himself.

“My body just didn’t want to do anything,” Lewis said of his five-day quarantine period. “My body was real weak. I probably was in bed like 95 percent of the time.”

Lewis sat out the first two games of Illinois’ Big Ten schedule as he recovered from the disease. The redshirt senior from Trenton, New Jersey, will only play this season for the Illini as a graduate transfer, and unusual circumstances led to his commitment to Illinois in the first place.

Lewis started his career playing one season at Delaware before transferring to La Salle, where he would sit out one season and play two. He averaged 6 points and 2.2 assists per game for the Explorers as a junior before graduating academically and electing to play his final year of eligibility elsewhere.

When Illinois senior Tracy Abrams suffered an Achilles injury at the end of July that would cost him the 2015-16 season — his second consecutive season-ending injury — junior Jaylon Tate was the only healthy point guard remaining on the Illini roster. Head coach John Groce was in desperate need of another floor general and found Lewis, who would be eligible to join the team and play right away.

“We feel blessed to have gotten him as quickly as we did when we recruited him,” Groce said. “He’s been a godsend.”

Lewis’ joined the Illini to split point guard duties with Tate, but his responsibilities on the court expanded almost immediately. Tate dislocated his right pinky finger in the Illini’s first game of the season and went on to miss the next four as he recovered. Lewis took over as the only true point guard on the Illinois roster until Tate returned on Nov. 27 and continues to play a majority of the Illini’s point guard minutes.

Lewis’ stats aren’t spectacular; he’s averaging 3.8 points and 2.9 assists in 22.6 minutes per game. But Groce shudders to think what this injury-riddled season might look like without the steadying presence he says Lewis brings to the floor. The 23-year-old almost never breaks composure, always keeping a fixed gaze focused up court when handling the ball.

“That’s his New Jersey style,” teammate Malcolm Hill said of Lewis. “That Jersey swagger. I guess that’s what you call it: just cool, calm and collected. That’s how he is.”

When fellow graduate transfer Mike Thorne Jr. went down with a torn meniscus Nov. 28 against Iowa State, Lewis became the team’s only active senior. Hill said Lewis hasn’t been afraid to make his voice heard as the team’s elder statesman.

“I’ve always seen myself as a leader, so I try to be as vocal as I can,” Lewis said. “Like I said, I’m an older guy. I try to stay poised so the rest of my team will stay poised. If they see me rattled, then everybody else could get rattled.”

While it was impossible for Lewis to have any impact in the two games he sat out with mumps — both losses to Michigan and Ohio State — he said he gained a different perspective on the game while watching his team struggle on TV. And when the isolation period that Lewis called “emotionally draining” was over, Groce noticed a difference upon his return.

“I think (the mumps) mentally kind of grabbed him, made him realize, man, the game gets taken away from you, makes you appreciate it a little bit more,” Groce said. “He’s come back with a lot of vigor, a lot of energy, a lot of effort.”

Lewis scored eight points in his first game back in a loss at Michigan State and played 26 minutes in a win against No. 20 Purdue, his handles unaffected by the Boilermakers’ full-court man pressure. Before Illinois’ loss to Nebraska, assistant coach Mark Morris reminded Lewis to make the most of what remains of his lone season with the Illini.

“Wow,” Lewis realized, pondering the twilight of his college career. “Time flew by.”