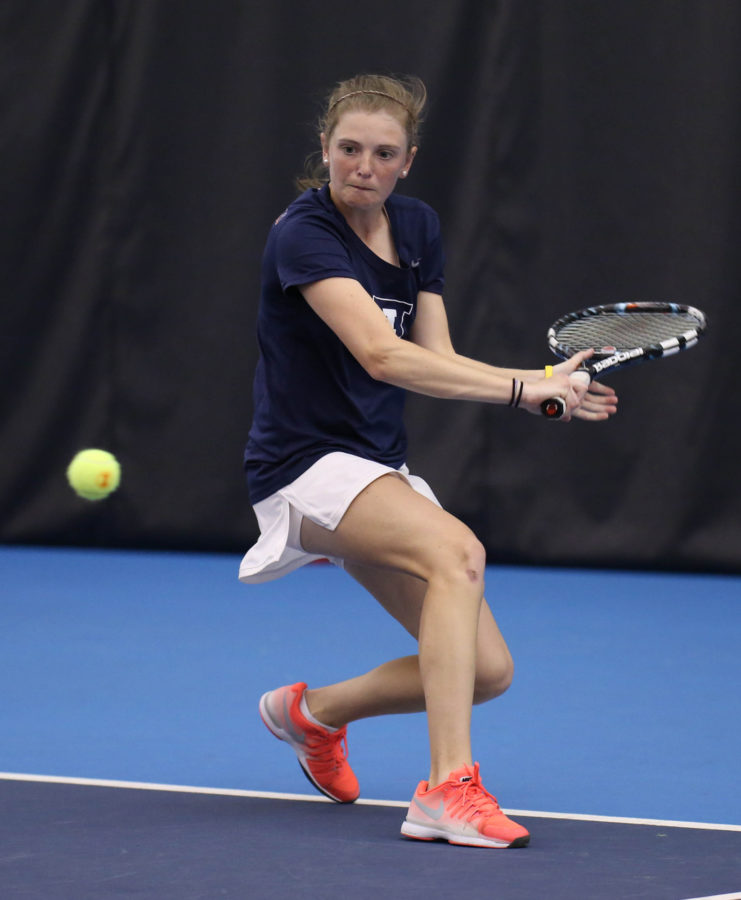 Illinois Alexis Casati attempts to return the ball during the match against Iowa at Atkins Tennis Center, on April 19, 2015. The Illini won 6-1.

The Fighting Illini women’s tennis team departs for Lubbock, Texas, this weekend to participate in the ITA Kickoff Weekend, where the Illini will play their third match of the Spring season against Virginia Tech.

The Illini returned to campus Jan. 7 to compete in a two dual matches, defeating both Eastern Illinois and IUPUI.

“We’ve been training hard for this. We’ve had two-a-day practices and done lots of conditioning and lots of weights. We are in really good shape and I think we are ready to go,” interim head coach Evan Clark said.

Clark will be serving as head coach for the 2015-2016 season as former head coach Michelle Dasso’s contract was not renewed last summer.

The Illini finished 14-10 last Spring and missed the NCAA Tournament. They have set high expectations not only for this weekend, but for the rest of the season.

“We are just taking one match at a time,” Clark said. “but I expect us to compete with everybody down there and win the Kickoff and hopefully qualify for national indoors.”

None of the current Illini have played in the ITA Kickoff Weekend tournament, but they feel confident they can be successful.

“We’ve been playing a lot of points and doing a lot of repetition to prepare for this. Hopefully, we can go 2-0,” junior Louise Kwong said.

If the Illini beat Virginia Tech they play the winner of host Texas Tech and Oregon. A matchup with the Red Raiders would be a reunion of sorts — former Illini assistant coach Ric Mortera is their head coach and he brought on former Illini All-American Melissa Kosinski to be a volunteer assistant coach this season.