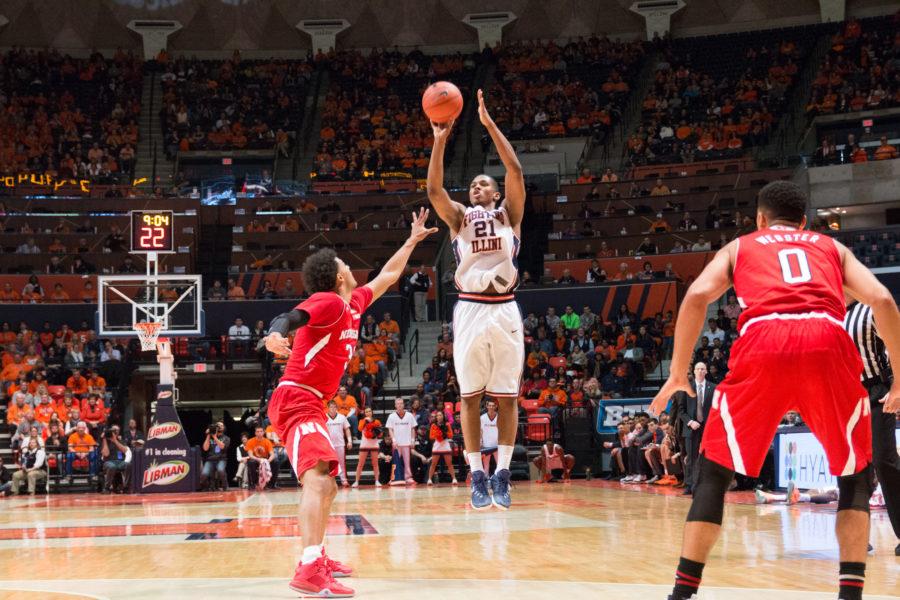 Illinois’ Malcolm Hill shoots a 3-pointer over Nebraska’s Shavon Shields during the Illini’s 78-67 loss to the Huskers at State Farm Center on Saturday.

Illinois has had a rough season so far on its way to a 9-10 overall record, but its opponent Saturday has been worse.

Minnesota (6-13, 0-7 Big Ten) has been dreadful in Richard Pitino’s third year and is looking to snap an eight-game losing streak when it faces Illinois on Saturday night at Williams Arena. It’s a matchup that has devolved into a Battle for the Basement; a game that what remains of both fan bases are circling as their team’s best chance to pick up a win until they play Rutgers.

It’s hard to believe these schools took the floor in Champaign three years ago as the No. 8 and No. 12-ranked teams in the country.

The advanced stats say this game is a toss-up on paper, and there are cases to be made for both teams in determining which is in a sadder state of affairs.

Illinois followed up its biggest win of the season over No. 20 Purdue with a deflating loss to Nebraska, then compounded that performance by literally playing the worst game the program has seen in over 20 years against Indiana. Minnesota’s record is ugly, but the Gophers should feel like the more confident team when they tip off Saturday at The Barn.

Despite losing 11 out of its last 12 games—with its lone win in that stretch coming against Chicago State—Minnesota somehow managed to push Indiana and Michigan to the brink of defeat in its last two games. To put it mildly, those are two teams the Illini struggled with.

So while the Gophers look to be improving and might be at least putting some semblance of a basketball team together, the Illini are regressing. They haven’t won a true road game since last Feb. 7 and are 1-5 in Big Ten play. The fan base is reeling and seems to be turning against head coach John Groce more with each passing day — a coach who pretty much admitted in the Indiana postgame press conference that he has no idea why his players aren’t performing up to their capabilities.

To make a case for Illinois against the Gophers, there are a couple of factors to look at. First, being one year deeper into his stint, Groce is probably under more pressure than Pitino at this point to get results. If Groce can revive some of those motivational tactics we all harped on in his first couple seasons, maybe he’ll can get his guys to truly play like they’re staving off a total team meltdown.

The Illini also have an edge in talent over Minnesota. The Gophers don’t have one player who can match either Kendrick Nunn or Malcolm Hill’s production, much less two. Add gifted freshmen Jalen Coleman-Lands and Michael Finke with the return of senior center Mike Thorne Jr. to the lineup, and the Illini look to be a deeper and more skilled team offensively.

Joey King and Carlos Morris are both seniors and nice players for the Gophers, but the team’s offensive output as a whole is putrid. As a unit, they don’t rebound, pass or shoot well at all, but the Illini will face a challenge in stopping Gopher point guard Nate Mason.

The sophomore is Minnesota’s leading scorer at 12.9 points per game and is also distributing four assists per outing. Illinois has been particularly poor at stopping dribble penetration this year and usually gives up easy dump-offs in the paint when trying to prevent point guards from driving and kicking to open shooters. Mason and King could give the Illini fits on Saturday if their defensive rotations are lacking again.

To restore some confidence in Groce and the direction of the program, fans will need to see nothing less than full effort and intensity from the Illini on display Saturday. It’s tough to say any one game is a must-win until the Big Ten Tournament at this point, but fans are growing tired of moral victories, too.

Losing to a terrible Minnesota team under any circumstances would only dim Groce’s chances of turning this team and program around.