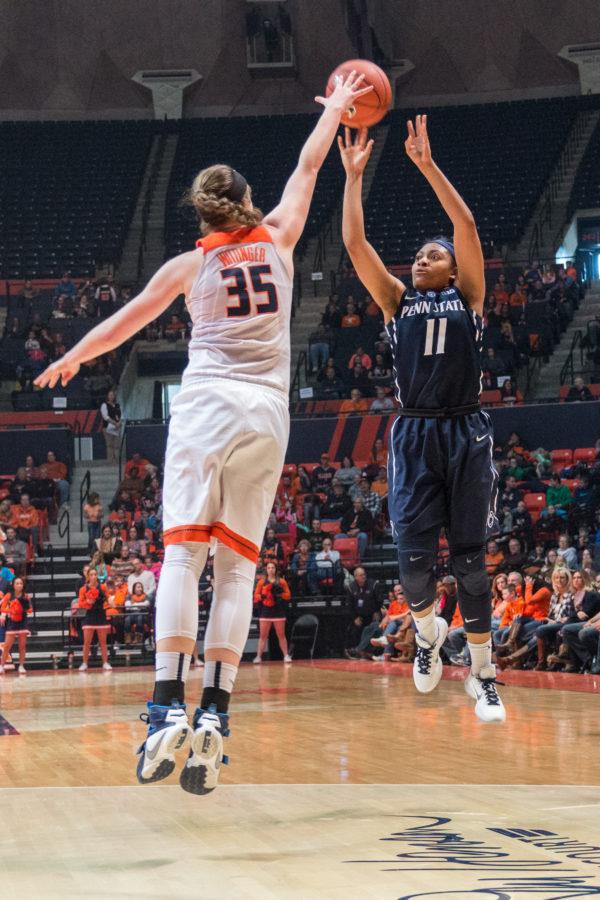 Penn State's Teniya Page shoots a 3-pointer over Illinois' Alex Wittinger. Teniya scored 17 points in the second half to help the Nittany Lions defeat the Illini 65-56 on Saturday, Jan. 23 at State Farm Center.

The Illinois women’s basketball team couldn’t buy a basket down the stretch of another Big Ten match.

In similar fashion to its loss against Indiana, the Illini faltered against Penn State down the stretch and relinquished a five-point lead midway through the fourth quarter. The Nittany Lions took advantage of Illinois’ inability to make a shot and secured a 65-56 victory at State Farm Center.

Both Illinois and Penn State struggled to score in the first half, recording 23.5 and 21.4 shooting percentages, respectively. In the third quarter, however, Illinois was able to get its shots to fall, which led to a 10-point lead in the third quarter.

Penn State found its rhythm in the fourth and finished the half with a 60.9 field goal percentage. Freshman and former Illini recruiting target Teniya Page led the way for the Nittany Lions with 27 points.

“I don’t think I have ever recruited a kid harder than I recruited her,” Bollant said. “And tonight you saw why I went after her so hard. She is a really good player, and she made shots down the stretch.”

Illinois was able to find success on the boards throughout the game despite its height disadvantage. Center Chatrice White collected a team-high 18 rebounds to go with her 10 points in the game.

Forward Alex Wittinger gave the team second chances on the offensive end by bringing in six of her eight total rebounds on offense. In total, Illinois was able to outrebound Penn State 18 to seven on the offensive side of the court.

“We were playing great defense and collected a lot offensive rebounds,” White said. “(Wittinger) was getting a ton of boards. That really helped us control the offensive end. Defensively, we were doing what we do best and only letting them get one shot.”

The Illini relied heavily on the three-ball throughout the game, but they were only able to knock down five of their 23 shots. Bollant said after the match that the players settled for the perimeter shot after not being able to see the open post player.

With the loss, Illinois falls to 1-7 in the Big Ten with a game Tuesday at Minnesota. Bollant stressed that the team needs to be able to make shots in big moments towards the end of games, which it has struggled with in its last two games.

“I think you have to have the courage to step up and make a shot,” Bollant said. “That’s leadership of making a play when it needs to happen. We need our leaders to do that for us.”