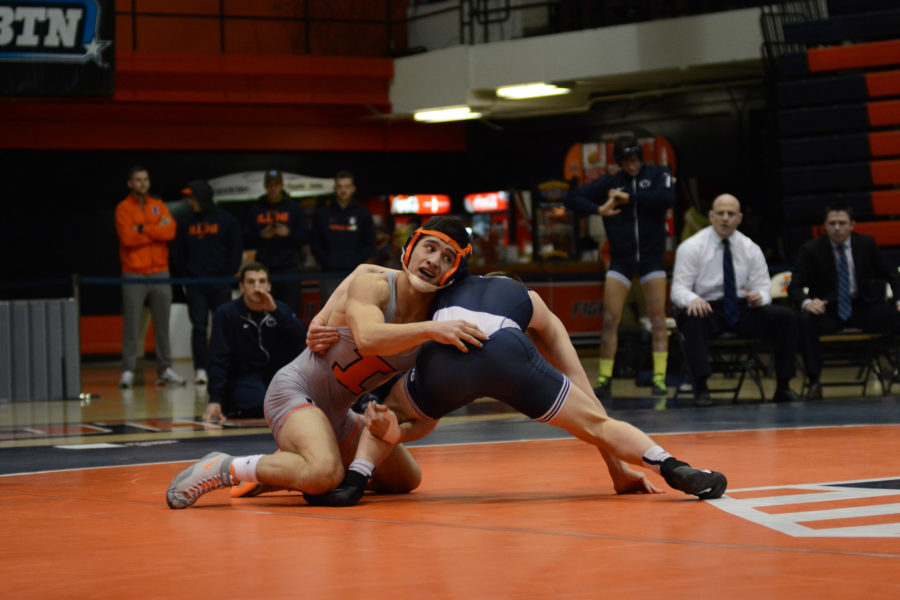 At 19-0 on the season and 54-0 dating back to last year, sophomore Isaiah Martinez was atop the wrestling polls at No. 1 in his weight class.

On Saturday, the 1,407 in attendance at Huff Hall saw him lose.

Penn State’s Jason Nolf — No. 3 in the country — pinned Martinez in the second period.

Nolf, who came in with an perfect record on the season, started off the highly anticipated match with an early takedown to make the score 2-0.

Martinez followed up Nolf’s takedown with one of his own, while adding an escape, to make it 3-2 Martinez with 45 seconds left in the first period.

Nolf knotted the score at three after an escape at the end of the first period and appeared to gain momentum.

The Nittany Lion redshirt freshman controlled the second period, opening in the down position and earning another escape to make the score 4-3.

Nolf used a variety of quick moves to put Martinez in trouble and found himself hooking the leg and pinning the shoulders to the mat almost five minutes into the match to earn the win and improve his record to 24-0.

“Anytime you lose a match, it hurts, but it’s not like I’ve never lost a match in my entire life,” Martinez said. “Wrestling 18 years, I’ve lost many, many matches. The fact that it just hasn’t happened in a while — it stings — but the streak and everything like that, it’s not really on my mind.”

At 174-pounds, a matchup between No. 5 Zac Brunson of the Illini and No. 1 Bo Nickal of Penn State proved to be another match that could go either way.

Nickal came into the Saturday dual with only one loss on the season. With Nickal leading 4-3 to begin the third period, Brunson started in the down position and added another escape, tying the score at four.

Brunson seemed to be gaining momentum with back-to-back escapes, but Nickal ended any hopes of Brunson winning with a takedown once he gained control.

Unranked Jeff Koepke provided a silver lining for Illinois when he defeated No. 10 Matt McCutcheon at 184-pounds.

“It was a close match and I was wrestling alright in the first,” Koepke said. “I didn’t get to my attacks that early, but kind of felt him slowing down and once I got to my attacks. I knew I could finish there. It just so happened that his knee blew out.”