No.17 Illinois women's gymnastics falls to No.3 Michigan 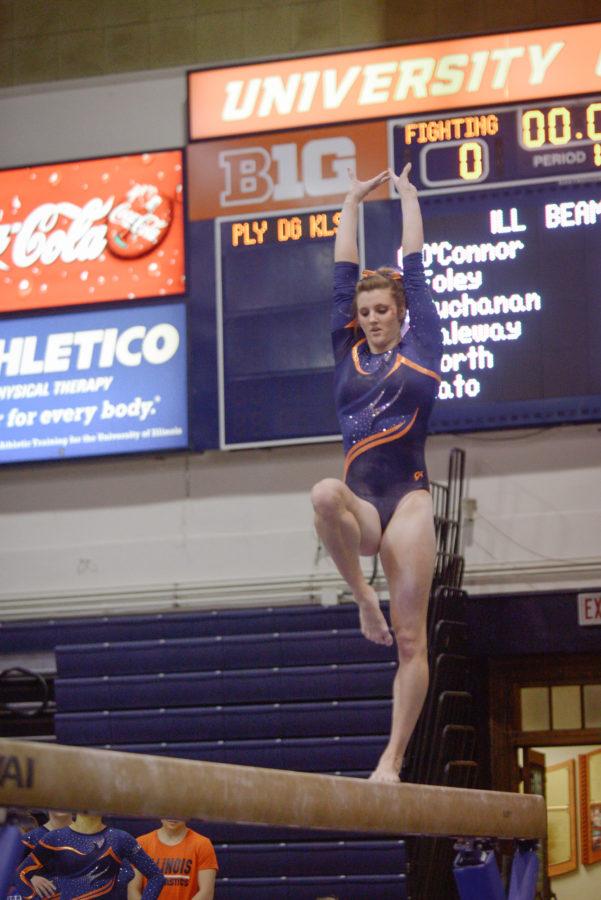 Illinois’ Mary Jane Horth performs a routine on the balance beam during the meet against Minnesota at Huff Hall on Saturday, February 7, 2015. The Illini won 195.775-195.375.

Competing on home turf was a helpful change of atmosphere for Illinois.

“We always love being back in Huff,” said junior Mary Jane Horth. “Seeing familiar faces out in the crowd is so nice and they bring a lot of energy to us — it really helps us compete.”

Illinois started out on the vault, racking up a total of 48.850 points — senior Giana O’Connor lead the board with a season-best of 9.850.ss

On the bars rotation, Illinois found their weakness by scoring a 48.275, their lowest total of the night.

Horth led the event with a score of 9.900, tying her season best and sharing the event title for the night.ss

“I’ve been working on all the little details,” Horth said. “It was just nice to come out and do that routine today and hopefully I’ll keep them coming.”

Sunny Kato led Illinois on the beams scoring a 9.875, placing her third overall. Lizzy LeDuc and Bridget Hodan followed with scores of 9.825 and 9.800 respectively.ss

As a team, Illinois racked up two event titles as well as five top-3 finishes — Horth claiming third in the all-around with a season best 39.275. The loss to Michigan brings them to 1-1 in the Big Ten.ss

Despite the decent performance from Illinois, coach Kim Landrus thinks the team should be producing better than what she saw during this matchup.

“There were bright spots, but as a whole, we made too many mistakes,” said head coach Kim Landrus. “A team with this talent has to find a way to get the job done. We have four days of practice this week and I fully expect them to focus on the things that could have gone better today. The pieces are there, but those pieces only are good if we can put them all together.”

Worth is ready for the team to show that they can reach new heights.

“We expect to hit that 196 and just keep pushing the bar from there,” she said.