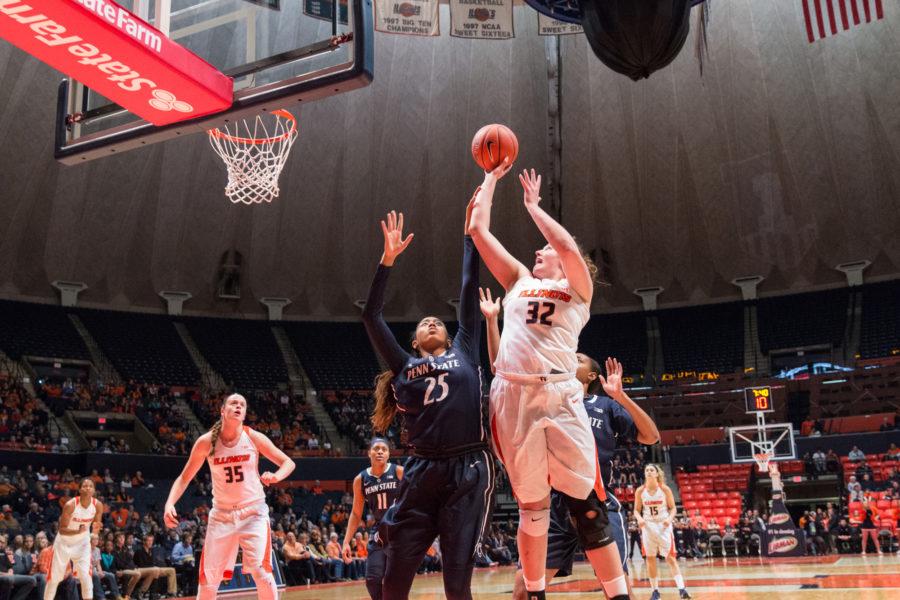 Illinois' Chatrice White goes up for a layup during the game against Penn State at the State Farm Center on January 23. The Illini lost 65-56.

Tweet: Illinois will look to avenge its worst loss of the season when it takes on Minnesota at Minneapolis

The Illinois women’s basketball team will have an opportunity at revenge when it takes on Minnesota on Tuesday night.JT

The game, which will be played in Minneapolis, will be the second meeting between the two squads this season. The Golden Gophers blew out the Illini in the first game, 106-75, on Jan. 7. It was the largest margin of defeat Illinois (8-11, 1-7 Big Ten) has suffered this season.JT

Head coach Matt BollantJT said he expects to see his team display more effort on the defensive end this time around. In the first matchup, Minnesota jumped out to an early 11-0 lead from which Illinois was never able to recover from.

“When they came here, we got off to a terrible start defensively, and we got a little embarrassed,” Bollant said. “We didn’t really respond much. I think we will fight. We have fought a lot more these past few games.”

Minnesota (13-6, 5-3 Big Ten) is on a three-game winning streak and sits in sixth place in the Big Ten.JT

The Golden Gophers have relied heavily on guard Rachel Banham, who averages 24 points and 6.4 rebounds per game. Against the Illini, the senior went off for 39 points, a season high for her.JT

“We have to take responsibility to guard her and not let her get in a rhythm with her shot,” Bollant said. “She made a couple of tough shots last time, but we also gave her some open looks as well.”

Illinois’ main weapon — center Chatrice WhiteJT — had a standout performance in the last game against Minnesota with 24 points and 11 rebounds.JT She is coming off her best rebounding game of the year in which she brought in 18 rebounds against Penn State.JT

Despite White’s play, Illinois is last in the Big Ten after going 1-10 in its last 11 games.JT As the team heads into the final month of the season, it will need to make a strong push over the course of its final 10 games in order to redeem its season.

Freshman forward Alex WittingerJT believes that the turnaround can start with a strong performance against Minnesota. For the Delano, Minnesota native, the game will be somewhat of a homecoming, and is confident about her team’s chances against the Golden Gophers.

“It’s going to be a different game than last time. That’s for sure,” Wittinger said. “I’m excited because I get to go back home to play them. We’re a much better team than when we played them last time. We are moving the ball and getting a lot more open looks.”