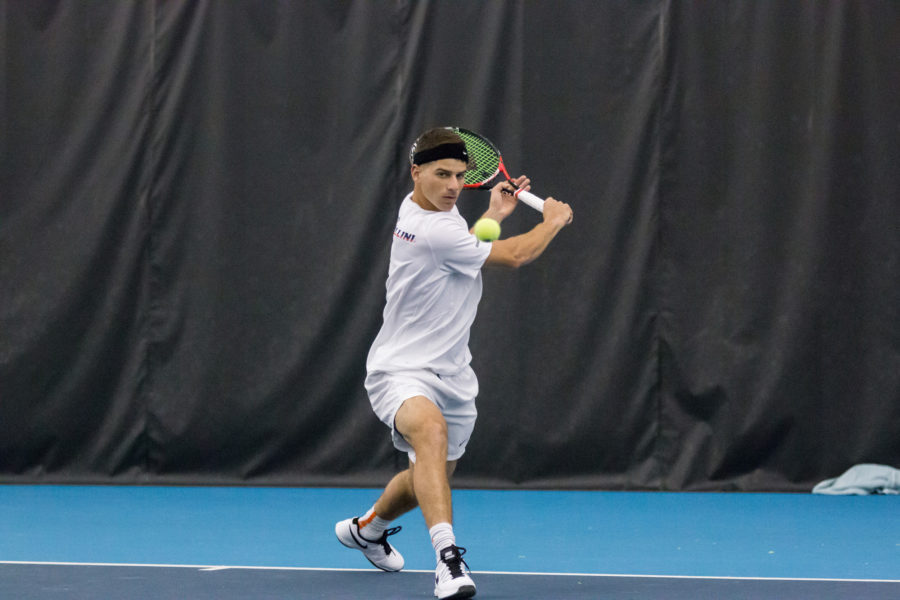 Illinois’ Aron Hiltzik returns the ball during the match against Valparaiso at the Atkins Tennis Center on Friday, January 22, 2016. Illinois won 4-0.

The No. 7 Illinois men’s tennis team showed few signs of rust in its opening weekend matches.EJ

The Illini first hosted the Valparaiso Crusaders in their dual season opener. The team initially got on the board with a doubles point, taking two out of the three matches. The doubles partners of sophomores Aron Hiltzik and Aleks Vukic, along with senior Brian Page and redshirt junior Julian Childers were victorious.EJ

On the singles side, Aron was the first off the court, as he defeated Charlie Emhard in straight sets (6-3, 6-3). Vukic and teammate Alex Jesse followed, defeating their opponents both in straight sets.EJ As a result, the Illini swept the Crusaders 4-0, earning the team its first dual meet victory of the season.EJ

“We’ve had really good couple of weeks of preparation,” head coach Brad Dancer said. “Our guys have really been focused.”

The Illini then went up against the Notre Dame Fighting Irish, who came into play ranked No. 36, according to the ITA rankings.EJThe match was a part of the opening round of the ITA Kick-Off weekend featuring the University of Tulsa and Northwestern University. The Hiltzik/Vukic and Page/Childers pairs again defeated their opponents to secure the first point of the match.EJ

Senior Jared Hiltzik gave the team another point when he cruised to a 6-0, 6-2 victory over Eddy Covalschi.EJ Vukic was next off the court, winning 6-2, 6-4 against Quentin Monaghan.EJ Jared’s brother Aron locked up the victory for the team by defeating Alex Lawson 6-4, 6-2.EJ The Illini again swept its opponent, 4-0.

After Northwestern defeated Tulsa, the Illini faced the Wildcats for the chance to advance to the ITA National Team Indoor Championship. Childers teamed up with freshman Pengxuan Jiang to defeat their opponent 6-3. Jesse and Jared locked up the first point of the match by winning 6-3.EJ

Illinois continued its success in singles, as Jared had little problems with Sam Shropshire, defeating him 6-2, 6-2. Childers had to close out a tight first set but ended with a 7-6 (7-5), 6-3 victory. In the ninth game of the second set, Childers was forced to deuce on his serve and completed the match after a long, drawn-out rally. After dropping his first set, Vukic regained focus and defeated Konrad Zieba 3-6, 6-1, 6-4.EJ

“Vukic wasn’t really sharp at all tonight, but he really just stayed mentally tough and kept himself composed and obviously had a chance to close out the match,” Dancer said.

The Illini, for the third consecutive match, defeated their opponents by a score of 4-0.EJ Jared was impressed by the weekend, especially with the win over the No. 25 Wildcats.EJ

“This year, we didn’t really know where we were going to be,” Hiltzik said. “We lost some top guys from last year, and this was a big growing match for us.”

The Illini will go on the road next weekend, facing top-25 opponents in North Carolina (No. 10) and Duke University (No. 23).EJ The ITA National Indoor Championships will be held on Feb. 12t-15 in Charlottesville, Virginia.EJ