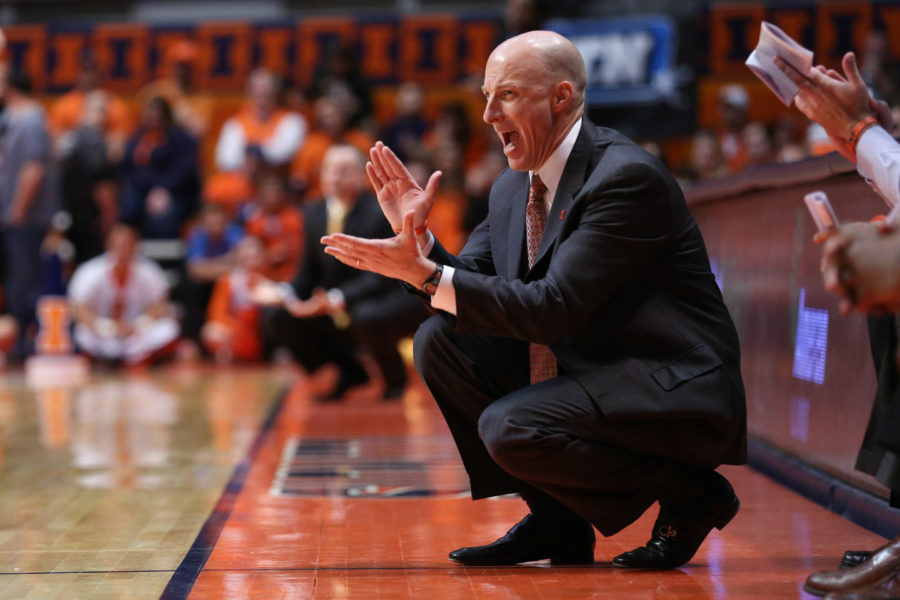 John Groce was an assistant on the 2005 Ohio State team that handed then-No. 1 Illinois its only regular season loss. Since becoming Illinois’ head coach, Groce is 1-5 against Ohio State.

Ohio State has been on different level than Illinois lately when it comes to revenue sports.

Since 1999, the Buckeyes have won two national titles in football and have been to three Final Fours in basketball (one was later vacated). There isn’t much of a rivalry with Illinois, because Illini revenue sports have been nothing to them in but an occasional annoyance capable of pulling an upset.

Even that epic football win by Ron Zook’s Illini over No. 1 Ohio State in 2007 had virtually no consequence for the Buckeyes, who still made the BCS national championship game that season.

But despite the lack of animosity between the schools, Ohio State still owns a piece of Illinois lore that many Illini fans won’t ever be able to forget. Even though I was 11 years old at the time, I remember the moment vividly.

The 2004-05 Illinois basketball team was five seconds from a perfect, undefeated 30-0 regular season when a Buckeye junior forward hit the biggest shot of his life. Matt Sylvester’s three from the wing gave Ohio State a 65-64 lead and ultimately the win over the No. 1 Illini, ruining their chances at being NCAA basketball’s first undefeated team since Indiana ran the table in 1976.

I still remember that empty feeling of disbelief when Roger Powell’s desperation three went wide at the buzzer and Ohio State fans stormed the court. That 2004-05 team was so incredible that defeat seemed inconceivable at the time, especially to an 18-12 Ohio State squad.

If you want to torture yourself and re-watch old footage of the final moments of that game, you’ll see a young, thin-haired Buckeye assistant coach hugging his players on the court in the ensuing melee. That was Ohio State head man Thad Matta’s assistant and understudy John Groce, who left Matta’s program in 2008 to become head coach at Ohio.

Now that Groce is in his fourth year in charge in Champaign, he’s had frequent chances to stick it to his long-time boss and reverse the trend of relative hoops dominance by the Buckeyes over Illinois in the last decade.

In their first matchup as Big Ten opponents Groce did just that in a beat-down over No. 8 Ohio State at Illinois’ Assembly Hall, but hasn’t been able to beat Matta since. He’s 1-5 against Ohio State in three-and-a-half seasons at Illinois, with a chance to make that record a little less lopsided Thursday when the young, talented and inconsistent Buckeyes visit State Farm Center.

If you’re someone who looks the other way when it comes to relatively minor NCAA infractions, Ohio State’s athletic program is the gold standard.

They have unbelievable facilities, a massive budget and a glistening national brand. When you have LeBron James endorsing you — I know, he’s from Ohio, but still — and Drake rapping about you, you’ve pretty much achieved Peak College Athletics Program for all intents and purposes.

Through remarkable success on the field and on the court, they’ve reached what every Illinois fan should want this maligned Illini athletic department to eventually become.

No, a win over the Buckeyes Thursday won’t save the 2004-05 team’s perfect regular season. It won’t give Groce the last laugh over his friend Matta and it certainly won’t elevate Illinois sports past little-brother status in their dormant rivalry with Ohio State.

But it would at least be a nice start.