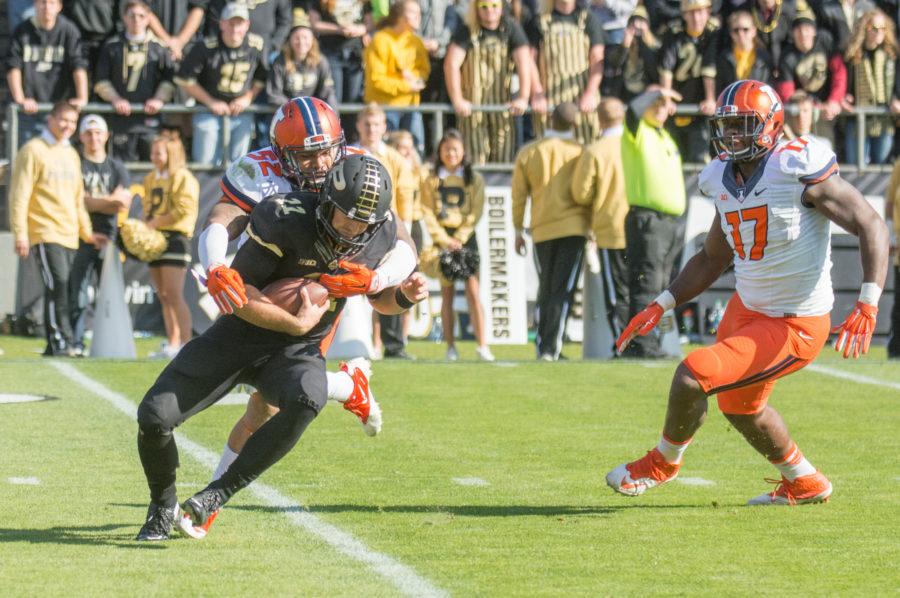 Linebacker T.J. Neal Jr. (52) will transfer out of the Illinois football program. He is a graduate transfer who will be eligible to play in the fall 2016.

As first reported by The News-Gazette, linebacker T.J. Neal Jr. plans on transferring from Illinois. The Pennsylvania native made the announcement official in a tweet that he sent out Tuesday afternoon. cb

Neal graduated from the University and intends on playing out his last year of eligibility. He will not be able to transfer to any of Illinois’ 2016 opponents but the linebacker won’t have to sit out a season because of the NCAA’s graduate transfer rule.

The departure of Neal means Illinois has lost six of its top seven tacklers from the past season — only Taylor Barton returns next year. Defensive coordinator Mike Phair will have a slim linebackers corps with the graduation of Mason Monheim and the departure of Neal. Players like former star James Crawford, Tre Watson and Mike Svetina are likely the ones to be slated as starters during the spring.

Neal’s departure comes during a time when many players have announced there plans of transferring to other schools. A report from the IlliniInquirer stated that Marchie Murdock, Henry Enyenihi and six other graduating seniors are planning on leaving the program. Several players have posted transfer announcements on Twitter. cb

Cubit will have a week to try to fill the holes with recruits. A few recruits have committed and decommitted during the past few days so Cubit’s coaching staff will need to hit the road offering scholarships to more players.

Follow The Daily Illini for updated information about changes made to the roster and for coverage of next week’s signing day.