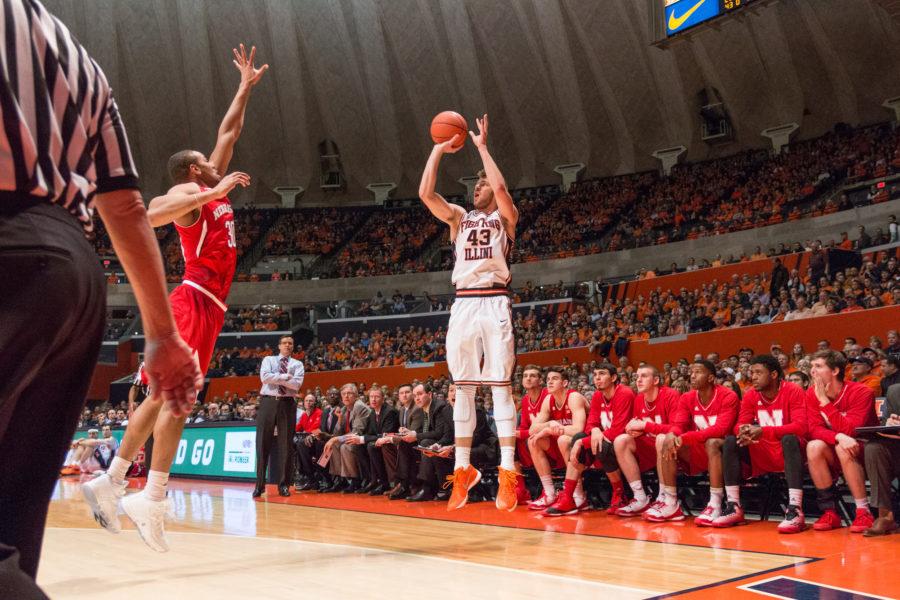 Illinois’ Michael Finke shoots a 3-pointer during the Illini’s 78-67 loss to the Huskers at State Farm Center on Saturday, January 16.

Tweet: [email protected]_Michael and @Maverick_Morgan combined for 23 rebounds vs. Minnesota. Next up for #Illini hoops is a matchup with @OhioStateHoops

Malcolm Hill’s turn-around jumper glanced off the front rim during the first half of Illinois’ win against Minnesota. Surrounded by three Gophers, Michael Finke won the battle for the offensive rebound, took one power dribble and finished with his left hand.

Hill (28 points, 10 rebounds) got in on the action as well, providing four second-chance opportunities for the Illini. The junior co-captain praised his teammates and hopes they can continue to do damage on the boards with Thorne Jr. seeing limited action.

“Mav and Fink showed their potential with what they can do on the backboard,” Hill said. “That’s big time for us. And a lot of them were offensive rebounds to give us second chances.”

With 2:26 remaining in overtime Saturday, Hill cashed two free throws to extend Illinois’ lead over Minnesota to nine. The latter end marked Hill’s 26th point of the game and 1,000th point as an Illini. When he got back on defense, Hill clapped and pointed to the upper deck of Williams Arena, where the Orange Krush gave its star player props by chanting, “That’s a 1,000!”

“I would love to get the 1,000 at home, but you know, to celebrate with the Orange Krush here — my brothers — that’s big time,” Hill said.

Hill scored nine of Illinois’ 16 overtime points, and after the game, he stressed the importance of the team’s first conference road win.
“Every Big Ten game is tough, and to get one on the road, our first road kill,” Hill said. “It’s fun too, because it’s your brothers against the world. When the gym gets quiet on the road — I love that feeling.”

Head coach John Groce said the biggest takeaway from Saturday’s game was his team’s resiliency. The Illini (10-10, 2-5 Big Ten) clawed their way back from down eight in the first half and down seven in the second half against the Gophers (6-14, 0-8 Big Ten).

“I loved the look in their eyes today,” Groce said.

Unsurprisingly, Hill and fellow junior guard Kendrick Nunn (13 points, five rebounds, three assists, three steals) took the most shots out of anybody who touched the floor. The usual suspects had it going, but it was the production from Finke and Morgan that stood out. According to Groce, Thorne Jr. is still “a long way” from reclaiming his starting spot due to the lingering knee injury.

Meanwhile, junior point guard Jaylon Tate played 40 of the game’s 45 minutes against Minnesota, finishing with six dimes with zero assists. He shot only twice, but he’s never been considered a big scorer — he stayed in his lane as floor general and distributor.

Hill said the biggest thing the Illini need to work on is burying teams once they capture an early lead.

“We’ve got to get better at trying to put teams away. We were up by seven (against Minnesota),” Hill said. “We’ve gotta learn to go on a run when we’re up seven, instead of letting teams back in.”