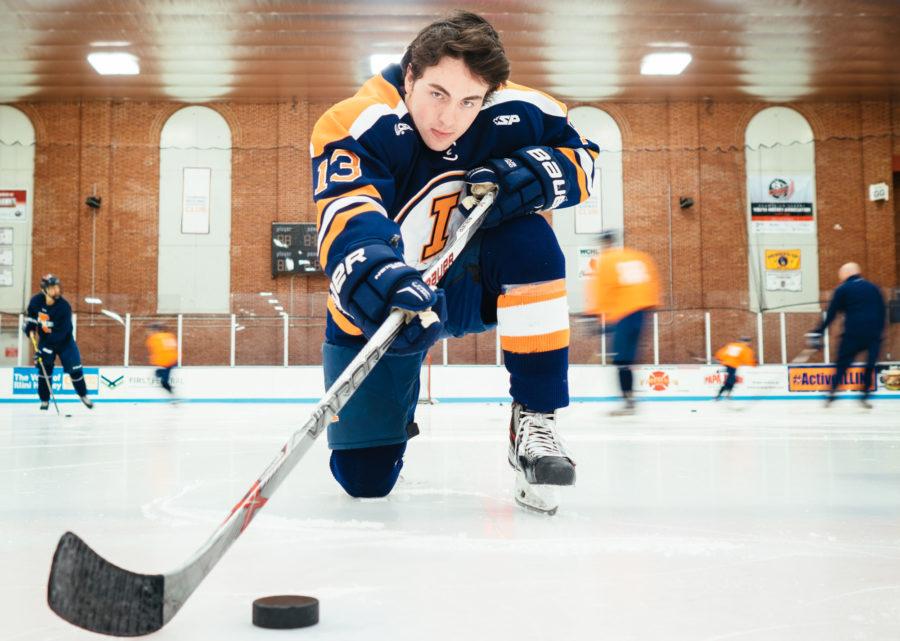 Sophomore forward James Mcging has no “C” stitched on the front of his jersey like senior Captain John Olen, nor the alternates’ “A” like Eric Cruickshank and Austin Zima.

He’s not the one who scores the most goals or speaks out when huddled with his teammates.

But Mcging is a leader for the Illini in every sense of the word.

He lead Illinois to a two-game sweep of Rochester College over the weekend, orchestrating an Illini offense that netted 11 goals over Friday and Saturday combined. Seven of those goals were — in one way or another — a product of Mcging’s stick: the sophomore skater racked up three goals and four assists against the Warriors. cb

“Our line just really started to click,” Mcging said. “Me, (John Olen), and Eric (Saulters) hadn’t played together at all this season. (Head coach Nick Fabbrini) was just looking to find some more offense, and it definitely worked out in our favor.”

Even though his seven-point weekend is something that certainly sticks out on a stat sheet, Mcging’s season as a whole has been just as impressive.

He leads Illinois with 36 points, which ranks No. 29 in the ACHA, second in the CSCHL and is six more points than Mcging had his entire freshman season. From Oct. 2 through Oct. 30, Mcging boasted a seven-game point streak, totaling 13 points over the span. He also holds team season-highs for points and assists in a game, with four and three respectively. cb

“His skating ability and vision are both top notch,” Fabbrini said. “His speed and his ability to see the play on the rush and off the cycle in the offensive zone makes him a dangerous player in any situation.”

Mcging’s most prominent attribute is his ability to setup his linemates, exemplified in his team-leading 25 assists. cb

He has been the centerpiece of Fabbrini’s starting line, quarterbacking one of the best lines in the country through the first half of the season with talented scorers Cruickshank and Grant Stueve. Now paired with the veteran Olen, his numbers have increased. He has 10 points in six games since the line change on Jan. 9. cb

“He turns nothing into something very often,” Cruickshank said. “He’s slippery in the corners and makes plays, it’s easy to play with someone who can get you the puck like he can.”

“I actually played defense for a while before I switched to forward,” Mcging added. “So it took me a really long time to learn to shoot when I had the chance, so it’s benefited me to know I can always pass it to someone who’s better at scoring than I am.”

Mcging also leads the team in a much less glorious statistic: penalty minutes. The sophomore has accumulated 67 minutes in the penalty box already this season, 20 of which came in one game – Nov. 13 in a shootout loss to Iowa State. Mcging doesn’t characterized himself as a dirty player, but rather a passionate one who doesn’t mind sticking up for his teammates.

“I’m not as vocal on the ice, but I definitely try to get the guys fired up and stick up for them when it gets dirty out there,” Mcging. “But I know I do some stupid stuff sometimes, and I think I’ve toned it down.”

Whether it’s scoring a goal, dropping a dime or dropping gloves, when Mcging is on the ice he makes things happen for the Illini. His teammates and coaches say his value goes beyond quantifiable measurements such as goals and assists, and since he is just a sophomore, his value isn’t likely to fade anytime soon.

“I tell him all the time that I think he’s one of the best in the country,” Fabbrini said. “In his own way, he is a leader. Guys follow him, we need him to continue that role.”