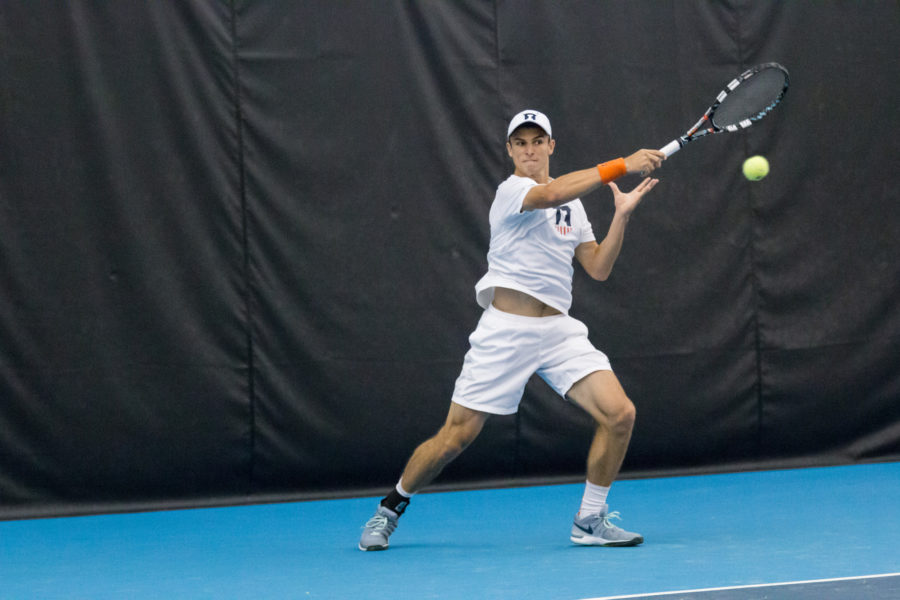 Illinois' Aleks Vukic returns the ball during the match against Valparaiso at the Atkins Tennis Center on Friday, January 22, 2016. Illinois won 4-0.

The Illinois men’s tennis team has quite a challenge this weekend.

Illinois will head into the matches with some momentum after defeating Valparaiso, Notre Dame and Northwestern — each by a score of 4-0. The past weekend’s results allowed the Illini to punch their ticket to the ITA National Team Indoor Championship, which will run from Feb. 12-15.

Multiple Illini had strong matches against the three teams over the weekend, most notably sophomore Aleks Vukic. Vukic first knocked off No. 37 Quentin Monaghan of Notre Dame and then defeated No. 12 Konrad Zieba of Northwestern on the following day. The Big Ten Conference was impressed with Vukic’s performance of knocking off two top-50 opponents, earning him Big Ten Tennis Athlete of the Week.

“The players have been pushing me, and the coaches are fantastic,” Vukic said. “This Big Ten award is really just for the team, so I am just happy to be recognized.”

The sophomore ended the weekend with a 5-0 record in the singles and doubles matches he competed in.

Head coach Brad Dancer complemented Vukic, but knows that he has more work to do as the season progresses. Dancer knows that his team will need to be prepared for going up against solid competition over the weekend.

“No offense to him or anyone else, but he did not play that well over the weekend,” Dancer said. “He has a lot of work left, but we are seeing some things in practice that he is starting to get back, so it is a good sign for the weekend.”

Nicolas Alvarez of the Blue Devils may pose a formidable challenge to Illinois, as he is ranked No.12 in the ITA player rankings. Duke enters its match against the Illini with 1-2 record, falling to No.55 Kentucky and No.19 San Diego. The Blue Devils defeated unranked Elon in their lone victory of the season. The Illini were defeated by the Blue Devils in a regular season match last year.

North Carolina enters its matchup against Illinois with a 4-0 record. The Tar Heels knocked off No. 40 North Carolina State and No. 50 Indiana University. The team has an extremely young, talented squad with three freshman ranked in the top-50 of the ITA rankings — No.7 Ronnie Schneider, No.43 Brett Clark and No.47 Robert Kelly.