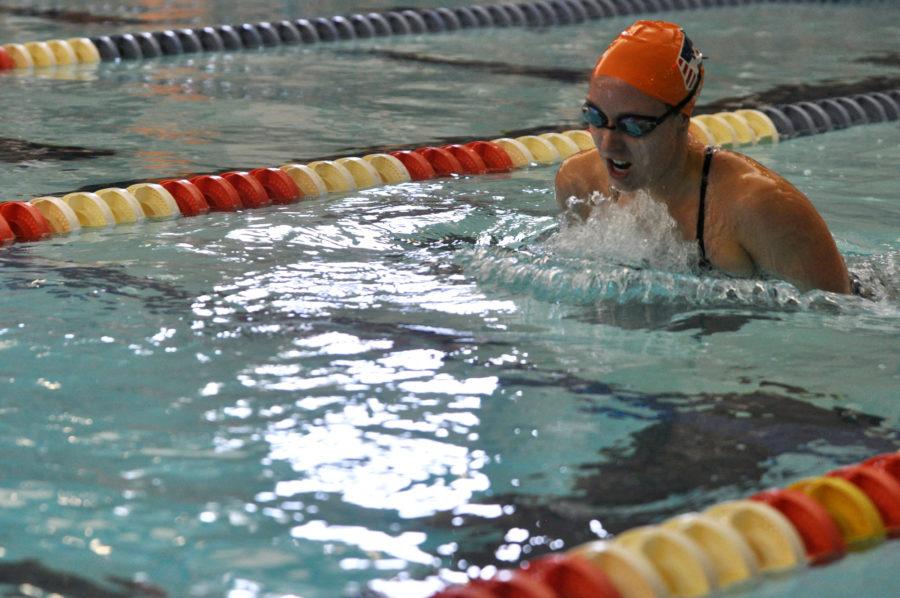 Stephanie Hein, senior, swims the breaststroke in the 400 yard IM at the Fighting Illini Dual Meet Spectacular in the ARC Pool on October 16, 2015.

Check out the Radio Preview by Brian Heidegger here

With only three weeks remaining until the Big Ten championships, the Illinois swimming and diving team will compete outside the conference for its last meet versus No. 24 Arkansas.ch

The Illini have not faced an opponent from the SEC since the 2005-2006 season, when the team fell to Kentucky, 179-119.ch The Illini finished at 4-5 that season, but with the team’s current 8-3 record, chIllinois is looking to prove that it can compete with teams from other major conferences, and not just the Big Ten.

Head coach Sue Novitsky chdidn’t have the SEC drought on her mind when she made the schedule. She felt the similarities between the programs allowed for a great opportunity for the Illini.

“It’s just the way it worked out,” Novitsky said. “Arkansas is also a women’s-only program, so sometimes it’s a little easier to get some meets because you don’t have to worry about traveling with the men’s team or anything like that. They reached out to us so we are taking advantage of it.”

Freshman Autumn Ledginch has a bit of SEC experience herself. Ledgin attended high school four hours away from one of the premier SEC swimming and diving schools — the University of Florida. She believes that there is no added pressure, and that the Big Ten can carry its weight against teams from any conference.

“A lot of the kids on my high school team went to SEC schools, and honestly it’s just another conference,” Ledgin said. “It’s a powerhouse like the Big Ten is so I don’t feel any added pressure.”

The Illini face a rough test after coming off back-to-back conference defeats, both of which Novitsky said came down to the last second.

“They were very close meets, and fractions of a second and they could have gone either way,” Novitsky said. “Those are the types of meets we need to be in, so I’m not overly concerned with (getting a win) because that record doesn’t help us in the Big Ten Championships. It’s all about times, so we have to keep worrying about competing well, and handling those situations when it’s tough.”

For the Illini to improve to 9-3 on the season and knock off their first ranked opponent all season, the team will have to lean heavily on their star sophomore Samantha Stratford.ch

Leading the team in event victories this season, Stratford has been a key contributor to the Illini’s 8-3 record, and come Saturday, Stratford is prepared to treat the meet just like any other.

“I think our last meet went well, but we could have focused on smaller details, and that could have been the difference if we focus on those and not the outcome of each race,” Stratford said. “We go into the meet like it was any other meet, it’s just another team doesn’t matter if it’s SEC or Big Ten.”