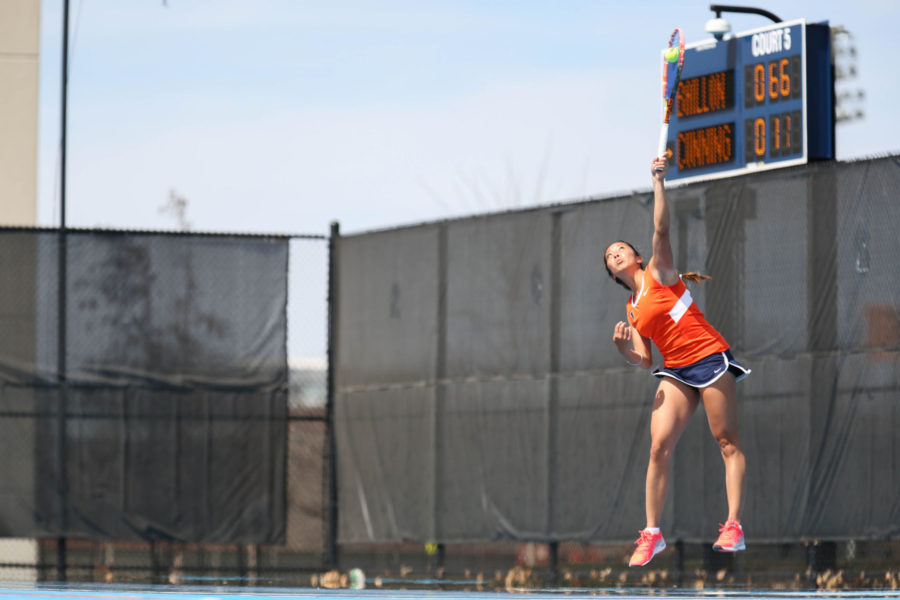 Illinois’ Louise Kwong serves the ball during the match against Rutgers at Atkins Tennis Center, on April 5.

The Illini women’s tennis team is 3-1 heading into this weekend’s trip to Notre Dame. The two teams face off Sunday afternoon at Eck Tennis Pavilion.

Illinois’ last competition was the ITA Kickoff tournament, and head coach Evan Clark’s team split its matches there. The Illini beat No. 30 Virginia Tech but lost to No. 17 Texas Tech. The most recent release of the ITA rankings has Illinois up to No. 53, moving up five spots from its prior ranking.

Some of the Illini have played against a few of the Fighting Irish before — Notre Dame visited Illinois’ Atkins Tennis Center for the Midwest Blast in early November.

“I think I was beating the girl (Notre Dame’s senior Quinn Gleason) I was playing, but I ended up losing,” junior Alexis Casati said. “I get another shot at her so that will be fun.”

In preparation for the weekend tilt, the Illini are trying to clean up their play.

“This week we are working on cutting down unforced errors and just becoming more aware of what’s going on on the court, and not just making dumb mistakes,” Vias said.

The Illini had no practice Monday and a light practice Tuesday because they were recovering from their weekend tournament. But they got back in the swing of things on Wednesday and didn’t change their schedule because of last weekend’s competition.

“We are not necessarily doing anything different,” Casati said. “We are doing a lot of running and lifting, and then taper off by Sunday.”

Notre Dame is 1-2 so far in the Spring, defeating Western Michigan but losing to both Arizona State and Oklahoma State 4-0. This will be the Irish’s third home match of the Spring at the Eck Tennis Pavilion. They are No. 33 in the most recent ITA rankings.

“We are going to get a little more work in training-wise and weight-wise,” Clark said. “We are just happy to be back home preparing and I think we got a great shot against Notre Dame come Sunday.”