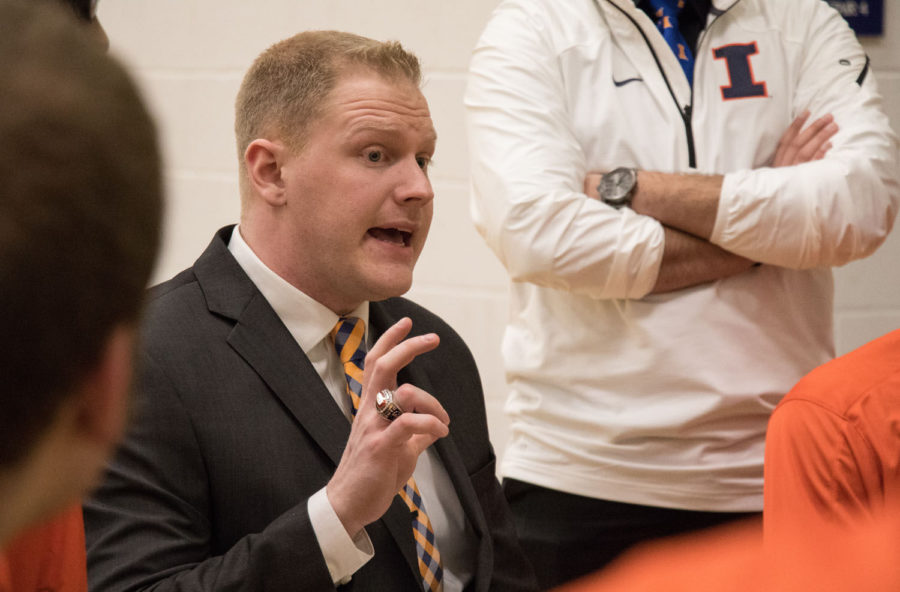 Illinois' head coach Matt Buchi talks with his players during a time-out at the wheelchair basketball game vs. Missouri at the ARC on Feb. 13.

Following a strong tournament at Wichita, the Illinois wheelchair basketball teams will travel to Auburn University to play in the Tigers’ first annual collegiate tournament.

Women’s head coach Stephanie Wheeler said that Auburn is a “newer program,” but that the tournament will feature some of the country’s best competition. They will have the opportunity to play each team at least once, and the Illini are excited for the challenge.

Both the men and women have plenty of experience against these teams, including some great results for the women.

“We’ve done a really good job in that we have actually won games against all of the toughest teams heading into the tournament,” Wheeler said. “It is nice to have that in the back of our minds, especially when we play in tougher tournaments like this one. We know we can beat anyone if we play our game.”

In its last tournament, the women’s team went 3-1 — picking up wins against Alabama, Wisconsin-Whitewater, and Texas-Arlington. Though the team has won in the past, it knows not to take the games lightly. Wheeler said she expects her team to embrace the challenge and hopes to compete hard in all of their games this weekend.

The size difference may be tough, but Wheeler thinks that her team will be able to handle it. She is looking for post player Kendra Zeeman to step up and have a big tournament, and hopefully combat some of the size of the other teams.

The men’s team will face an equally daunting challenge in its tournament this weekend.

“We are definitely going to have to play our best game if we want to succeed this weekend,” men’s head coach Matt Buchi said. “All season long we have competed well with these teams so we aren’t far off. If we play our game we can definitely string together some wins.”

In practice all week the team has focused heavily on its defensive game. Buchi said that the drills in practice were much harder than usual, and, after going through those, he is hoping the players can transfer what they have practiced into the game more easily.

The main change Buchi hopes to implement defensively is an uptick in physicality. He said that his team is smaller than a lot of other teams, so they have to match the tenacity and physicality of the opposition.

The men’s team is also glad to welcome back forward Michael Mitchell, who is playing in his first tournament of the year after breaking his femur at one of the early season practices. Buchi said that he has looked great all week, and that he is excited to see him in the games this weekend.