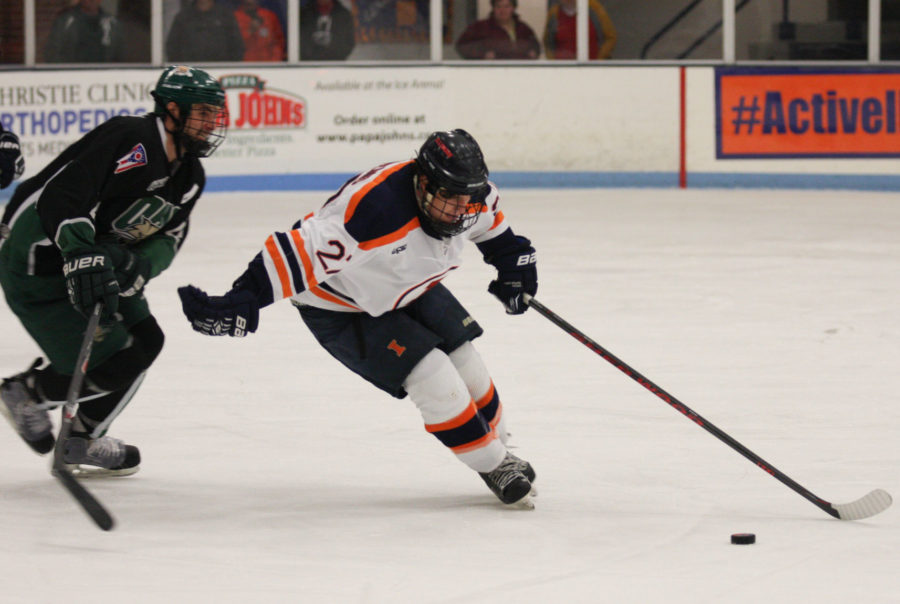 Illinois’ Kyle Varzino (27) tries to keep the puck away from Ohio during the Ohio hockey game at the Ice Arena on Oct. 24. The Illini had a pair of matches this weekend against Aurora.

The late chants of “overrated” from the Harassing Illini sealed it.

The Illinois men’s hockey team took down No. 1 Lindenwood 4-2 on Friday with possibly its best showing of the year.

Since the first puck drop, it was clear the game would be a battle for the entire 60 minutes. Each team struggled to gain control in the first period, as the Illini failed to convert on multiple fast-break chances and the Lions missed two opportunities in front of the Illinois net.

The Illini leaned heavily on the defense throughout the opening minutes as goalie Joe Olen and the back line got in a workout, taking in six shots on goal and many more open opportunities from the Lions.

Lindenwood began the second period by setting their tempo and scoring four minutes in to go up 1-0 on the Illini, but Illinois responded later in the period with a goal from senior captain John Olen – his second in as many games – to tie it at one.

From there on the Illini seized control of the period, putting pressure on the Lindenwood defense, until senior forward Kyle Varzino netted his second goal of the year to put the Illini ahead going into the third.

The goal was Varzino’s first since a September matchup with Oklahoma, and head coach Nick Fabbrini was happy to see production out of other players.

“It’s huge anytime you can get scoring from our third and fourth lines; it makes a huge difference,” Fabbrini said. “It was Kyle’s (Varzino) first goal in a long time. I don’t know if it’s a relief for him, but I think it’s great for us that we’ve got different guys heating up at this time in the season.”

Heading into the third, the Illini held a 2-1 lead and it lasted until a power play goal from the Lions with 7:10 left to play. However, Illinois responded two minutes later with a fast-break goal from sophomore Eric Cruickshank to regain the lead at 3-2.

The final few minutes were anything but easy for the Illini defense as the Lions continuously fired shots on goal, but Olen shut the door on the Lions, and a late empty-net goal from Varzino sealed the win for Illinois 4-2.

Fabbrini was especially happy with Olen’s play in the net and said that he was the main key in the night’s win, along with his defense.

“He was outstanding, and he gives us a chance to win every game that he plays in,” Fabbrini said. “The guys did a great job selling out in front of him blocking shots and keeping a lot of their shots to the outside.”

Varzino’s two goals sparked the Illini’s victory but he said the turning point was in the second period.

“It was a close game and they’re a great team so we decided we just had to get it going,” Varzino said. “That’s just how we beat them tonight.”

The loss was the Lion’s first in six games and extended the Illini win streak to four – their longest on the season.

“They are going to be better and they’re going to make adjustments and come out hard,” Fabbrini said. “It’s going to be up to us to make sure that we have the better effort.”