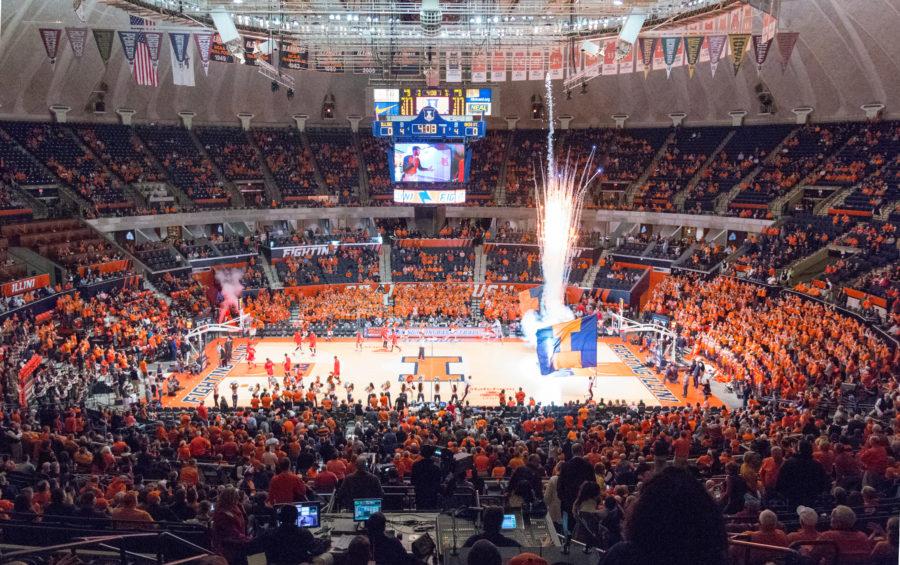 Fireworks shoot into the air inside State Farm Center just before the Illinois men’s basketball team takes the court to face Ohio State on Thursday, Jan. 28.

I remember that phrase popping into my head minutes after Illinois convincingly lost its first game of this season to North Florida in mid-November.

Word spread around the press room at Springfield’s Prairie Capital Convention Center that defending national unner-up Wisconsin had just fallen in its home opener to Western Illinois, and Illini fans were taking solace on Twitter that at least their season-debut loss wasn’t the Big Ten’s crowning embarrassment that evening.

While Wisconsin is coming off back-to-back Final Fours and a run of success that includes 17 straight NCAA tournament appearances, Illinois basketball has been in a gradual decline since 2005. Even though Illinois didn’t have as far to fall as Wisconsin this year, those Opening Night disasters still conveyed loud and clear the same message to both teams’ fans: This season could be especially bad.

Illini and ‘Sconnie fans have already seen their teams lose more games by late January than they usually have by the beginning of March, and they’ll watch them battle Sunday evening in Wisconsin’s first visit to State Farm Center since 2014. Illinois (10-11, 2-6 Big Ten) is looking for its first win against the Badgers (12-9, 4-4) since 2011.

Sunday’s matchup should serve as extra motivation for Illinois head coach John Groce, who is 0-5 against Wisconsin and has lost by an average of 17 points in those five games. On the other end of those lopsided decisions was Badgers head coach Bo Ryan, who retired earlier this season and handed the team to longtime assistant and current interim head coach Gred Gard.

Groce will never get a chance to turn the tables on Ryan, but he has to be determined to finally beat the only Big Ten team he hasn’t defeated in three-plus years at Illinois.

In the context of a single season, a lack of success against a particular team doesn’t always mean much. Some schools simply present bad matchups for others, and Wisconsin has had really good teams the last three years.

But the utter domination Wisconsin has displayed recently over three completely different Illini squads was unsettling and something Groce can’t allow to happen if he hopes to establish a consistently successful Big Ten program going forward. He has as good a chance as any Sunday to reverse that trend against the weakest Badger team in years.

Despite losing head-scratchers to Green Bay and Milwaukee at home, Wisconsin has responded nicely with upsets over No. 4 Michigan State and, in its last game, over No. 19 Indiana. The Badgers have been competitive in all four of their conference losses as well, falling by an average of just 3.8 points.

It’s still a down season by Wisconsin standards, and there’s a good chance that nearly two-decade long NCAA tourney streak will come to an end. But Gard has enough pieces to challenge any Big Ten opponent, meaning the Badgers have little reason to fear the Illini Sunday.

Nigel Hayes and Bronson Koenig are the main holdovers from last season’s 36-win team, and both juniors have carried Wisconsin to this point. The 6-foot-8 Hayes is averaging 17 points per game and could have a big night against Illinois’ thin interior, but it’s the Badgers’ freshman post presence who might frustrate Illini fans even more.

Ethan Happ is a 6-foot-9 forward from the Quad Cities area in Milan, Illinois, and is averaging 12.6 points and 8.2 rebounds in his freshman season. Much like Frank Kaminsky, Happ is an under-the-radar in-state big who the Badgers plucked from under the rest of the Big Ten’s noses, and Happ is already ahead of Kaminsky in terms of first-year production.

Happ won’t stretch the floor like Kaminsky, but he will leave Illinois fans in continued awe of Wisconsin’s ability to identify and develop overlooked Midwest talent.

The Badgers are coming off three straight wins, while the Illini have lost six of eight and dropped a draining overtime affair against Ohio State Thursday. As we saw again against the Buckeyes, it’s very difficult for Illinois to win if both Kendrick Nunn and Malcolm Hill aren’t playing at a high level.

If those two don’t bring it Sunday, it will be tough for Groce to get out from under Wisconsin’s boot, which has crushed him to this point. Of course, that player-coach dynamic goes both ways.

It’s his job to put his stars and their supporting cast in the best position to win.