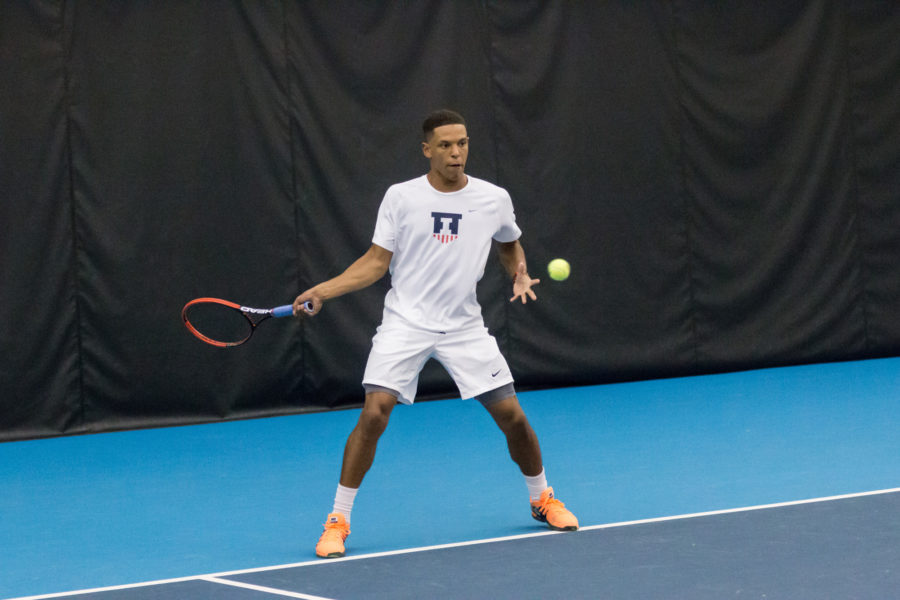 Illinois’ Julian Childers swings for the ball during the match against Valparaiso at the Atkins Tennis Center on Friday, January 22, 2016. Illinois won 4-0.

The Illinois men’s tennis team went up against some stiff competition over the weekend.

The Illini first traveled to Durham, North Carolina, to take on the No. 24 Duke Blue Devils.ss Duke entered the match with many talented underclassmen, including sophomore Nicolas Alvarez, who is ranked No. 12 in the ITA player rankings.ss

The duo of Alvarez and freshman Vincent Lin downed the pair of senior Jared Hiltzik and junior Alex Jesse, 6-4. ssThe Illini came back strong, as the doubles teams of sophomores Aleks Vukic and Aron Hiltzik, and redshirt junior Julian Childers and senior Brian Page cruised to victories for the first Illinois point of the night.ss

In singles, Duke notched up the score at one when Lin knocked off Childers at No.4 singlesss. The Illini responded, taking two matches at No. 1 and No. 5 singles.ss

Duke came right back, tying the score at three with wins at No. 3 and No. 6 singles.ss The matchup came down to No. 2 singles with the matchup of Vukic and T.J. Pura. After Vukic took the first set 6-2, Pura came back and took the second set 6-4. After an early break, Vukic closed out Pura to secure the 4-3 match victory for the Illini.ss

The team then traveled to Chapel Hill, North Carolina, to take on the North Carolina Tar Heels. The duo of Jesse and Jared lost to the No. 1 doubles team in the country (Robert Kelly and Brett Clark) 6-4ss. Illinois responded with a doubles match victory from freshman Pengxuan Jiang and Childers.ss

The match was the first regular season match of Jiang’s career. North Carolina eventually garnered a doubles point with 7-6 (3) victory over Aron and Vukic.ss

The No. 10 Tar Heels came away with three straight victories in singles at Nos. 3, 4 and 5 singles, ultimately defeating the Illini 4-0ss. Head coach Brad Dancer noted that North Carolina is a talented team and was proud of the way his team competed, even though the result was not what the team had wanted.

“It’s never easy going on the road facing a tough opponent,” Dancer said. “North Carolina is a talented squad, we just couldn’t capitalize on some opportunities we had.”

According to Dancer, there are a few improvements he would like to see his team make going forward through the rest of the season.

“Our serving in doubles could have been a lot better,” Dancer said. “It was a tale of two days. Our guys fought hard; I have to give them a lot of credit. There were some points we would have liked to capitalize on, but they really showed some great effort.”

Dancer wanted to put the North Carolina match behind them and prepare for Illinois’ next matchup against the Notre Dame Fighting Irish. The Illini defeated the Fighting Irish 4-0 in their previous matchup.