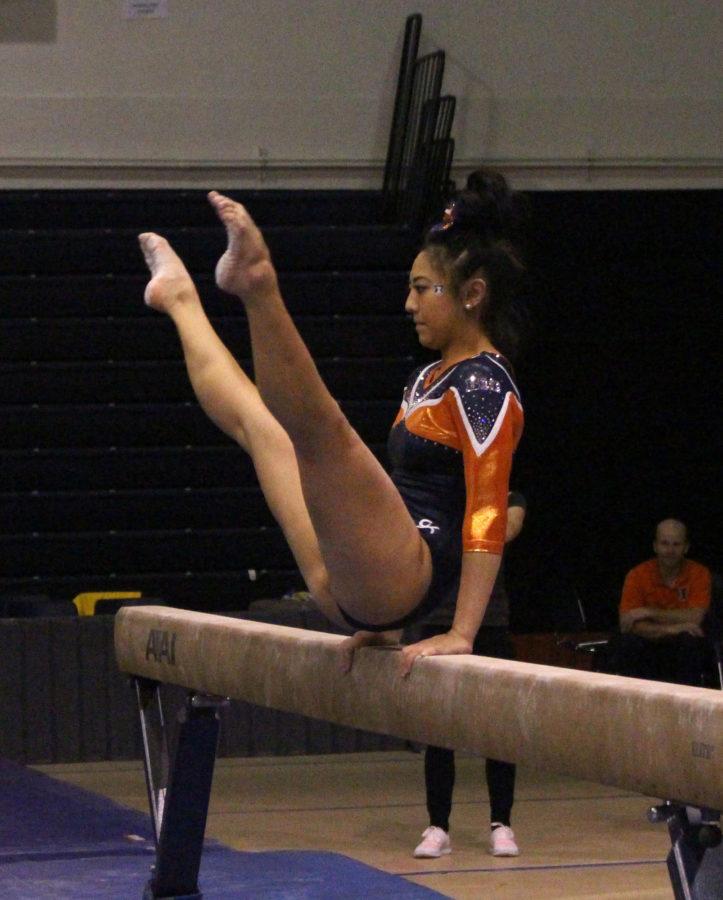 The No. 19 Illinois women’s gymnastics meet against Penn State on Friday night in State College, Pennsylvania, was settled by less than one point.ss

Illinois (2-2, 2-1 Big Ten)ss started out this Big Ten matchup competing on the uneven bars. Junior Mary Jane Horth performed her third 9.900 routine of the season, leading Illinois in the event and sharing the event title with Penn State (0-3, 0-2 Big Ten).ss The team’s 48.625 start on the bars set them back early in the competition.ss

“It was a very disappointing start to the meet,” said head coach Kim Landrus. “This team can be very good on bars, but they have to do it when it counts.”

Illinois competed on vault in the second rotation, scoring a 48.675 team totalss. Senior Giana O’Connor led Illinois with a 9.825ss, placing her second on vault. Penn State posting a score of 48.925 to bury Illinois further behind them.ss

Illinois stepped it up in the third rotation to bring them back into the meet. The gymnasts racked up a total of 49.225ss on floor, a season high event score for the team. All of the routines scored 9.800 or higher, with junior Erin Buchanan and freshman Lizzy LeDuc leading Illinois with a score of 9.875.ss

Going into the fourth rotation, Illinois was behind Penn State by a mere .675 points.ss

On the beam, Illinois performed well enough to jump ahead of Penn State. Scoring a event score of 49.200ss, the Illini set their second season high event score of the night. LeDuc and senior Sunny Kato shared the event title with a score of 9.900 — LeDuc’s first event title of her Illinois career.ss

“We rebounded in the second half and had two season high event scores,” Landrus said.

Illinois overcame the point deficit to beat Penn State 195.725-195.025, both teams setting season high scores. Along with the shared event title on bars, Horth earned her first all-around title of the season with her season-best performance of a 39.400.

“It’s early in the season, but as we get further along, the performance tonight will not be enough,” Landrus said. “We have to be strong on four events to compete well in the Big Ten and nationally.”