Illini wrestling bounces back with win over Wisconsin 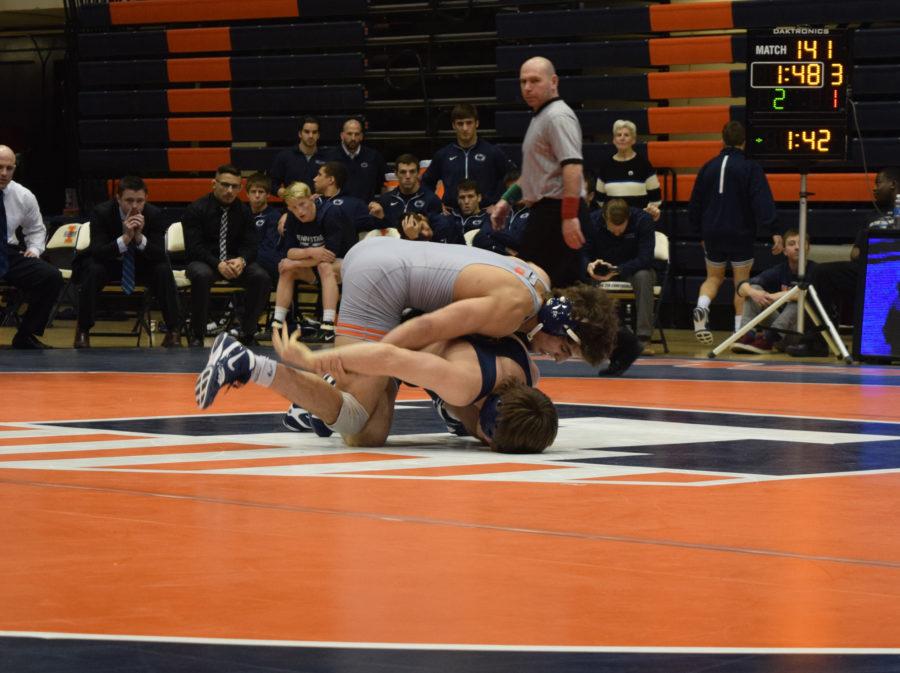 Coming off a sour defeat to the top-ranked Penn State Nittany Lions, the Illinois wrestling team had one full week to prepare for another tough opponent, Wisconsin.

The Illini found themselves in the hole early, trailing the Badgers 10-3 after the fourth match before finishing strong and winning five out of the final six matches.

At 157 pounds, No. 2 Isaiah Martinez bounced back from his first collegiate defeat with his 14th technical fall of the season over the Badgers’ T.J. Ruschell.

Martinez started his attacks early with two four-point near falls in the first period to propel the defending Big Ten and NCAA champion’s lead to a 10-0 cushion before finishing off Ruschell, 16-1.

Illini head coach Jim Heffernan said he continues to see a lot of progress out of his team, but still feels like there is work still to be done in order for his team to reach the level it’s trying to achieve.

“I thought we wrestled alright,” Heffernan said. “I can start to see some improvement in what we are trying to do but still not enough consistency across the board.”

No. 3 Isaac Jordan defeated sixth-ranked Steven Rodrigues of the Illini, 5-2, at 165 pounds. The win pushed Jordan’s record to 18-0.

Two escapes in the match proved to be not enough for Rodrigues against Jordan’s attacks, as Jordan used two takedowns to earn the decision victory.

Jordan’s win was the only win for a ranked Badger on the afternoon.

Zane Richards showed why he is one of the best at 133-pounds, as well, with a win over another top-ten opponent, in No. 7 Ryan Taylor.

After losing to Taylor at last season’s dual, Richards came out strong with an early 3-1 lead after the conclusion of the second period.

At 174-pounds, the Illini received a major contribution from No.4 Zac Brunson, as he defeated the Badgers’ Seth Liegel by major decision, 13-2.

Coming off his first defeat of the season to Penn State’s Bo Nickal, Brunson looked to maintain his focus going into his match against Liegel.

“I wanted to make sure that I stayed focus for this match and to make sure I didn’t get caught up worrying about match that had already happened,” Brunson said. “My match today was a great chance to bounce back from last week’s loss and allowed me the chance to correct my mistakes from my previous match.”

Just like Martinez, Brunson came out of the gates strong as well, with a takedown and four-point near fall during the first period before defeating Liegel finishing off Liegel in the third period.

After seven straight losses, the Illini picked up a much-needed win at 197 pounds from Andre Lee.

At 0-5 in Big Ten conference matches, Lee picked up his first win of Big Ten play over Wisconsin’s Eric Peissig by decision, 7-2.

Lee started off quickly as well, with a takedown within the first minute of the match and led after the first period, 4-2.dsdd

Heffernan said that he enjoys how Lee continues to learn from everything and continues to get better in the process.

“Andre’s good when he is in the offensive,” Heffernan said. “He has a lot of different ways to score and he is figuring things out and more importantly, he keeps working on his wrestling every day.”