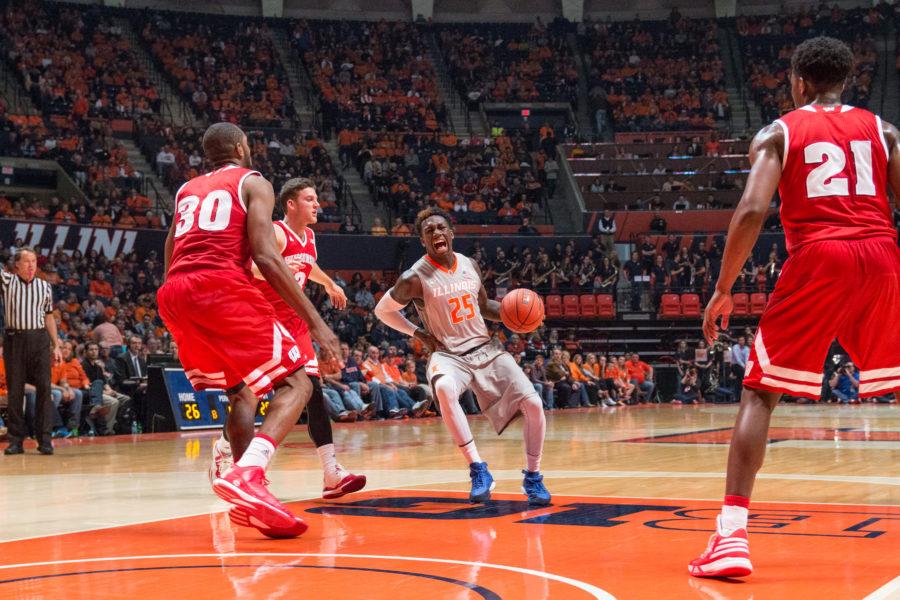 Illinois’ Kendrick Nunn shouting in pain and grabbing his hip during the Illini’s 63-55 loss to Wisconsin. Nunn suffered a hip contusion but checked back into the game shortly after.

A group of 30 or so Wisconsin students traveled from Madison to Champaign on Sunday to watch their Badgers take on the Illini. The contingent of fans, known as the “Grateful Red,” pestered the home team from the upper deck for all 40 minutes of game time.

With Illinois at the free throw line in the first half, one Badger fan stood up and bellowed, “You will not make this shot!”

The straightforward, dry-humor approach didn’t work for the heckler in that particular instance – the shot went in – but the statement was indicative of the rest of the game for the Illini. Illinois shot just 18-for-50 from the field (36 percent), and John Groce’s squad dropped its fourth game of its last five outings.

The Badgers rank fifth in the Big Ten in per-game points allowed, and they locked everybody up Sunday besides junior guards Malcolm Hill —22 points — and Kendrick Nunn — 15 points. Jalen Coleman-Lands, Khalid Lewis, Michael Finke and Maverick Morgan shot a combined 4-for-19 from the floor.

Similar to Thursday’s Ohio State game, the Illini jumped out to an early lead only to let their opponent creep back and ultimately take full control. Illinois settled for less-than-ideal looks early in the shot clock. When the Illini did get a decent look, they botched the opportunity more often than not.

“We just did not finish two-point field goals well,” Groce said. “It wasn’t necessarily just one guy. Ken struggled in the two-point area, Maverick struggled a couple times when he caught the ball down there – they took the ball from him a couple times. Finke had a possession in the first half where he had two or three right at the rim, and Khalid (missed) two or three layups.”

Wisconsin’s offense wasn’t much better. The Badgers shot 2-for-14 from three-point land, and they failed to reach the charity stripe until the second half. They missed 13 of 19 shots in the second half but managed to snag their fourth straight victory.

The Illini still can’t seem to shake the injury bug, which has plagued the team since the off-season. Nunn suffered a hip contusion early in the second half, but he quickly checked back in. With 6:59 left in the second half, Finke exited the game with a knee contusion and wouldn’t return. Groce said Finke will undergo an MRI on Monday.

“I’m always worried about those guys,” Groce said. “We’ve been through a lot with that stuff. I’d be lying to you if I told you otherwise. Whether it’s mumps, or fingers, or thumbs, or knees or meniscuses.”

“I learned a long time ago – you’d be surprised at the resiliency of 18 to 22-year-olds,” Groce said.