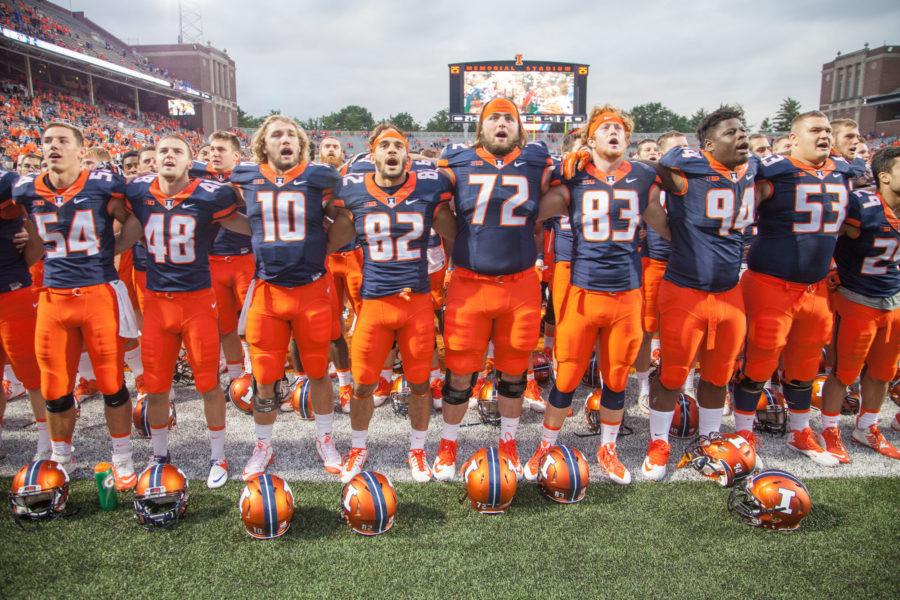 John Holecek fulfilled a lifelong dream when he committed to play football at the University of Illinois in 1991.

Now an IHSA championship coach at Loyola Academy, he turned his dream of playing college football into a pair of All-Big Ten seasons and an eight-year NFL career.

The members of the Class of 2016 will sign their letters of intent on Wednesday’s National Signing DayRB. They’ll try to follow in the footsteps of Holecek and countless others who’ve played college football.

Lost among the letters of intent are the names of those who won’t sign an official letter for academic reasons.

At least that’s what fans think. In the months leading up to Signing Day, recruits decommit from schools and on occasion, fans jump on academic standards as the reason for the unexplained switch.

“I think that’s overblown,” said Derek Leonard, head coach at Rochester High School. “I think people want you to think that. Maybe places like Northwestern and Duke, but I’ve never heard a kid get into Indiana and Purdue and not get into Nebraska.”

The NCAA has strict requirements for prospective student-athletes. Division I athletes must have taken 16 core classes in high school and must earn a minimum GPA in those classesRB.

That GPA is combined with either their SAT or ACT score on a sliding grade scale and must reach the guidelines set by each university for its prospective students. A sliding scale means that the higher the future student-athlete’s GPA, the lower his or her SAT or ACT score can be.

Although most prospective student-athletes must reach the requirements, there’s still hope for those who don’t enter through regular admissions at Illinois. Applicants recruited to participate in a varsity sport who weren’t admitted through the regular admissions process can be considered for admission by the Committee for the Admission of Student Athletes.

Potential student-athletes are evaluated by a committee of senior admissions officers from each of the undergraduate admitting schools to determine whether the recruit will be successful at the schoolRB.

“Student-athletes need to meet the same standards as every other incoming student. There are NCAA minimums that need to be met to be eligible, and Illinois actually has higher standards to be admitted,” said Kent Brown, associate director of athletics for media relations. “Each student is considered singularly. … The quality of incoming students at Illinois means that student-athletes have to meet standards that somewhat match the entire group.”

And while there are some loopholes, high school coaches don’t think academics is a determining factor between schools with similar academic standards, like Illinois and the University of Wisconsin.

According to both Holecek and Leonard, schools like Northwestern, Stanford and Duke have particularly high academic standards and are forced to reject students who can’t reach those standards, but the coaches haven’t experienced difficulties with other schools.

Holecek believes some prestigious schools — he cited Notre Dame — have lowered their expectations recently, but he still thinks that schools like Illinois manage to get recruits who meet the NCAA requirements.

“I think when you get to that large of an institution, you can hide some students in some classes, and you can get around, finding ways to graduate them,” Holecek said. “Now there are penalties if you don’t graduate them. That’s somewhere the NCAA has made improvements in the past 20 years.”

Holecek also said that recruiting was simpler when he went through the process. In 1991, there weren’t websites dedicated to recruiting, filled with stats, game film and anything else coaches and fans want to know about a high schooler.

“It’s changed a lot since I was in school and it’s night and day,” Holecek said. “Things are so much more accelerated now. … The offers come in quickly and they’re going to dry up because (schools) are not going to wait that long for you.”

The recruiting process can now begin as early as freshman and sophomore year. Although NCAA regulations prohibit coaches from calling or sending any written information about recruitment until July 1 before the recruit’s junior yearRB, recruits do receive school-specific summer camp information and NCAA questionnaires.

Recruits usually begin by sending a video of their game tape to interested schools. Today’s technology has made the creation of scouting videos easy with different features to show why that particular recruit stands out from the rest.

Websites like “Hudl” make it easy for recruits to distribute their film to dozens of coaches in hopes that their tape will impress the coaches enough for an offer.

Once the coaching staff is interested, the timeliness of the process depends on their team’s position needs. Coaches usually inform the recruit of where he would stand on the team’s depth chart were he to sign with the university.

The rest of the process depends on a few things: the recruit’s ranking, his interest in a school and the school’s interest in return. It can go any number of ways.

Technology isn’t the only part of the process that is different from Holecek’s day. High schoolers are forced to make quick decisions — schools often offer three athletes the same position to be safe and recruits must think quickly before another snaps the offer away.

By Wednesday, many schools will have much of their 2017 class already in place. While many recruits and families will be happy to know what the future holds before senior year, late-developing athletes will have a problem.

“There’s very little room for kids to grow into their bodies anymore,” Holecek said. “So if you’re a late developer, you’re going to have a problem.”

Because the recruiting process starts so early, schools make quick judgments as to which players will be ready to compete in the collegiate level and which will struggle. According to Holecek, this is the reason why schools like Boise State can compete with Power 5 schools. The Broncos coaching staff picks up on the mistakes that other schools have made and put together nationally relevant teams.

While fans might want to find excuses for why their favorite teams missed out on a top recruit, coaches emphasize that if the recruits want to play, they control their destiny.

“You better do whatever else everyone else does to win,” Leonard said. “They’re going to have success or not based on their work ethic.”