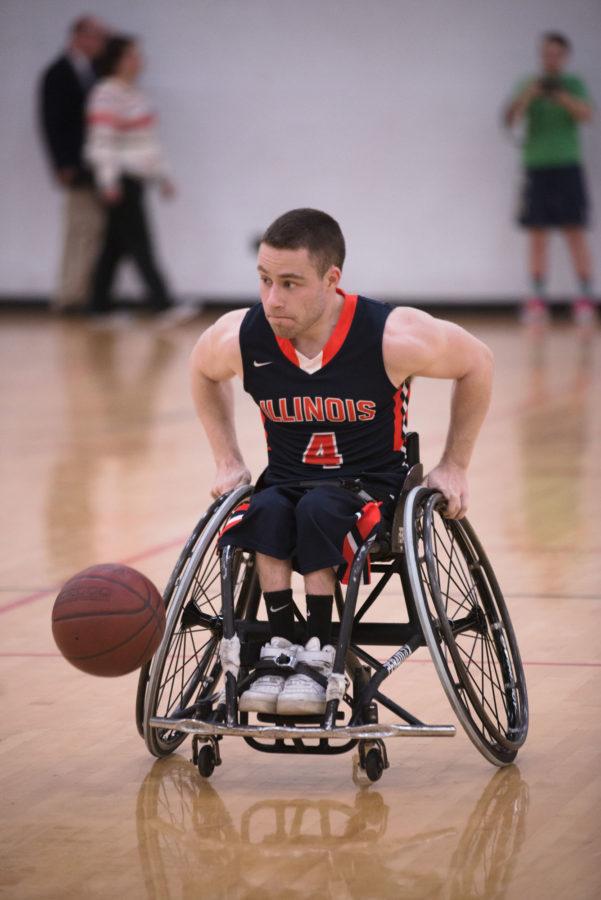 Illinois’ Ryan Neiswender drives the ball down the court during the game against Missouri at the Activities and Recreation Center on Friday, February 13, 2015.The Illini won 53-46.

In their second tournament back from break, the Illinois wheelchair basketball teams are starting to settle into their top form. The teams squared up against some of the toughest competition in the country and were able to get a good measure of where the team is going.

The women’s team went 3-1 on the weekend, playing against the University of Alabama, Wisconsin-Whitewater, and Texas Arlington twice. They were all familiar opponents for the Illini, who have already won games against each team.

In the first game of the weekend, the Illini played against defending national champion Alabama and came away with a 52-44 loss, their only loss of the trip. Kendra Zeman finished with 12 points and six rebounds, but Illinois’ frontcourt was no match for the Alabama forwards, who scored a total of 40 points.

Games two and three were both against UTA, which women’s head coach Stephanie Wheeler called “the toughest team we’ve played all season.”

In the weekend finale, the Illinois women picked up a 66-42 win over Wisconsin-Whitewater. Gaeng scored 22 points, seven rebounds and six assists, while Blunk had 15 points, five rebounds and five assists.

The men posted a 2-2 record over the weekend.

Illinois won their first game over Alabama, in a 51-49 nail-biter. Ryan Neiswender continued his strong offensive output with 17 points and 11 assists for a double-double.

In game two, the Illini lost against UTA 59-36. Turnovers were a big issue; The Blaze scored 15 points solely off of giveaways. Spencer Heslop had 13 points while Neiswender had 15.

The Illini’s third game came against UW-Whitewater, Illinois losing 66-51. One of the Whitewater Warhawks — Dylan Fishback — had a monster game, putting up 16 points, 16 assists, and nine rebounds. The Illini struggled, but Heslop had another solid game with 16 points, six rebounds, and two assists.

Finally, the Illini pulled out a win in their final game of the tournament against Auburn. Due to technical difficulties, there were no statistics recorded during the game.

The teams will each play in two more tournaments before heading off to nationals.