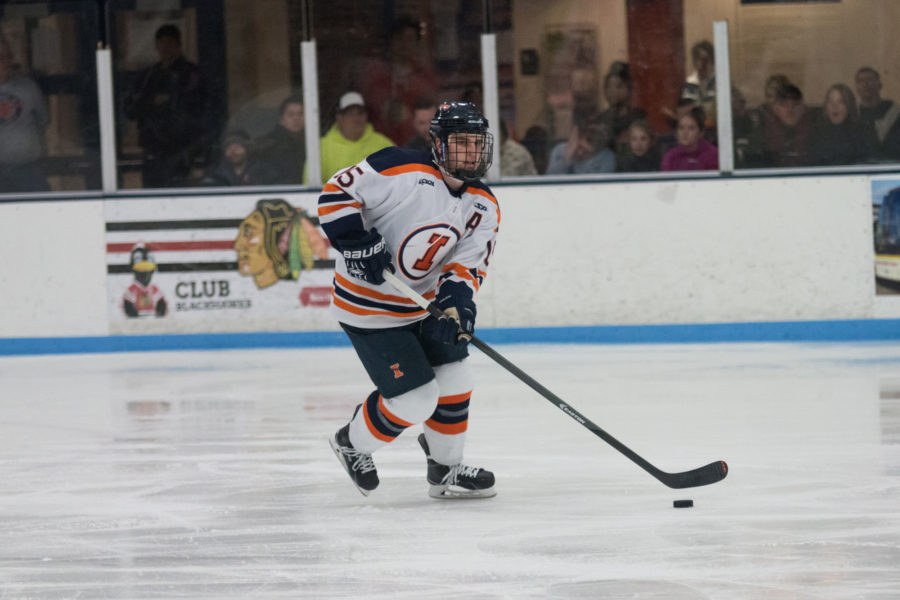 This weekend marks the Illini hockey team’s last two games of conference play before the CSCHL tournament Feb. 19 — setting the stage for a rematch with major league implications.

Only two points separate second through fourth place in the conference standings; Ohio sits at second with 19 points and Illinois ranks fourth with 17. With a series sweep this weekend, the Illini could finish as high as second and capture a first-round bye in the conference tournament.

“Winning the CSCHL championship is one of our goals, and that’d be a lot easier to do if we didn’t have to play that first day,” Head coach Nick Fabbrini said. “Every game you play is tough and it grinds you down, anyone who can avoid that first game has an advantage, quite frankly.”

Sweeping the Bobcats on the road is a tall order, not just for the Illini, but for any team this season.

Ohio is 18-2 at home and has scored 117 of its 157 total goals when skating on familiar ice. Last time the Bobcats took on the Illini — Oct. 24-25 at Illinois Ice Arena — Ohio managed to rattle off 92 shots on goal in two games.

“They’re a very deep team and they run a strict system,” sophomore forward Eric Cruickshank said. “Their coach tells them what he wants them to do and they run it very well — drive to the net hard and get pucks to the net. When you put up 40 shots a game, you’re going to score a couple.”

Nonetheless, Illinois has had considerable success against Ohio thus far.

The Illini split their first series with the Bobcats, shutting out their conference foe 2-0 in the first game and losing in a 3-2 shootout the following contest.

Illinois has had more recent success, as well.

Last weekend, the Illini faced CSCHL-leading Lindenwood University on the road and came away with a 4-2 win Friday. The following Saturday’s 4-1 loss was the first the Illini had suffered in the last five games – a winning streak that featured a sweep of Rochester College and a road win at No. 6 Iowa State.

However, the most reassuring thought for Fabbrini’s team is that this weekend it will face Ohio with a full roster, something that can’t be said about the teams’ October matchup.

Senior forward John Olen and sophomore defenseman Joseph Ritondale did not play in the last series against the Bobcats due to injury. Since the two have returned in late November, Cruickshank said the team’s scoring depth and defensive prowess has drastically improved.

“Having (Olen’s) leadership back on the ice is huge, he’s one of our best players,” Cruickshank said. “And (Ritondale) is big piece to defense. Going to play at their place, we need every guy in our lineup.”

With CSCHL-third place Iowa State playing last-place Robert Morris this weekend, the Illini will definitely need help getting that first-round bye. But both the coaches and players are happy they can give themselves an opportunity with their own sticks and skates this weekend.

“We know what we need to do…” Cruickshank said. “Guys are starting to realize there’s a certain way we have to play very every weekend to be successful.”