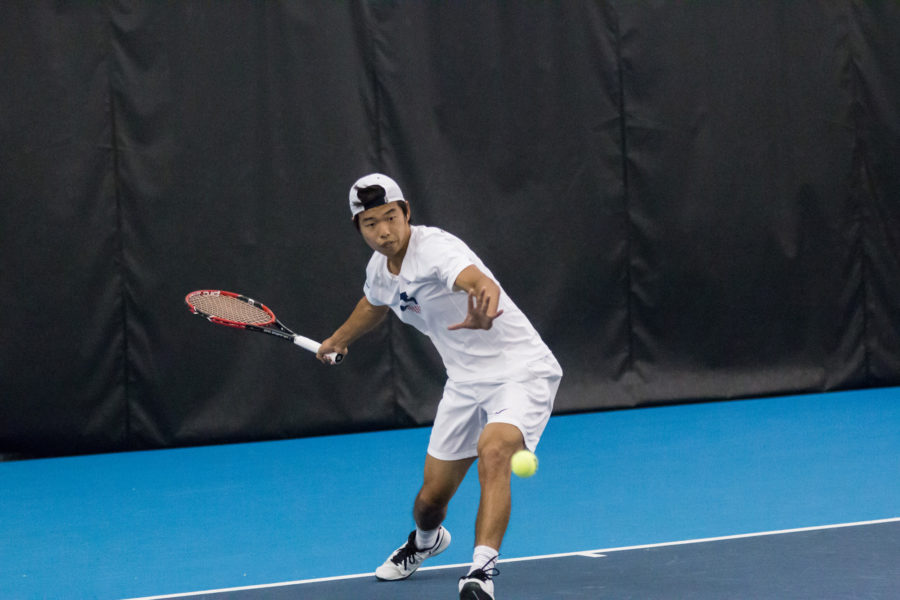 Illinois' Jiang Pengxuan swings for the ball during the match against Valparaiso at the Atkins Tennis Center on Friday, January 22, 2016. Illinois won 4-0.

The Illinois men’s tennis team defeated Notre Dame last month by a score of 4-0, earning the team its first victory of the spring season.

The Illini host the Fighting Irish on Friday — and head coach Brad Dancer’s players are preparing as if the first match never happened.

“Even though we beat them, it doesn’t mean anything,” senior Jared Hiltzik said. “We’re looking forward to them coming here, and we know they are going to put up a tough fight for us.”

Dancer mentioned that Notre Dame had a few injuries that withheld some of its players from competition during its previous matchup with Illinois, so he expects to see some different faces on the court.

“We know it is going to be a much-improved team from what we saw two weeks ago,” Dancer said. “I think they also had a lot of guys that had not played matches that are now getting their feet wet, so I think we expect this to be a much tougher match.”

Freshman and Chinese native Pengxuan Jiang made his first regular season appearance for the team against North Carolina and hopes to get another chance against the Irish. He partnered with junior Julian Childers and was excited to step onto the court for the first time this season.

Jiang lost both his doubles and singles matches.

“I tried my best, did whatever I could to win the match,” Jiang said. “I want to work on my serving in singles.”

According to Dancer, Jiang is not afraid of the spotlight and has an extra edge and comfort to him once match play begins.

“He loves playing for the team,” Dancer said. “There is a different look in his eye when it counts.”

The Illini split their two meets last weekend, defeating No. 24 Duke, 4-3, and falling to No. 10 North Carolina, 4-0. Hiltzik was satisfied with the team’s level of play but would’ve preferred to return to Champaign with two victories.

Dancer said his team has been working on its serving in doubles. He would have liked to have seen more consistency with ball placement on the serves to set up easier points for his squad.

The Illini took Sunday off and used Monday as a strength and conditioning day to recover from the two matches. They used Tuesday and Wednesday to work on drills and improve skills in doubles serving.

The No. 36 Fighting Irish are 2-3 and coming off a close loss to Northwestern. Illinois defeated Northwestern 4-0 earlier this season.