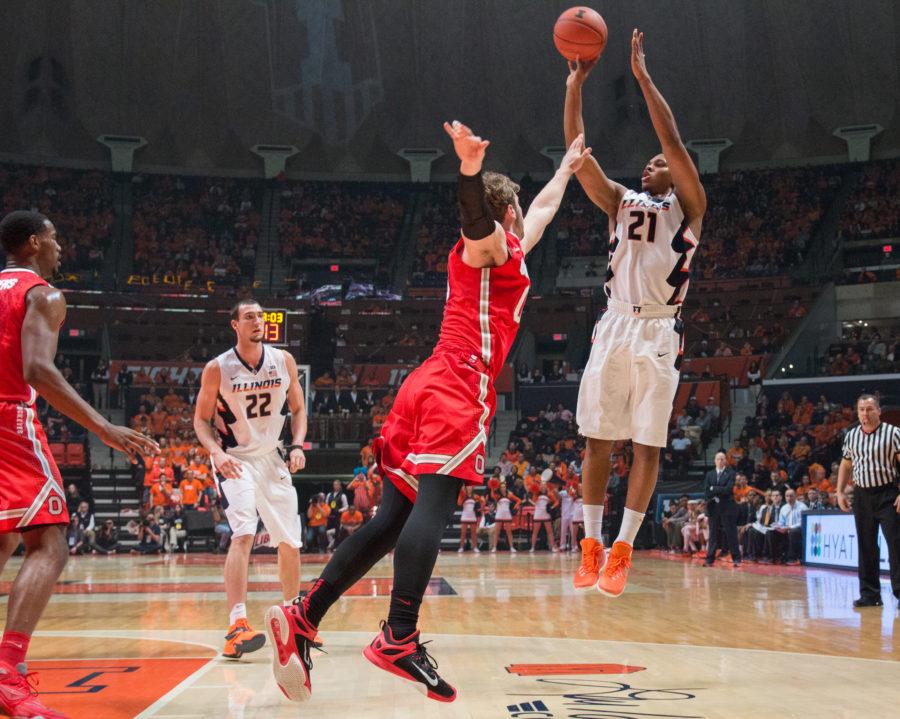 Malcolm Hill (21) rises up for jumper during Illinois’ 68-63 loss to Ohio State on Thursday, Jan. 28 at State Farm Center. Hill shot 3-for-14 and Illinois went 18-for-56 from the field in the overtime defeat.

Someone had to win Wednesday evening between Illinois and Rutgers, even if it looked for most of the game like neither team wanted to.

After coming within a free throw of defeat at the end of regulation and hemorrhaging away a seven-point lead with under a minute left in the first of three overtimes, Illinois escaped becoming Rutgers’ first Big Ten victim in 24 games with a 110-101, triple-overtime win.

Who would’ve thought one of the most memorable games of the year would come from two teams who entered Wednesday with a combined 2-16 Big Ten record?

It wasn’t always fun, it certainly wasn’t pretty and it won’t shake up the conference standings. But it was a legitimately bonkers affair that contained thrilling moments down the stretch, despite being played in front of a handful of people in a glorified high school gym in Piscataway.

Instead of trying to frantically sort through all the emotions this game unexpectedly produced, it’s probably easier to evaluate what this win means for Illinois (11-12, 3-7) if we the separate the positives and negatives that John Groce’s team showed against the now 6-17 Scarlet Knights.

First, the positives. Three Illini players had career nights, and all three figure to be major contributors heading into next season. The usual suspect Malcolm Hill delivered another Herculean effort, pouring in 32 points and grabbing 14 rebounds. The Illini turned to Hill down one with the game on the line at the end of regulation and he answered, converting a 16-foot pull-up with 10 seconds left to give his team a one-point lead that wouldn’t be enough to avoid overtime. Hill again proved that while Illinois is in an unfavorable position now, it’d be virtually nowhere without him.


– 18 of which came on 3-pointers. Illinois’ only healthy true big man Maverick Morgan posted a career-high 20 points as he dominated Rutgers offensively within 12 feet of the basket. The 6-foot-10 junior was extremely efficient, converting 10-of-13 shots in and around the post.

Fifteen minutes of extra playing time certainly helped boost everyone’s stats, but these performances were crucial regardless. Kendrick Nunn didn’t have his best game shooting for Illinois, but still recorded a double-double with 10 points and 13 rebounds. The most redeeming part about the Illini victory was that they pulled it off down three injured big men in Mike Thorne Jr., Leron Black and Michael Finke, while Nunn was noticeably hobbled with a sore hip. Credit Illinois for ultimately getting the job done on the road.

Now, for the negatives. The most glaring and obvious criticism you can lob at Illinois is that Rutgers is a terrible team. Wednesday’s loss dropped the Scarlet Knights to 0-10 in Big Ten play and winless in their last 24 conference contests, and despite the close result, still looked pretty awful against the Illini. Rutgers missed layups. It turned the ball over 19 times, often looking like a junior-high team. But Illinois still let the Scarlet Knights get to the rim with ease.

The Illini let two freshmen, Corey Sanders and Jonathan Laurent, absolutely torch them. Laurent put up 23 points and eight rebounds, while Sanders nearly recorded a triple-double with a ridiculous 39 points, eight rebounds and 12 assists. These guys are not all-Big Ten type players, but Illinois sure made them look like it.

It’s impossible to tally the negatives without noting that Illinois totally took its foot off the gas in the first overtime, allowing Rutgers to force two more extra periods. Up seven points with 25 seconds left, the Illini made an unbelievably stupid series of mistakes, including two fouls and two turnovers by Nunn and Hill that gift-wrapped another comeback for the Scarlet Knights.

Illini point guard Khalid Lewis had a chance to put the game away with a free throw, but missed to set up the moment that made an already insane game come completely unhinged.

Down 87-84, Sanders had an opportunity to tie the game and missed a 3-pointer. Continuing a common theme from all season, the Illini didn’t box Sanders out, and it cost them. Sanders snagged his own miss, retreated to the 3-point line and cashed a step-back three at the buzzer, pushing the game to a second overtime that eventually bled into a third.

Yes, Illinois pulled away in the third overtime and won. But the breakdown up seven points at the end of the first overtime should never happen against any team, and the Illini let it happened against one of the worst in the country. Yikes.

If you’re an Illinois fan, you’re certainly happy that you ended up on the right side of this one. But the game as a whole doesn’t tell you much that you didn’t already know. Illinois is still injured, still struggles to beat bad teams and still often looks lost on both ends of the floor.

If it seems like people — including the media — are being too harsh after a win, just imagine the reaction if the Illini had lost.