Illini fall to No. 22 Kentucky at home 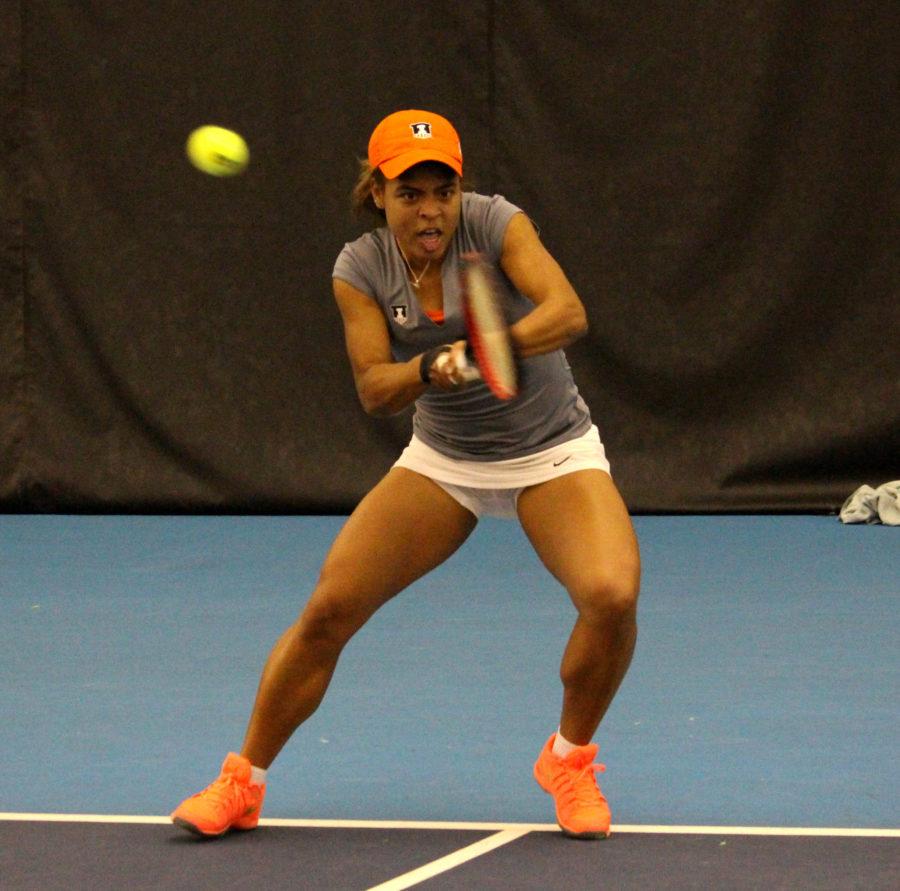 Jerricka Boone getting ready to send the ball back towards Kentucky in the singles matches at the Atkins Tennis Center on February 6, 2016. Kentucky won the match 7-0.

The Illini returned home to the Atkins Tennis Center for their Saturday matchup, where they took on the No. 22 Kentucky Wildcats.

The matchup marked the beginning of the Illini’s long February homestand. The 4-1 Wildcats bested the Illini, defeating them 7-0. The Illini are now 3-3 on the Spring season.

Kentucky started strong out of the gates, taking two out of three in the doubles matchups, and coming away with a 1-0 lead to start. Ines Vias and Louise Kwong did not finish their match, but were losing 4-5 to No. 1 ranked doubles pairing of Mami Adachi and Aldila Sutjiadi, who were surging back from an early 4-3 deficit to Kwong and Vias.

“They were very aggressive in doubles, they moved a lot at the net and we can learn from them,” head coach Evan Clark said. “They just did a good job at taking control of points early on, with their angles and using their weapons that really really hurt us.”

The doubles loss was Illinois’ first of the season.

In singles play, Kentucky had the upper hand. Kwong, Baillon, Vias and Pedraza Novak were all defeated in straight sets. Pedraza Novak took on Adachi, who came into the contest ranked No. 100 overall nationally. Kwong and Baillon both jumped out to strong starts in the first set, but saw their leads diminish from the quality play of Mikulskyte and Kirsten Lewis, respectively.

“At one time we had three three setters that could’ve gone either way. We were right in there but credit to Kentucky. Up and down the lineup, they are very good, but we will learn from it,” Clark said.

Clark submitted that the scoreboard wasn’t reflective of how close the match was overall. Vias was close to taking her match to three sets, just falling in the second set 5-7. Casati and Boone both went three sets, but ended up losing. Casati fell to No. 97 Sutjiadi 1-6, 6-3, 4-6 while Boone lost to Ravita 6-3, 4-6, 4-6.

The Illini are looking to continue to build on their play and prepare for a homestand that has them slated to play every match in February at the Atkins Tennis Center.

“We are going to keep working on trying to make adjustments quicker. I don’t think we did a great job today at making adjustments quickly and that’s kind of the biggest thing that’s holding us back,” Clark said. “We got to understand when something’s going wrong and make the fix quickly. That just comes with more match play which obviously we are getting.”

Clark will also have his team continue to work on fitness with conditioning and weights in preparation for its home matchup against unranked South Florida.

“We are just going to keep building up and make sure we are strong for Saturday,” Clark said.