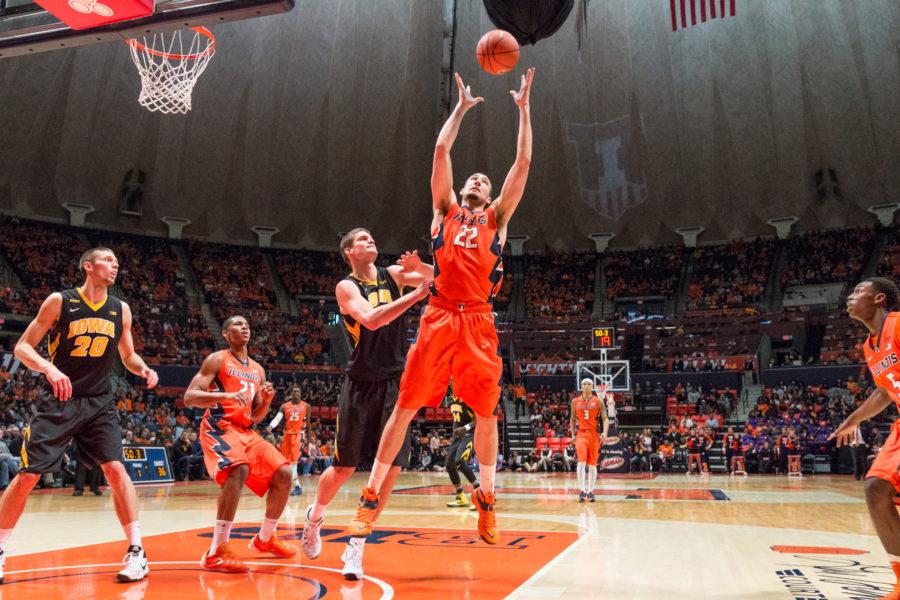 Illini center Maverick Morgan grabs a rebound during the Illini’s 77-65 loss to Iowa on Sunday, Feb. 7 at State Farm Center.

Illinois missed a combination of six layups and inside looks in the first ten minutes of Sunday’s game against No. 5 Iowa, setting the tone for the Hawkeyes’ eventual 77-65 dismantling of the Illini. In a game where Illinois needed to play nearly perfect to pull the upset, its execution wasn’t up to par.

“I thought they imposed their will, physically and mentally, more than we did today,” Illinois head coach John Groce said after the game.

The fifth-ranked team in the country did what it was supposed to do Sunday against an inferior opponent. As the Hawkeyes (19-4, 10-1 Big Ten) methodically trampled the Illini (11-13, 3-8) into the State Farm Center floor, it was evident why they’re having one of the best seasons in program history.

Iowa head coach Fran McCaffery has assembled a juggernaut in his sixth season, rolling out a roster that never seems to run out of meaningful contributors. Senior Jared Uthoff (18 points Sunday) is the clear-cut star, but the Hawkeyes are stacked with talent behind him.

“Look at this group, they all played as freshmen,” McCaffery said after the game. “So we’ve kind of had a continuation of experienced players.”

The Hawkeyes’ veteran poise was on full display against the Illini. Illinois opened the first half by whittling its deficit to six points and threatened to climb within striking distance sporadically the rest of the game, but Iowa was unwavering. Gesell and Jok hit several crowd-silencing jumpers and when they missed, Woodbury always seemed to be there for an offensive rebound and putback. Iowa scored 26 second-chance points on the afternoon.

On the defensive end, Iowa’s length was suffocating on the perimeter. Two-point buckets were hard for Illinois to come by and nearly non-existent in the first half. The Illini made just 5-of-19 2-pointers in the first period and shot just 39 percent for the game. That’s not even close to good enough to beat a top-tier Big Ten team.

Illinois’ leading scorer Malcolm Hill had a nice game with 14 points, eight rebounds and four assists, but his partner in crime Kendrick Nunn couldn’t keep up. Nunn recorded just six points, shooting an abysmal 2-for-13 from the field. If both those guys aren’t playing at an elite level, it’s simply very hard for Illinois to beat anybody.

There were bright spots for the Illini in defeat, and that’s what you have to look for in the midst of such a slog of a season. Redshirt freshman forward Michael Finke returned to the lineup after missing one game with a leg injury, scoring five points in 17 minutes. Fellow big man Maverick Morgan continued his junior-year emergence as a legitimate Big Ten center, scoring 10 points and pulling down 7 rebounds against the Hawkeyes.

Most encouraging for Groce and fans were the contributions of two true freshmen Sunday in Jalen Coleman-Lands and D.J. Williams. Coleman-Lands has had a hell of a freshman season for Illinois up to this point, and he’s taken his game up a notch recently. The 6-foot-3 shooting guard followed up a career-high 26-point performance Wednesday against Rutgers with 17 points on five 3-pointers. His game is pretty one-dimensional right now as a perimeter threat, but he’s been a deadly marksman as a freshman. When he adds some strength and tightens his handles, watch out.

Williams has been invisible for most of the season, buried on the bench by inconsistency and raw inexperience. Sunday he showed flashes of progression and potential in a second-half burst of eight points and four rebounds. It was by far the best game of Williams’ young career, who used his athleticism to be active on the glass and slash to the rim.

But as Groce pointed out after the game, his primary focus isn’t on the future and what kind of players his freshmen might blossom into. He’s worried about now, and the reality right now is that Illinois is a conference punching bag. Injuries have decimated this team, but as Groce said Sunday, there are other controllable factors that the Illini leave underutilized.

“We need to be a lot more resilient, a lot more mentally tough,” Groce said.

No one can control the injuries, but it would be nice to see Illinois make games more competitive from start to finish.