Playing like there’s nothing to lose Sunday can help Illini upset No. 5 Iowa 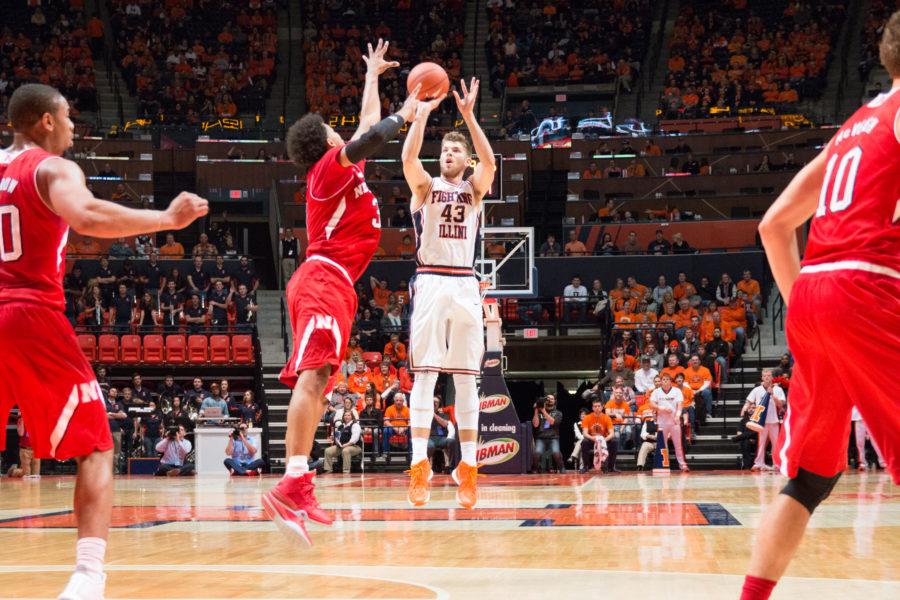 Illinois’ Michael Finke shoots a 3-pointer over Nebraska’s Shavon Shields during the Illini’s 78-67 loss to the Huskers at State Farm Center on Saturday.

Tweet: Illinois will have to mirror its best performance of the season Sunday to beat Iowa, writes @aroux94

The No. 5 Iowa Hawkeyes are set to visit State Farm Center on Sunday, and they might be underrated.

No matter the number next to the name, there’s no denying that the Hawkeyes have a powerful team in Fran McCaffery’s sixth season in charge in Iowa City. They’re deep, they’re talented, and unfortunately for the home team Sunday, they match up extra-favorably with the Illini.

Just like the Denver Broncos aren’t expected to de-throne Cam Newton and the Panthers in Sunday night’s Super Bowl, there aren’t many people out there predicting an Illinois upset. Unlike the Broncos, the Illini don’t have a stifling defense to counter Iowa’s offensive assault.

It had to feel good for Illinois’ players to escape Rutgers with a triple-overtime win Wednesday night, but Iowa will wipe the floor with the Illini if they play like they did against the Scarlet Knights. The Hawkeyes’ only conference loss was a close one against a stacked Maryland team, and they’ve already beaten Michigan State and Purdue twice apiece.

Illinois head coach John Groce’s first priority will be figuring out how to limit Jarrod Uthoff, who has been playing out of his mind in his senior season with the Hawkeyes.

Uthoff is averaging 18.4 points and 6.2 rebounds per game and is a legit National Player of the Year candidate. Unfortunately for Iowa’s opponents, the Hawkeyes roster is deep enough to withstand an off-game from their best player.

Peter Jok, Anthony Clemmons, Adam Woodbury and Mike Gesell have all played alongside Uthoff for at least two previous seasons, and all have been major contributors in Iowa’s recent rise to the top of the Big Ten.

This year is exactly what McCaffery has been building toward, and his team’s combination of development, continuity and talent is paying off. The Illini’s struggles in those three areas are why they’re currently jostling for position in the bottom of the conference standings.

Illinois’ ridiculous spate of injuries has been the biggest hindrance to the continuity aspect this season. Malcolm Hill’s name has been the only one Groce could safely pencil into the starting lineup game after game, and Kendrick Nunn and Michael Finke — two of the Illini’s strongest scoring threats behind Hill — have been hobbled in the past week as well.

Nunn should take the floor again after grinding through 45 minutes against Rutgers, and Groce said Saturday that Finke might also be available by game time. Mike Thorne Jr. and Leron Black are still out with meniscus injuries.

Groce stressed that his team will have to minimize mistakes to beat the Hawkeyes Sunday, which is definitely accurate. But to match the level that Iowa is playing at, Illinois has to be more than precise on both ends of the floor.

Iowa’s offense moves the ball like clockwork, and the Illini will have to disrupt that flow to drag the Hawkeyes into a road trap Sunday. On the offensive side, Illinois has to shoot above its season average of 43 percent. A performance approaching the 54 percent mark the Illini set in their January upset of No. 20 Purdue might be enough to vanquish Iowa. A performance mirroring the 36 percent shooting effort Illinois turned in against Wisconsin in its last home game won’t get it done.

At least Illini fans can take solace in a trend that is more likely to be magnified when playing at home: Often teams play best when there isn’t much left to lose.