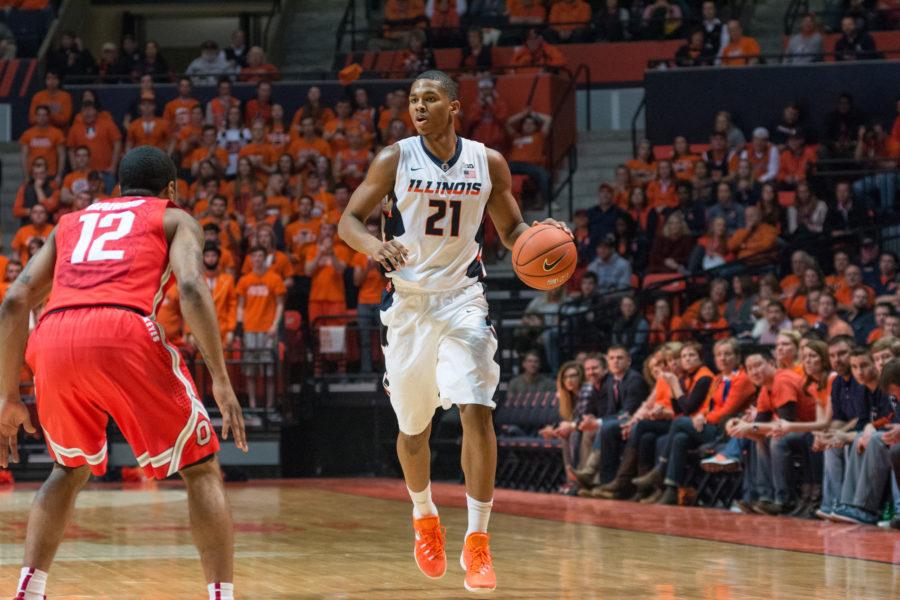 Illinois’ Malcolm Hill brings the ball up the court during the game against Ohio State at the State Farm Center on Thursday, January 28. The Illini lost in overtime 68-63.

It’s no secret: The Illinois basketball team has been riddled with injuries and sickness since the start of the 2015-16 season.

With one week between games and a couple days off from practice during that span, Illinois (11-13, 3-8 Big Ten) has the opportunity to heal, regroup and prepare for its Saturday matchup at Northwestern (16-8, 4-7 Big Ten).

“Obviously, we’ve got six days off,” coach John Groce said. “We’ll take (Monday) off. We may even take another day off this week just to get some of our bodies back right.”

“Rebounding was an issue,” Groce said. “We’ve got to block out better. We’ve got to pursue balls better. That’s important to get cleaned up, obviously, this week.”

Junior Malcolm Hill has shouldered much of the team’s rebounding with Thorne and Leron Black missing with meniscus tears. The 6-foot-6 swingman is averaging 6.3 boards per game, and he has 22 over his past two outings.

But it hasn’t been enough.

There is one Illini player who, if healthy, is a game-changer in that statistical category. Team rebounding should improve immensely if Illinois’ leading rebounder from the first month of the season, Mike Thorne Jr., is able to return for meaningful minutes in Evanston.

Injuries have also plagued the other side of the ball.

Junior guard Kendrick Nunn has looked rusty in his two games back from a hip contusion suffered Jan. 31 versus Wisconsin. He shot 3-of-13, though he snagged 13 rebounds, in a triple overtime win against Rutgers on Feb. 3 and went 2-of-13 for six points in the loss to Iowa.

Meanwhile, forward Michael Finke returned from a knee contusion Sunday and played 17 minutes. He, too, struggled to find his usual tempo against Iowa and finished with just 5 points on 2-of-6 shooting.

Groce said the extra time off may help Nunn and Finke get back to 100 percent health, so they can find more of a rhythm against the Wildcats on Saturday. Hill, who plays the most minutes, guards the opponent’s best player and is often double-teamed, could also benefit from additional rest.

“We’ve had some guys play a lot of minutes, and we’ve got some guys that are dealing with some nicks and knacks and ailments and hurts and injuries,” Groce said. “So we want to give us an opportunity to get some of our guys healthy with the six days. But at the same time, we’ve got to get better too.”

Freshman sharpshooter Jalen Coleman-Lands was the bright spot Sunday, posting 17 points on five made 3-pointers and 6-for-13 shooting from the field. Expect graduate transfer Khalid Lewis – who has gotten the lion’s share of the point guard minutes over the last few games – to try to find Coleman-Lands on the wing in Evanston this weekend.