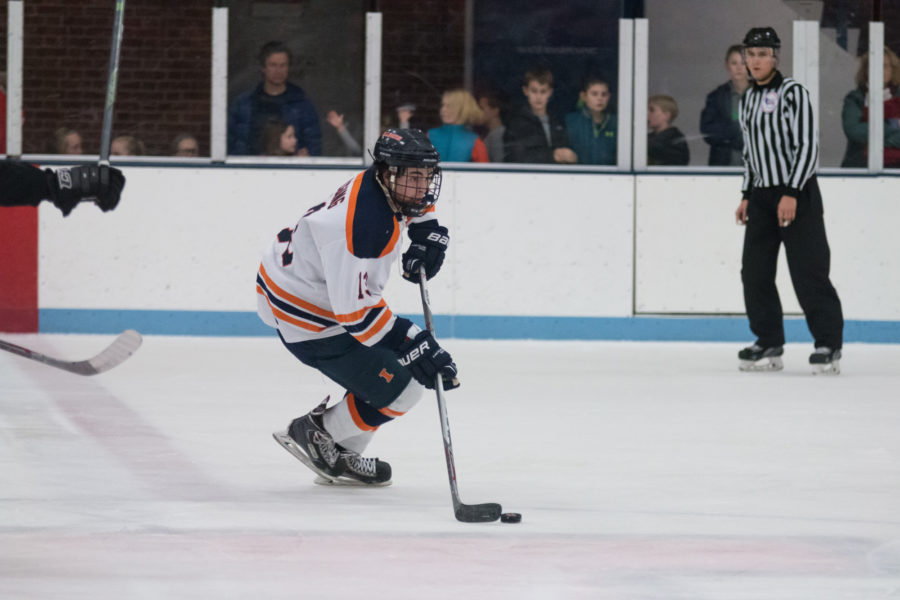 Illinois' James Mcging carries the puck up the ice during the game against Lindenwold University at the Ice Arena on Saturday, January 30. The Illini lost 4-1.

It’s Valentines Day weekend, and frustration, not love, is in the air for the Illinois hockey team, and time is running out to clear that air.

There are two games left before the CSCHL tournament and this is the Illini’s last weekend to play their way into the national tournament. They’re coming off one of their most disappointing weekend series of the year.

The team is in the middle of a three-game losing skid, including dropping a two-game set with conference rival Ohio last weekend. Illinois held a 4-1 lead after the first period of game one, but the Bobcats scored six straight on the Illini to pick up the win. Ohio followed up on its Friday display by hanging six more goals on Saturday, to win 6-2 and send Illinois home with a third straight loss.

The tension seemed to peak over the weekend when sophomore forward James Mcging garnered an ejection for an unsportsmanlike conduct in the third period of game one, but he said the team is still feeling the effects of the losses.

“I think everyone is pretty frustrated coming out of that weekend,” Mcging said. “They were a really good team, but coming out with zero points, especially when the games matter so much, kind of hurts the morale.”

Illinois will get a chance to relieve the pressure this weekend. It takes on Illinois State in a two-game series. This will be the second meeting between the teams, who split a series back in October.

If the Illini are to right the ship, they will have to address some glaring holes in their game this weekend. After giving up 13 goals against Ohio, head coach Nick Fabbrini said the team has to tighten up on the defensive end.

“Our defensive zone needs to get a lot better. Giving up 13 goals in a weekend is never a good thing,” Fabbrini said. “Now that we’re starting to score a little more it seems like we’re starting to spring a few leaks back there and have some breakdowns (on defense).”

The Illini are sitting just inside the 20-team field for the national tournament that will take place March 3-8 at Robert Morris University.

For Fabbrini, the team’s seeding is not the issue — the Illini are currently projected to play in the opening round as a low seed. He is focused more on his team’s ability to play on a game-by-game basis, something he is very confident in.

“I think that we’ve proven we can beat the best teams in the country, and we probably have the best goaltender in the country,” Fabbrini said. “In one-loss situations it’s a great asset to have your best player be your goaltender. If we can tighten things up in front of our goaltenders and get healthier in all aspects of the game we will have a great shot to make some noise.”